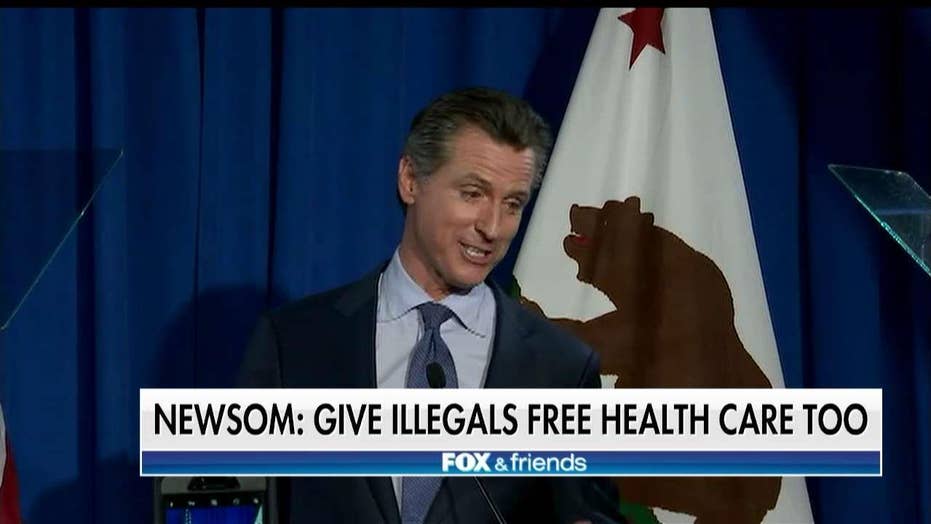 California has escalating crime, cities teaming with homeless people, clogged and crumbling roads, massive unpaid bills, some of America’s highest taxes, and some of its worst public school systems.

So what’s the plan by Gavin Newsom, the Democratic Party’s candidate for governor, to improve the situation? On Tuesday he suggested giving free health care to illegal immigrants.

Speaking on a left-wing podcast, the former mayor of San Francisco said: “I did universal health care when I was mayor, fully implemented, regardless of pre-existing condition, ability to pay, and regardless of your immigration status. I’d like to see that extended to the rest of the state. San Francisco is the only universal health-care plan for all undocumented residents in America.”

Thus continues California progressives’ war on the state’s law-abiding and productive residents, especially its middle class. If Newsom becomes governor, they may get to pay for health care for people who don’t even belong in the country and can’t or won’t pull their own weight.

It’s unclear if Newsom and his progressive allies understand that dispensing a growing list of government benefits to groups of people creates an unwanted magnet effect. In 2016, Los Angeles voters approved a bond initiative throwing an extra $1.2 billion at the spiraling homeless problem – on top of existing programs. The result: more homeless people and more crime.

Some blame pleasant weather and high housing costs for California’s homeless crisis, but those factors exist in other states. The difference in California is lavish benefits for homeless people and kid-glove treatment because the police have had their hands tied by progressive politicians and judges.

The result is the opposite of the “broken windows” policing of petty crimes that Rudy Giuliani used to save New York City from mayhem when he was mayor. Instead of cops incentivizing people to meet minimum standards of society – like not shooting up drugs or relieving themselves in public –police must stand by and watch communities decay.

Judging from the demonstrated magnet effect of expanded benefits for the homeless amid general lawlessness, what can we now expect free health care for illegal immigrants to produce?  The answer is more of them. Not only will they come to California from other states for “free” services, more will be tempted to come illegally into the U.S. from Mexico.

If you think this bad idea will be confined to California, think again. Newsom would achieve universal health-care coverage for illegal immigrants by expanding the state’s Medicaid program, which is known as Medi-Cal.

Currently the federal government pays an unbelievable two-thirds of this California program. Unless Congress takes action, taxpayers from across the nation could soon be on the hook for much of this new handout.

Newsom’s promise is particularly bad news for middle-class Californians. They don’t have high-paying jobs in tech or entertainment that enable them to live in places like Newsom’s posh Russian Hill neighborhood in San Francisco, send their kids to private schools, pay cash for medical concierge services, or drive Teslas and other luxury cars.

Middle-class Californians must contend with the crime and the distressed freeways, schools, and crowded hospitals that uncontrolled illegal immigration has produced by straining resources.

Some California locales are even starting to water down the voting rights of citizens by letting illegal immigrants cast ballots in some elections – a step San Francisco will begin in elections this November. This comes on top of any voting by illegal immigrants due to California’s lack of a requirement to show a photo ID to vote.

This silliness has to end. Newsom’s Republican opponent for governor, John Cox, has made clear he would work with the federal government to get tough on illegal immigration, including by supporting commonsense steps like a border wall. But Cox faces long odds in a state where government unions and a rich coastal elite have built a formidable political machine.

Congress may have to step in. Ultimately it’s not up to California’s progressives to decide who gets to be a citizen and whether people who are here illegally should get lavish handouts paid for with Americans’ money. Congress must protect the voting and taxpayer rights of U.S. citizens in California – and across the nation.