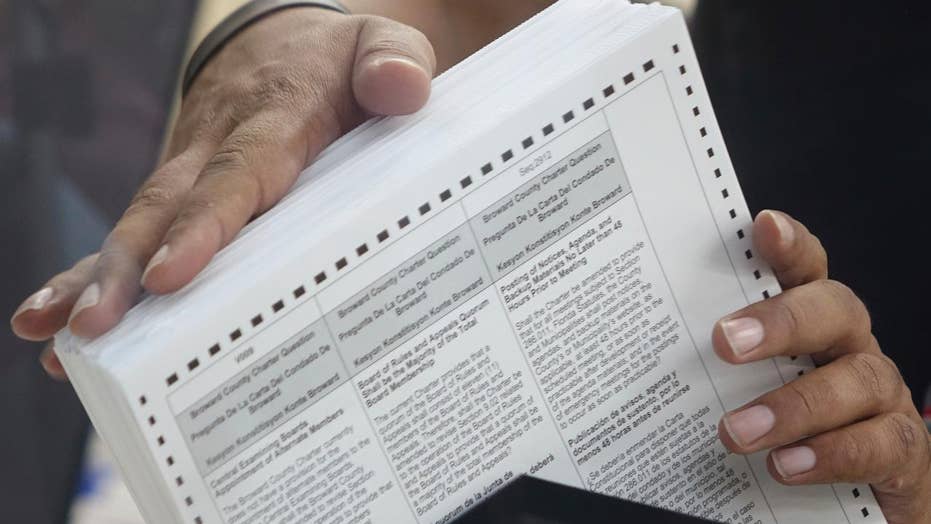 Sen. Marco Rubio, R-Fla., had the best line when it comes to the latest Florida election in which contests for governor and the U.S. Senate are still undecided.

With lawyers descending on the state in what looks to some like a replay of the 2000 “hanging chad” presidential election, an automatic recount has been triggered for both contests.

President Trump and other Republicans are crying foul and accusing Democrats of trying to “steal” the election. Given the history of voter fraud in this country and the heavily Democratic makeup of Broward and Palm Beach counties, their suspicions may be justified.

Snipes has engaged in other behavior that has raised concerns about her competence and nonpartisanship, including again in 2016 when she “accidentally” posted election results 30 minutes before polls closed.

Vote-stealing isn’t new. After the initial vote count in the 1948 Texas Senate race, which saw Lyndon Johnson losing to his opponent Coke Stevenson by 20,000 votes, previously “unreported precincts” and other “adjustments” were made in the vote totals. Johnson came out the winner by a mere 87 votes, earning him the derisive title “Landslide Lyndon.”

In the 1960 presidential race, which saw the tightest popular vote margin since Grover Cleveland defeated James Blaine in 1884 by just 23,000 votes, Republicans claimed Richard Nixon was robbed. As Politico reported in a 2016 article, “In Illinois, (John F. Kennedy) won by just 8,800 votes, largely due to margins in Chicago, where Mayor Richard Daley — a Kennedy stalwart — tightly controlled the Cook County organization. In Texas, home of his running mate, Lyndon Johnson, the Kennedy-Johnson ticket won by a margin of 46,000. Had Nixon carried both states, he would have won the Electoral College, 270 to 252.”

In the 2008 Minnesota Senate race between Republican incumbent Norm Coleman and Democrat Al Franken, Coleman won the election by the narrowest of margins. According to CNN, “The initial count from the November 4 election put Coleman, a first-term senator, 215 votes ahead of Franken.” The slim margin triggered an automatic recount. The canvassing board finally determined that Franken “won by 225 votes.”

After Franken was sworn in, a conservative group called Minnesota Majority began investigating claims of voter fraud. The group found 1,099 felons, all of them ineligible, had voted. As John Fund and Hans von Spakovsky note in their book “Who’s Counting?: How Fraudsters and Bureaucrats Put Your Vote at Risk,” most felons favor Democrats when they can vote.

Which brings us back to Florida. With vote margins in the races for governor and Senate so tight, Republicans are worried that history will repeat itself.

Brenda Snipes, the supervisor of Elections in Broward County, has held her job for 15 years. Her history, to put it charitably, has been checkered. Last May, a judge ruled that Snipes violated federal and state election laws when she destroyed ballots in the 2016 congressional race in which Tim Canova lost a primary contest to incumbent Rep. Debbie Wasserman Schultz.

In August, a judge ordered Snipes to stop opening mail-in ballots in secret. Snipes has engaged in other behavior that has raised concerns about her competence and nonpartisanship, including again in 2016 when she “accidentally” posted election results 30 minutes before polls closed.

The recount process will be anything but pleasant. Snipes and others who are responsible for this dysfunctional, incompetent and possibly criminal behavior should be replaced, the sooner the better for Florida and for the country.