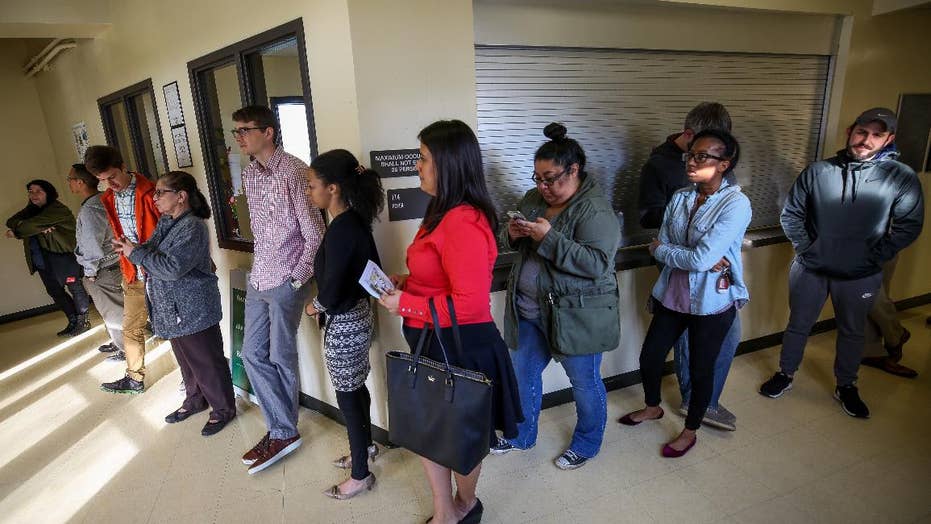 What does a blue wave mean for 2018 midterm elections?

Republican and Democratic voters to battle for election wins.

The media narrative has been set: a “Blue Wave” is coming in the 2018 midterm elections, as agitated Democrats and independents react to the first years of the Trump Administration.

The trend in the generic ballot test, turnout in special elections, and fundraising to date benefiting the left, all provide some evidence that supports Democrat gains. However, we also see nuance in the data that provides a path forward for Republicans who run smart campaigns: namely, there is a significant opportunity for Republicans to attract more votes from Hispanic voters.

Based on historical results, it is fair to assume Hispanics will mostly support Democrat candidates next November.  In part, this is because many Republicans typically make very little effort in trying to attract Hispanic voters. However, it is also true that Republicans tend to perform better among Hispanics in midterm elections than in presidential elections.

Nonetheless, we know that, in order for our party to thrive in the future, we must improve our performance at the ballot box among Hispanic voters.  That starts by having conversations with this growing population about issues they care about, while finding common ground between conservatives and the Hispanic voting population.

Personal choice, competition and freedom are all themes that resonate with Hispanic voters.

Indeed, in a recent study our firms jointly fielded on behalf of a corporate interest, we found that nearly two-thirds of Hispanic voters (65 percent) indicated a willingness to cross party lines for candidates who reach out to them.

This bipartisan study, performed by WPA Intelligence, Deep Root Analytics and Civis Analytics, collected 3,000 interviews of Hispanic adults nationwide in December and January, and the results are encouraging for Republican candidates looking to mine hidden pockets of support in the upcoming election.

It is critical to be mindful that American Hispanics are not a monolithic voting bloc.

As with any other segment of the voting public, there are many nuances and distinctions that are driven by views on policies, age, educational attainment, occupation geography, country of origin, and family history in the U.S.

Indeed, Republican candidates who understand this and aggressively focus developing a relationship with Hispanics across their constituent bases have realized significant gains by way of support at the ballot box.  In Texas, a state the national press is desperate to say is “trending Blue,” both Governor Abbott and Senator Cruz, each received more than 40 percent of the Hispanic vote in past elections.

While many Democrats often appeal to Hispanics on the basis of “identity politics,” we recommend Republicans engage in “idea politics.”

Four key issues provide a path for Republican gains among Hispanic voters: tax cuts, repeal of the individual insurance mandate, an “all of the above” energy policy and school choice.

As more Hispanics ascend the ladder of economic opportunity, their personal experience more closely aligns with a Republican worldview that sees the risk posed by over-taxation and over-regulation. America is home to hundreds of thousands of Hispanic business owners, including many small business owners who see excessive government overreach as a greater problem than underfunded social welfare programs.

Nearly half of Hispanics surveyed also oppose the government mandating the purchase of products like health insurance. While surely valuing a safety net for the poorest of Americans, these voters know how expensive it is to pay skyrocketing insurance premiums under ObamaCare. Republicans can make inroads on this issue of personal freedom.

Similarly, a message emphasizing choice and competition works when it comes to energy production and education. Almost half of Hispanic voters – 47 percent -- support an “all of the above energy policy” that incents production from conventional generation sources, in addition to renewable sources. And despite 25 years of education unions demonizing school choice, 43 percent of Hispanic adults – three in seven – believe parents should have public and private school options to educate our children.

Personal choice, competition and freedom are the themes that resonate with Hispanic voters open to these Republican ideas. These voters do not think students in failing public schools should be sentenced to a life of lesser opportunity because of where they happen to live. While supporting a legitimate role for government, many also support a limited role for government, ensuring an economic climate conducive to job creation, and health and energy policies steeped in competition in order to control costs. They embraces the free market ethos of America. And they believe in the American Dream.

But Republican appeals to Hispanic voters are not made in a vacuum. The well-funded message machine on the left, assisted by the mainstream media, will surely change the debate from ideas to identity politics. They will cast the Trump immigration policies as divisive, and the only issue Hispanic voters care about. We encourage Republican candidates to not succumb to single-issue thinking.

Hispanic issues are American issues, and American issues are Hispanic issues. If Republican candidates want to survive the 2018 mid-terms, they need to not only develop a message centered on freedom and choice, but to use modern tools like data analytics to help them use their limited resources to deliver that message with precision to voters who are open to it.

Many firms, in addition to ours, are doing innovative work with such digital tools, allowing campaigns to take their message directly to the right voters, in the right format, with personalized appeals on issues they care about passionately.

In many districts this election year, the key will be developing messages that appeal to Hispanic voters. Winning in a challenging election cycle requires mining for voters, even among traditional Democratic constituencies. The Republican campaigns that do this are more likely to be victorious.

Chris Wilson is a Republican pollster and data analyst who worked for the Ted Cruz presidential campaign, and represents Republican clients in more than 44 states.