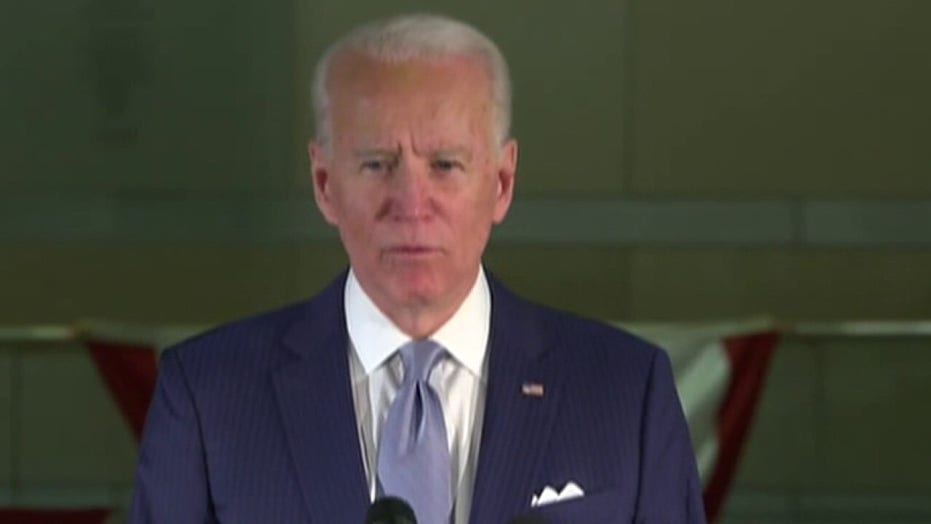 Peter Doocy reports from Cleveland, Ohio after the Democrat candidates canceled their election night rallies in the state.

Another primary Tuesday has come and gone. And another night with a lot of victories wrapped up in favor of former Vice President Joe Biden.

It would seem Biden has cemented himself as the front-runner for the 2020 Democratic race, so what should Democrats do now? And, specifically, what should Biden and his rival Sen. Bernie Senators, I-Vt., do?

Here are five of my ideas.

TUCKER CARLSON: BERNIE SANDERS  IS LOSING BECAUSE HE'S WEAK. HE MAY BE THE LAMEST REVOLUTIONARY EVER

1. Bernie needs to face the music

Biden won big Tuesday night on "mini Super Tuesday," with victories in Mississippi, Missouri,  Idaho and, most importantly, delegate-rich Michigan. Although Sanders picked up a win in North Dakota and Washington state is still too close to call as of this writing, Biden extended his delegate lead significantly.

There are whispers that Bernie should step down and throw his support behind Biden to help unite the party. Of course, there are those who want this to play out, but if it does, and if Sanders hangs on even through next Tuesday; the forecast is dim for further victories for the Vermont senator. Catching up to Biden’s delegate count will prove difficult.

Democrats need to recognize the strength of the older voters and work hard to find out why young people aren't voting and how to get them to come out.

Next week. states like Florida and Ohio are likely to go to Biden. Looking further out, there is nearly zero chance that Bernie will win Pennsylvania or Delaware. This is a numbers game and Sanders, as well as his campaign staff, know the writing is on the wall. The sooner a Democratic nominee can be recognized, the more momentum Democrats can have to propel forward toward the general election in November.

2. Democrats  need to recognize their strengths as well as their weaknesses

In Michigan last night, the results were particularly positive for Biden, who won statewide support and increased turnout dramatically. For example, 1.2 million people turned out in 2016, and that number rose to 1.7million this year. Fox's voter analysis has shown the age gap both Sanders and Biden face. Biden turned out the older voters significantly, while Sanders relied on younger voters.

Twice as many seniors turned out as young voters. So Democrats need to figure out how to get youth, who are very active on social media and attend rallies and protests, to get out and vote.

If they backed an old white guy like Bernie, will they do the same for Biden? So Democrats need to recognize the strength of the older voters and work hard to find out why young people aren't voting and how to get them to come out.

3. Biden has to up his game

Although the gaffes coming out of Biden’s mouth are nothing new – he’s been making them for decades – if he ends up being the Democratic nominee, the opposition will undoubtedly focus on this. They will play it up, mock it and even edit it on social media. Biden has to get a handle on that and prepare for the fight of his life, and for the party’s life, now and looking ahead to debates with President Trump. Biden has to get stronger, be quicker and decide if he’s going to fight fire with fire – debating on Trump’s level, where personal attacks and insults are commonplace – or if he’s going to take the advice of his BFF’s wife, Michele Obama, who said, “When they go low, we go high."

4. The Bidens need to prepare a Burisma defense now

If Biden becomes the Democratic nominee, the GOP will start investigations about Burisma and Joe’s son Hunter Biden’s dealings with that company. Biden and the Democrats need to be on the offense with this, learning from the flamethrowers of the Benghazi investigations and the "Oh, but her email" days with Hillary Clinton when she was Trump’s competition for the White House.

Democrats were divided along moderate-centrist and liberal-progressive lines in 2016. That helped Trump win. This time around, if Bernie steps down and Biden is the nominee, Sanders needs to campaign big time for his party's standard-bearer. He will have to throw his full-fledged support and lead the followers of his revolution to come out and vote for  Biden. Here's what they all need to remember: exit polls show numbers as high as 92 percent of Democrats consider unseating Trump their personal and the party’s top priority.