Judging from the flurry of headlines about racial discrimination and teaching history in schools, you could easily forget that school was out for the summer. But some students have already returned, and the rest will be back at their desks before you know it. So will the grownups settle the issue before all of them are back in class?

Consider what White House press secretary Jen Psaki said when asked what President Biden thinks about educators using critical race theory – a philosophy that, ironically, pushes racially discriminatory ideas: "There is not just racism and slavery in our history … children should learn not just the good, but also the challenging in our history."

TUCKER CARLSON: SCHOOLS ARE CREATING TRIBALISM IN OUR KIDS

Psaki’s response is confusing because just weeks earlier, the U.S. Department of Education recommended that teachers use reading material from the New York Times’ 1619 Project – which, the Times says, "aims to reframe the country’s history by placing the consequences of slavery and the contributions of Black Americans at the very center of our national narrative."

So after the Education Department told teachers that racism and slavery should be "at the very center of our national narrative," the White House press secretary said there is more than "racism and slavery in our history." (After the agency received some 35,000 comments to its announcement recommending the 1619 Project, the office retreated from this position. We can safely assume not all the comments were positive.)

The two largest teacher unions in the U.S. are also sending mixed signals. At the National Education Association’s annual meeting earlier this month, union members approved a business item stating that they would make sure teachers continue to use critical race theory in class. Just days later, American Federation of Teachers President Randi Weingarten said the theory is not used in K-12 schools at all today.

So does critical race theory have something to offer besides racial discrimination? Are teachers including the theory in instruction? And do teachers need it for history classes or not?

Critical race theory is a philosophy that law school professors developed in the 1980s. The theory says everything in public and private life – your job, government, school – must be considered with respect to racial identities. The theory is "critical" because advocates based the ideas on Marxist notions of oppressed workers, which stems from a school of thought from the 1930s called "critical theory."

Theorists are skeptical of American law and the concepts of freedom and rights that glue our government and culture together. In Orwellian fashion, critical theorists call their ideas "anti-racist." But Montana Attorney General Austin Knudsen exposed the racially biased principles of critical race theory in an opinion he issued in May.

"By its own terms, antiracism excludes individuals who merely advocate for the neutral legal principles of the Constitution," he said. Knudsen adds that critical ideas leave no room for debate. "No one can be antiracist," he says, "who does not … embrace the specific public policy proposals of CRT."

Perhaps worst of all, critical race theory argues that the American Dream is not available to everyone.

The challenge for parents, teachers and policymakers, and what has attracted the attention of state policymakers, is that critical race theory is racially discriminatory. Students have been divided into groups according to skin color for certain school activities. Children are told that oppressors can be determined by the color of their skin before even considering someone’s actions. 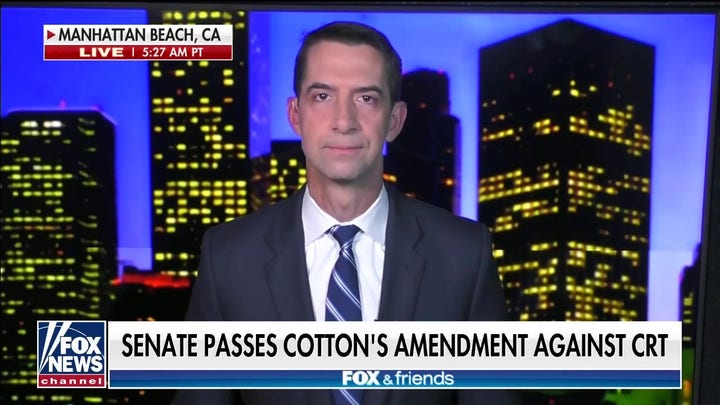 Perhaps worst of all, critical race theory argues that the American Dream is not available to everyone – America is systemically oppressive, individual effort and determination be damned.

Education is a state and local concern, but we can still applaud some federal officials for rejecting the application of CRT’s racial discrimination in schools. Sen. Tom Cotton, R-Ark., recently introduced a non-binding amendment to the Senate’s budget resolution that says federal funding cannot be used to "compel teachers or students to affirm critical race theory," and lawmakers narrowly approved it 50-49.

Though the amendment itself won’t curtail federal funding for CRT (to do that, Congress would need to pass further restrictions on funds), the provision is a good example of how to deal with critical race theory’s prejudice.

While progressives decide how to explain away critical race theory’s bigotry, parents and policymakers should call the theory what it is – discrimination – and reject it. We can get that settled before kids go back to school.

Jonathan Butcher is the Will Skillman Fellow in Education at The Heritage Foundation (heritage.org).