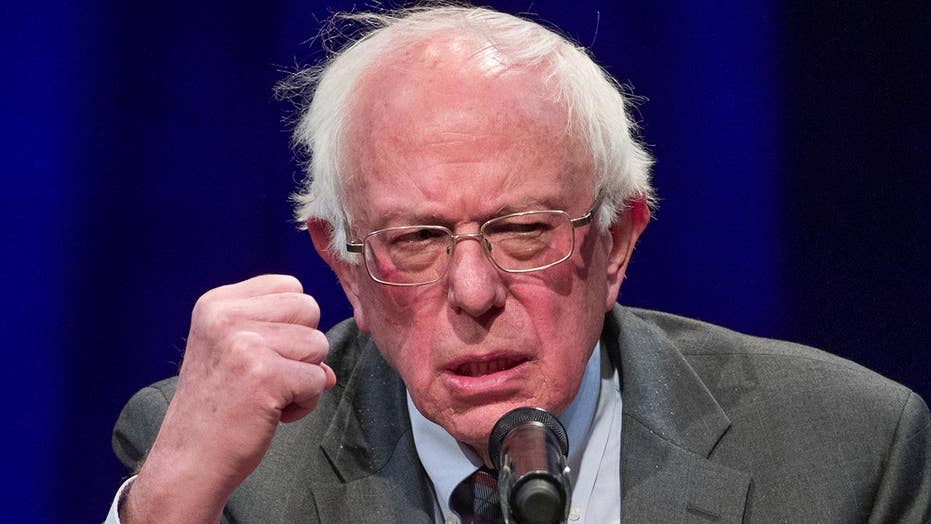 Sen. Bernie Sanders, I-Vt., the aging socialist, recently announced his second presidential run. Even though he lost his last presidential bid, he has successfully moved the Democratic party to the far left.

Of course, the Internet remembers everything forever. Right after Sen. Sanders' announcement, an old interview he gave in 1985 surfaced on social media. In the video, Sanders, then-mayor of Burlington, Vermont, was asked about the long breadlines in Nicaragua. He gave this answer:

"It’s funny, sometimes American journalists talk about how bad a country is because people are lining up for food. That is a good thing! In other countries, people don’t line up for food. The rich get the food and the poor starve to death.”

HEY, DEMOCRATS, I'VE LIVED IN A SOCIALIST COUNTRY WITH INCOME 'EQUALITY' AND IT WAS MISERABLE

Sen. Sanders is a very lucky guy. He grew up in a free society with a market economy that supplies an abundance of choices. As a career politician, he earns an annual salary of $174,000, which is more than three times the median U.S. household income of $56,516.  And his net worth is estimated to be as much as $2 million, more than 20 times the median net worth of the average U.S. household, which is $97,300.

Sanders has a history of expressing sympathy and support for leaders of Communist/Marxist revolutions in Latin America despite their troubling records of human rights abuse and the disastrous economic outcomes caused by their socialist policies.

I doubt he's ever had to stand in line for food because had he, even once, he would not have thought it was a good thing. I know, because my family and I did.

Images of Venezuelans standing in line for food make my heart ache. Despite what Bernie Sanders said in 1985, breadlines are immoral. They symbolize the failure of socialism. The only equality socialism has managed to achieve, no matter where it is practiced, is misery. Anyone who thinks breadlines are "good" undermines the suffering that millions have endured.

I was born in Chairman Mao's Communist China. Growing up, there was a shortage of everything: food, clothing, shoes, and medicine.

The government controlled the distribution of essentials such as rice and cooking oil to every citizen through a rigid ration system, maintained through coupons. Those coupons were not for getting a discount – they were used to restrict the amount of essentials we were allowed to have on a monthly basis.  Hunger was a constant feeling.

We were also constantly reminded that just because we had a coupon, it didn’t mean there were goods to buy in the store. It was a constant and exhausting endeavor to get our hands on the basics so that our family could survive.

That was why my parents often had to get up at three or four o’clock in the morning and stand in lines in front of two different grocery stores, waiting for a pound of sugar or flour. If they showed up late, they knew the only thing waiting for them would be empty shelves.

Yet, according to my parents, we were still lucky because we all survived. Their generation had to live through the worst famine in human history, the "Great Chinese Famine" from 1959 to 1961, which was caused by Chairman Mao's ruinous socialist policies.

Official archives about the Famine are still mostly sealed by the Chinese government and difficult to access. We can only estimate that the death toll during the Chinese Famine ranged between 30 and 60 million. Among these perished souls was one of my dad's younger brothers.

This is why images of Venezuelans standing in line for food make my heart ache. Despite what Bernie Sanders said in 1985, breadlines are immoral. They symbolize the failure of socialism. The only equality socialism has managed to achieve, no matter where it is practiced, is misery. Anyone who thinks breadlines are "good" undermines the suffering that millions have endured.

Of course, Sen. Sanders and Democratic socialists in this country insist real socialism hasn't been tried yet. What happened in Mao's China and Maduro's Venezuela has nothing to do with socialism – those circumstances were caused by the authoritarians who ran those countries, they say.

Sen. Sanders and Democratic socialists promise us they will do socialism right this time. But what they promise us has been promised many times before. Neither Stalin nor Mao nor any other socialists ever declared that their goal was to bring starvation, mass murder and unimaginable misery to their people. In the early days of their revolutions, they all had good intentions and they all won popular support by painting a rosy picture for all: Everyone will have adequate food, housing, health care, child care and education. Sound familiar?

The problem with socialism is not the intentions, but the means necessary to turn those intentions into reality, and the poor results they produce.

Socialism and democracy are incompatible. Socialism always leads to authoritarian dictatorship because socialists want everyone else to live only in the way they approve.  But that's anti-freedom and anti-human nature. Therefore, the only way socialists can get everyone on board is by using force.

Americans got a glimpse of this recently through Rep. Alexandria Ocasio-Cortez's "Green New Deal” (GND). Should the GND become a reality, the government will force you to retrofit your home and tell you how to travel, whether you like it or not.

It's both sad and dangerous that socialism has become popular in the U.S., especially among the youth. Have we already forgotten the 100 million deaths attributable to Communism/Socialism over the last 100 years?

It will be critical to call out the nascent totalitarian that lives in the heart of every socialist. I do so in the name of my uncle. And I call out Sen. Sanders in the name of the millions of Venezuelans suffering the foreseeable outcome the Maduro and Chavez regimes.