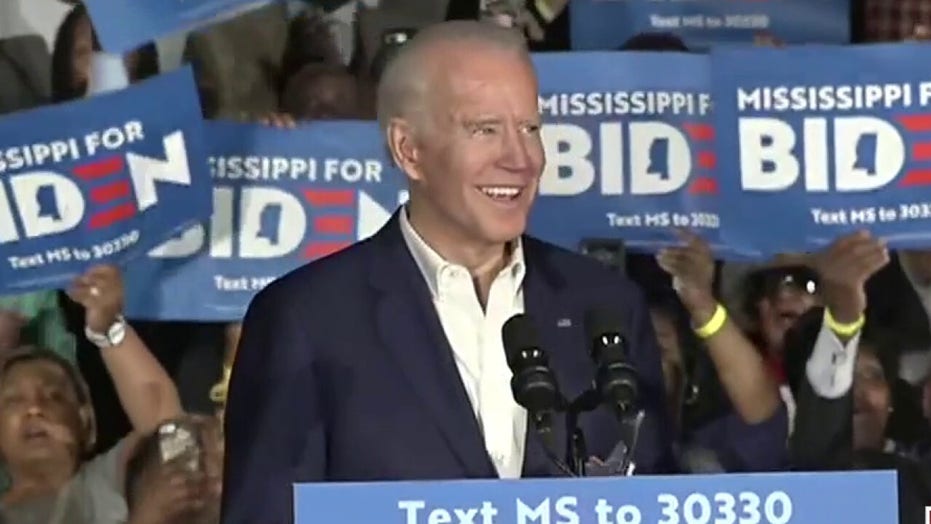 In the 10 days from the South Carolina primary to Michigan’s, Joe Biden went from a candidate almost incapable of uttering a coherent debate point to a prohibitive favorite to win the nomination – and arguably in stronger shape for the race against President Donald Trump in November.

How’d it happen so fast?

Heading into the primary season, Democrats were united around one theme – how to beat Donald Trump. They may have been divided over whether to fight for “Medicare-for-all.” They may have had different positions on how to address climate change. And they certainly disagreed about whether to accept the support of high-roller campaign donations or even whether billionaires had a right to exist.

LESLIE MARSHALL: AFTER BIDEN'S LATEST WINS HERE ARE 5 THINGS DEMOCRATS MUST DO NOW

But they were in touch with their anger. And they were angry about Donald Trump.

Trump had humiliated them by winning in 2016, despite everyone assuring them that Hillary Clinton couldn’t lose. And his personal “never give an inch” style kept rubbing their noses in that defeat – from his assembly line of judicial appointments to the Republican Senate majority leader's self-proclaimed willingness to act as the “Grim Reaper” for what he called “socialist legislation” coming from the Democratic majority House of Representatives.

After three straight wins in the presidential race, Vermont Senator Bernie Sanders was the clear front-runner. He brought the most supporters to the Iowa Caucuses (even if he did lose the delegate count), he won New Hampshire, and he decisively trounced all opponents in Nevada.

But the secret to Sanders’ success was ultimately the cause of his doom: his fierce support for his agenda, coupled with a very energetic persona in arguing for that agenda and an apparent unwillingness to compromise to expand support. Indeed, the day after he won Nevada,  he was “60 Minutes” defending the late Cuban dictator Fidel Castro, refusing to attend a meeting of the American Israel Public Affairs Committee, and attacking the current Israeli government as racist. Not a recipe for victory, especially in Florida.

As one of the smartest political analysts I know said to me just before South Carolina, “There’s a way this thing really does just fall into Biden’s lap.”

In the meantime, Biden was busy demonstrating that he was “safe old Joe.” Brandishing his Obama bona-fides and the endorsement of Congressman Jim Clyburn, the former vice president decisively won the African-American vote, and the primary, in South Carolina. By Sunday, just one day after that victory, in private polls of upcoming states, we saw the initial signs of further movement toward Biden, even in the states without large African-American populations.

The word was out to the voters (if not yet to the politicians) that it was a two-person race. By Monday the slow buildup of support for Biden began to look like an avalanche. Former Mayor Pete Buttigieg and Sen. Amy Klobuchar dropped out of the race and endorsed Biden, and billionaire Michael Bloomberg was clearly faltering. One could look at the data and wonder if Biden had enough time to catch up to Sanders, but the direction of the race was clear.

As one of the smartest political analysts I know said to me just before South Carolina, “There’s a way this thing really does just fall into Biden’s lap.”

A week after winning 10 of 14 “Super Tuesday” contests, Biden secured victories in the three most important contests on “Echo Tuesday.”

That left Sanders no apparent route to the nomination. The democratic socialist was on his back.

And where is the race now?

Sanders says he’s staying in, less to contest the nomination than to ensure that the Democrats embrace his platform. While some say his continued campaign will only help Trump’s reelection, I’d argue that it’s the second-best piece of news Biden has received since the recent primaries.

Sanders will be his sparring partner, as Biden argues that he’s both best equipped to achieve many of the policy goals Democrats have while also presenting himself as a “majoritarian” alternative to either the radical policies Sanders is espousing or the policies Trump is implementing.

A century ago, John Reed wrote “Ten Days That Shook the World,” a sympathetic account of the Russian revolution that showed how the Communists took advantage of widespread opposition to the tsars to beat the divided moderate elements and create the Soviet Union. In these last 10 days for the Democratic party, the moderates have figured out a way to consolidate that opposition and may be well placed for November.

Bottom line: the nomination does seem to have fallen into Biden’s lap. And with the coronavirus crisis forcing him to limit campaign appearances to controlled settings where he can speak off a teleprompter – arguably his best setting – I’ve got only one question: What “number” does Biden recommend playing in the lottery?