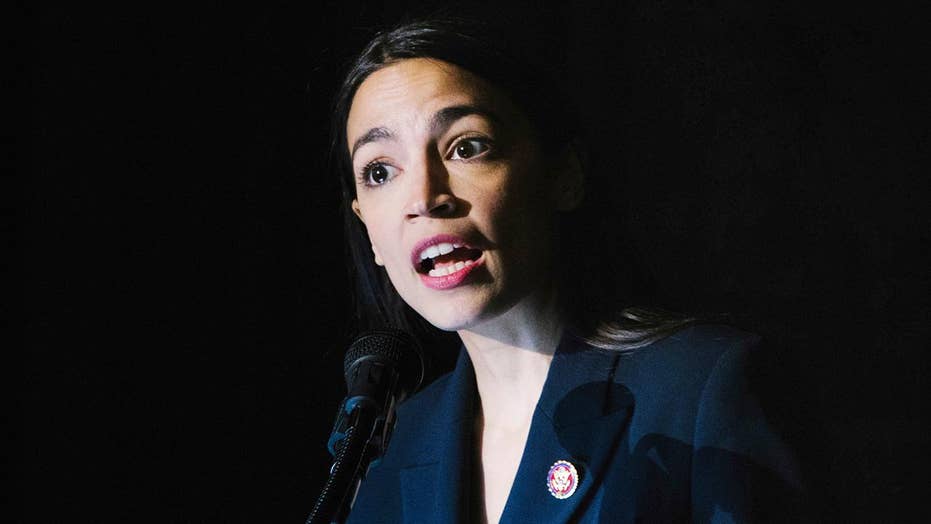 After a torrent of criticism over a FAQ posted on Rep. Alexandria Ocasio-Cortez's website, Democrat supports are labeling the document an 'aspiration' to do better; Doug McKelway reports.

All it took for the entire Democratic Party to lurch to the left was less than 5,000 votes in New York City – the margin of Rep. Alexandria Ocasio-Cortez’s, D-N.Y., primary victory. Since her election, Rep. Ocasio-Cortez has proven time and again that she’s not done moving the Democrats all the way into the Pacific Ocean. Her “Green New Deal” underscores this point.

The “Green New Deal” is not legislation. It’s a fourteen-page, double-spaced, non-binding resolution that reads like Karl Marx’s Christmas list. The resolution is a Soviet-style central planning document calling for a government takeover of the agriculture, transportation, housing and health care sectors, while seeking to limit competition and eliminate free markets wherever possible.

The fact that so many Democrats have signed onto this drivel demonstrates how otherwise serious lawmakers are now beholden to the extreme left.

After he was elected senator in 2013, Markey’s role in the upper chamber has largely been playing second fiddle to the louder and more extreme liberal Sen. Elizabeth Warren. But after seeing fellow milquetoast Democrats go down in their primaries in 2018 – including home-state colleague and now ex-Representative Mike Capuano – Markey is now trying to protect his left flank by helping Ocasio-Cortez with her fever dream socialist resolution.

Sadly, the Democratic Party of Ocasio-Cortez has moved so far to the extreme that eating meat is murder, but killing a baby moments after birth is a choice.

What is lost in the climate change hyperbole from left-wingers like Ocasio-Cortez and Markey is the fact that the U.S. is already the leader on environmental issues in spite of oft-criticized actions like withdrawing from the Paris Climate Accord.

The U.S. has the cleanest air on record, and energy-related carbon dioxide emissions will likely decrease in 2019 and 2020 while our economy continues to grow. On a per capita basis, emissions are at their lowest level in nearly 70 years thanks to fracking and abundant natural gas. While the U.S. has been making continual progress, the rest of the world has increased their emissions.

The Green New Deal is now overshadowing real bipartisan legislation that would actually reduce carbon dioxide emissions. Sen. John Barasso, R-Wyo., introduced the Utilizing Significant Emissions with Innovative Technologies Act (USE IT Act) which offers $50 million in financial incentives for carbon-capture research and infrastructure, such as innovative systems that take carbon dioxide out of the atmosphere and smokestacks. The bill is co-sponsored by Sen. Sheldon Whitehouse, D-R.I., – a climate hawk who has not signed onto the Green New Deal, perhaps because he’s not running for president.

This type of legislation fits squarely with the president’s successful energy dominance agenda because it enhances innovation without limiting our position as an energy superpower. Our entire economy is built on successful production, efficient development and affordable use of fossil-based energy sources. The path of the future is not to shut off use of these resources, but to continue to develop them in the cleanest, most efficient way possible, and then share these innovations with the world.

Unfortunately, the only thing serious about the Green New Deal and the Democrats’ rush to embrace it is how dangerous it really is for the nation. The 2020 election will present a stark contrast between the country’s two futures. Voters will have a choice between the job-killing socialism offered by Ocasio-Cortez, and President Trump’s free-market approach that has helped make America into the greatest country on Earth.

Mandy Gunasekara is the founder of the Energy 45 Fund.  She previously served as a senior official in President Trump’s EPA and was the chief architect of the strategy to withdraw from the Paris Climate Accord.