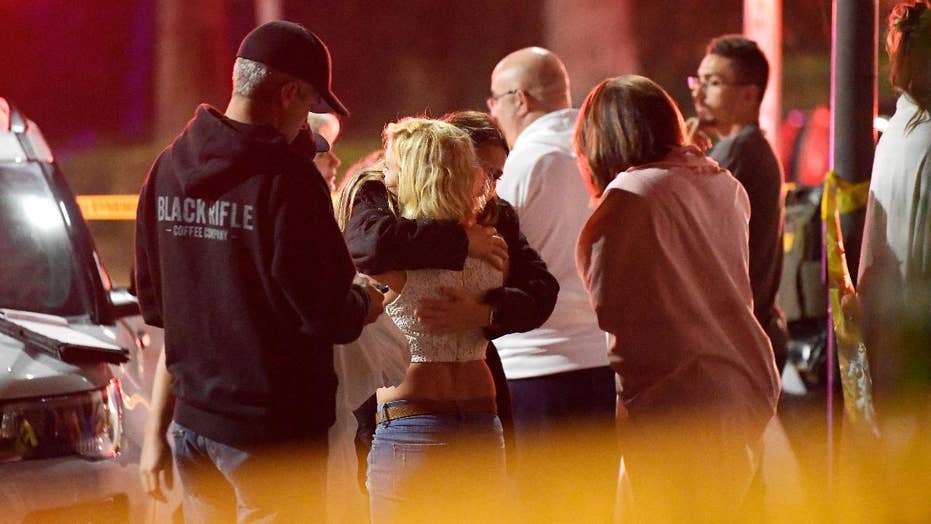 Sheriff's Sgt. Ron Helus, a 29-year veteran, was hit with bullets after entering the bar when he heard more gunshots.

The notes may have kept bravely playing after Vegas, but this week in Thousand Oaks, it felt like the music died.

They were all line dancing, linked and toe-tapping, when bullets ripped through the refrain and young girls’ unsuspecting backs.

Telemachus Orfanos survived last year’s Las Vegas’ spray of gunfire. He drove back to home and his mother – only to be gunned down in his hometown bar and grill, senseless violence strangling out the song mid-chorus. Tel did not make it home to his waiting mother last night. A former U. S. Marine, not yet 28 years old, he’d signed up to defend his neighborr, his nation – and he was cut down in his own neighborhood.

The world spins a bit stunned today, listening to the fading notes, wondering how our children, our neighbors, “they all got up to dance – oh, but they never got the chance.”

When the bullets started – they said they had to dive for cover.

Love makes itself into the cover and absorbs the fury and the fire to protect the vulnerable.

Real love makes your actual life into a shelter to take a rain of searing pain – to be protection for others.

When Sgt. Ron Helus heard the shooting, he told his wife on the other end of the phone how much he loved her, but he had to go – and he ran toward the crisis, ran into the gunfire.

“He went in to save lives, to save other people,” is what was said when officials announced that Helus’ life had been cut short by the rage of bullets. “First person there – and confronted [the shooter] to try to save others hiding inside.”

Helus is a modern day Good Samaritan to his neighbors:

Whoever would protect only his best interests will lose out on the best life – but whoever prioritizes the good of vulnerable neighbors – will find the far better life.

Helus did. We could. When Helus’ body was transported from the hospital to the funeral home, hundred of mourners lined the streets in an hour-long processsion and a whole nation felt the gravity of it: Heroes don’t want to land on covers – they make their whole life a cover for the vulnerable.

Sean Adler, 48, a bouncer at the Borderline Bar & Grill, was remembered this week by a childhood friend, who choked back the emotion as he spoke: “Sean was my protector. He stood up for me, and he showed me the kind of kindnesses I didn’t get from other people. I needed that so badly at that time.”

It’s always the protectors of the vulnerable who are the vendors of hope.

And that is exactly what we need that so badly at this time.

Our interests have to be invested in the interests of our vulnerable neighbor and not be solely individualistic – or our society becomes dangerously narcissistic.

“… Hell [is] a state where everyone is perpetually concerned about his own dignity and advancement,” writes theologian C.S. Lewis.

Days like these, with the music fading, leave us asking: Is it a kind of hell on earth wherever we each care only about our own interests on earth?

And does a bit of heaven come down wherever just one person stands up for the interests of vulnerable and marginalized neighbors?

And it’s our neighbourhoods that direly need more heroes like Adler and Helus, who lived it:

Love risks itself into a roof – not to protects self-interests, but to stand up for the interests of the vulnerable.
Love makes its tables long – so more people know that they belong.
Love tears down its gates – and lays out more plates.
Love uses its privilege – to shield others from pain.
Love reaches out to the neighbors most different – to be part of writing a different, better story.

This is not the time to think these are passing words – this is a pressing imperative. This is the time for the heroes to rise up and  literally do one thing in the neighborhood that we wish we could do in the Thousand Oaks neighborhood. This is a call to action – a call to our own  honoring Sgt. Ron Helus who ran toward the crisis – and make no mistake this is a time of crisis.

We may be neighbors who do not agree about elections or politicians or immigration or gun control but love is a roof that invites in those who think differently to our table, to break bread, to break down stereotypes, to listen to different perspectives, to pass around the bowls, and pass down kindness and respect and grace.

And it begins right in our neighborhoods, right under our own roofs:

When we sit at each other’s tables, we listen and begin to understand each other – and find common ground to stand for each other.

Sean Adler and Sgt. Ron Helus gave us all the sheet music of hope for change for our neighborhoods, for our times:

Only when you’re making your interests about the interests of the other, are you rightly investing your life.

They said it was one of Sgt. Helus’ most repeated refrains: “Live your life so that the fear of death never enters your heart.”

Because Helus knew it, right to his last brave breath: It’s our fears that needs to be evicted, it’s the mentality of us against them that needs to move out, it’s the idea that it’s just all of us out for our own interests that desperately needs to be kicked out of the neighborhood.

It could be the refrain under all of our roofs: Live your life so that your love of the different and the vulnerable and the marginalized neighbor getting the best chance to live their one beautiful life beats the very loudest in your heart.

And then maybe the music could rise again, raise a bit of the roof – and we could serve pie to the neighbors and dance all again, out in our welcoming streets.

This article was originally published on Ann Voskamp's blog, annvoskamp.com.

Ann Voskamp's the wife of one fine, down-to-earth farmer; a book-reading mama to a posse of seven; and the author of the New York Times bestsellers "The Greatest Gift" and "Unwrapping the Greatest Gift," and the sixty-week New York Times bestseller "One Thousand Gifts: A Dare to Live Fully Right Where You Are.” Her latest book is "The Broken Way: A Daring Path into the Abundant Life." Follow her on Instagram @AnnVoskamp.