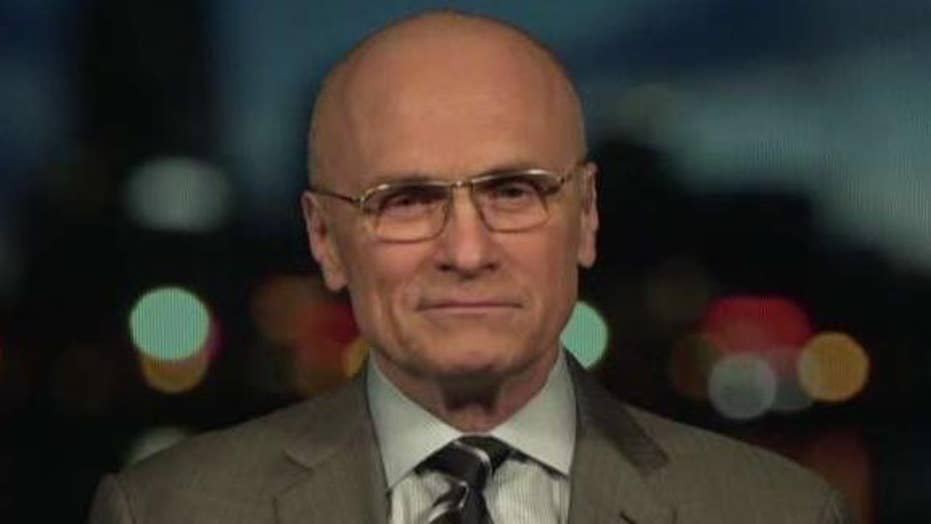 Puzder: Progressive socialists want the government to control everything

Senate to bring Green New Deal to a vote; author Andy Puzder on what he thinks of the deal.

PROGRAMMING ALERT: Watch author Andy Puzder discuss socialism vs. capitalism and his personal story on "The Story with Martha MacCallum" on Wednesday, February 13 at 7 pm ET.

When I was growing up, my dad, a World War II combat vet, was a Ford car salesman. His dad, my grandfather, left his home and family as a teenager in 1912 and came to our shores in search of opportunity – as immigrants have done throughout our nation’s history.

We were a working-class family living outside of Cleveland, Ohio. But as a kid, I didn’t think about our economic status. Ours was the only life I knew. Until one day, I got a look at a very different life.

When I was about 10 years old, in roughly 1960, I went with my dad to deliver a car to one of his customers named George Humphrey in a very affluent suburb near where we lived. Back then, even rich guys drove Fords.

ANDY PUZDER: TRUMP'S ECONOMY HAS TAKEN US FROM STAGNATION TO BOOM -- THAT'S A STORY THAT NEEDS TO BE TOLD

We drove up to a huge gate – at least it was huge in my 10-year-old mind. It was probably the first house I’d ever seen with a gate. We pulled in and I saw an impressive white house, far bigger than our house. But my dad kept driving. Surprised, I asked him why we didn’t stop. He looked down and said with a smile: “Son, that’s the guest house.”

We then passed the stables. There was fox hunting and a polo field in the area. In fact, it was called Hunting Valley. Mr. Humphrey’s horses seemed to have a larger residence than we did.

When we finally pulled up to the main house, it was bigger than any home I’d ever seen. We got out and my dad knocked on the door. Mr. Humphrey answered and he and my father – who I later learned got along well – had a friendly discussion. Finally, he thanked us and gave us the keys to the car he was trading in.

I was in awe, stunned really, by the affluence around me. As we got in the other car to drive home, I asked my dad what Mr. Humphrey did that he could afford to live like this. “Well,” my dad said, “he’s a lawyer, and he owns a business.”

To this day, I can still remember thinking, “A lawyer, I could be a lawyer.” It’s important that I thought that. I had unknowingly been touched by the possibilities available to me because I lived in a capitalist country.

But what’s really important is what I didn’t think – “This SOB stole from us,” or “It’s unfair that he has so much when we have so little,” or “He must be in the 1 percent and we’re not.” What I thought was, “I could do this.”

And thank God I lived in a country where I really could do it, where there was a path to success. It was a difficult path. I worked my way through college and law school doing just about any job I could find, no matter how tough or dirty – painting houses, cutting lawns, busting up concrete with a jackhammer in the St. Louis summer heat.

But because of the opportunities available in our capitalist economy, I eventually became the CEO of an international corporation which, by the time I retired, generated over $4 billion in revenue with nearly 4,000 restaurants in 45 states and 40 foreign countries.

I actually became a lawyer who ran a company.

Today I tell this story to my grandchildren. They seem surprised that Grandpa once worked as a laborer, and that our family once had a different standard of living than the one we enjoy today.

I tell them that there’s never been another country in the history of the world where a working-class kid like me could have aspired to that level of success with any realistic chance of achieving it. They should understand that, had our family lived in almost any other country, my story – and theirs – would have been very different. Had I been born in a socialist country – the Soviet Union of old, or Venezuela today – the notion of lifting myself up from the working class either never would have occurred to me, or never would have seemed achievable.

The American Dream exists because of capitalism. Because our nation’s founders chose capitalism, and because, like millions of other immigrants pining for freedom and happiness, my grandfather had the courage to come to this country, I was able to live the American Dream. Otherwise, today, I’d probably be a bald farmer sitting on the front porch of someone else’s farm in Slovakia.

It’s an important lesson. I’m hopeful that it will cause my grandkids to at least question what they learn in an education system dominated by progressive socialists, and a media complex that feeds them leftist ideology as entertainment.

As President Ronald Reagan once said, “Freedom is always one generation away from extinction.” Capitalism and the American Dream are my grandchildren’s generation’s heritage, and will soon be theirs to preserve for future generations. Our nation’s greatness lies in its respect for personal liberty and economic freedom. That’s something of which they should never be ashamed.