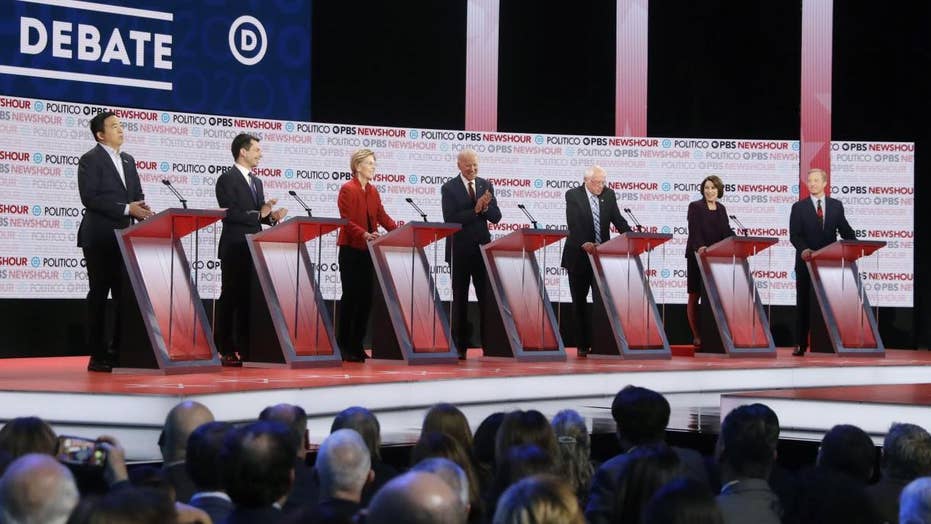 Fox News contributor Robert Wolf discusses the 2020 Democratic candidates following the latest debate on PBS, the impeachment of President Trump and the Democrats running against a strong Trump economy.

The American people have a lot to celebrate this holiday season, thanks to the booming Trump economy – and polls prove they know it, despite the false claims of Democratic presidential candidates that only the rich are benefitting from President Trump’s policies.

According to Fidelity Investments’ 2020 New Year Financial Resolutions Study released earlier this month, 82 percent of Americans say they’re in a similar or better financial position this year than last. And 78 percent believe they will be even better off next year.

A new CNN poll conducted by SSRS found that 76 percent of Americans rate current economic conditions as positive – the highest percentage since February 2001.

ALFREDO ORTIZ: THE TAX-CUT BOOM — TRUMP AND GOP WERE RIGHT, DEMOCRATS AND MEDIA FLAT OUT WRONG

Since August, the percentages of Americans with this positive view have increased significantly. Some 97 percent of Republicans, 75 percent of independents and even 62 percent of Democrats now view our economic conditions positively. Those are incredibly high numbers.

As for the next year, 68 percent of Americans expect our economy to be in good shape a year from now – the best showing in CNN’s polling since December 2003.

In addition, a December poll from Quinnipiac University found that registered voters are feeling more positive about the economy than at any time since 2001, with 73 percent describing our economy as excellent or good. That includes a new high of 26 percent who say it is excellent.

Looking forward, Quinnipiac found that “an overwhelming majority” – 79 percent – of Americans said “they are optimistic about their own financial future.”

Given these numbers, ordinary Americans watching the Democratic presidential candidates’ debate Thursday must have found it a surreal experience. It was as if the Democratic would-be presidents were looking at our economy through a badly distorted funhouse mirror.

Debate moderator Judy Woodruff of PBS asked the candidates about voters who may not like everything President Trump does but “really like this economy” and “don't know why they should make a change.”

The candidates rejected the premise.

Frontrunner and former Vice President Joe Biden responded that he doesn’t “think they really do like the economy” and said “the middle class is getting crushed. And the working class has no way up as a consequence of that.”

Sen. Elizabeth Warren of Massachusetts argued that “America's middle class is being hollowed out” and that working-class families and poor people are being left behind because “we've got a government that works great for those with money and doesn't work for much of anyone else.”

Sen. Bernie Sanders of Vermont – the only Democratic presidential candidate honest enough to admit he’s a socialist – claimed that “we have a president who has sold out the working families of this country.” He added that we have “more income and wealth inequality than since the 1920s. We need an economy that works for working families, not just the 1 percent.”

What about the recent and consistent polling strongly indicating that these bleak readings of our current economy are way out of touch with the sentiments of American voters?

Democrats won’t let facts get in the way of their rhetoric, seeming to be locked in a time warp.

While much of what the Democrats say may have been true over much of the post-recession decade, things are undoubtedly much better today thanks to President Trump.

Our unemployment rate sits at an impressive 50-year low, while labor participation is actually increasing.

The stock market is regularly setting new all-time highs for everyone with a retirement account or any investments in stocks – not just millionaires and billionaires.

There are simply too few conventionally employable individuals left to hire in the Trump economy – so the universe of employees that employers are willing to hire is expanding.

With monthly job openings consistently exceeding the number of people actively looking for work by over 1 million, those trends look to continue for some time.

As a result, the Census Bureau reported in September that the poverty rate declined in 2018 and “for the first time in 11 years” was “significantly lower than 2007, the year before the most recent recession.”

Biden attempted to make a point about poverty during the Democratic debate, stating that “most Americans, if they received a bill for $400 or more, they’d have to sell something or borrow the money.” That’s simply untrue.

According to the Federal Reserve Bank’s Report on the Economic Well-Being of U.S. Households in 2018, rather than “most Americans,” 39 percent would sell something, borrow or be unable to meet a $400 expense.

That percentage is certainly higher than we would like, but has dropped from 44 percent in 2016 – the last year of the Obama-Biden administration. That’s over a 10 percent decline in just two years.

The income gap between the high earners and low earners is also declining. The Census Bureau found that income inequality decreased in 2018, following the much-maligned Republican tax cuts. And by one measure, it declined “statistically significantly.”

No one should be surprised if income inequality declines in 2019. Notably, the Census Bureau will announce those numbers in September – shortly before the November election.

Insisting that Americans are dissatisfied with the current economy – when voters keep telling pollsters the opposite – seems like a bad strategy for Democrats, particularly when the data supports the voters.

Come 2020, Americans may well wonder why they should elect someone to fix an economy that – for the first time in at least a decade – simply isn’t broken.

Thanks to President Trump, voters are making more money, keeping more because they are paying less in taxes, and optimistic about their futures. Democrats won’t admit that, but it’s the truth – and the American people know it.

Andy Puzder was chief executive officer of CKE Restaurants for more than 16 years, following a career as an attorney. He was nominated by President Trump to serve as U.S. labor secretary. In 2011, Puzder co-authored "Job Creation: How It Really Works and Why Government Doesn't Understand It." His latest book is "The Capitalist Comeback: The Trump Boom and the Left's Plot to Stop It" (Center Street, April 24, 2018).
ADVERTISEMENT