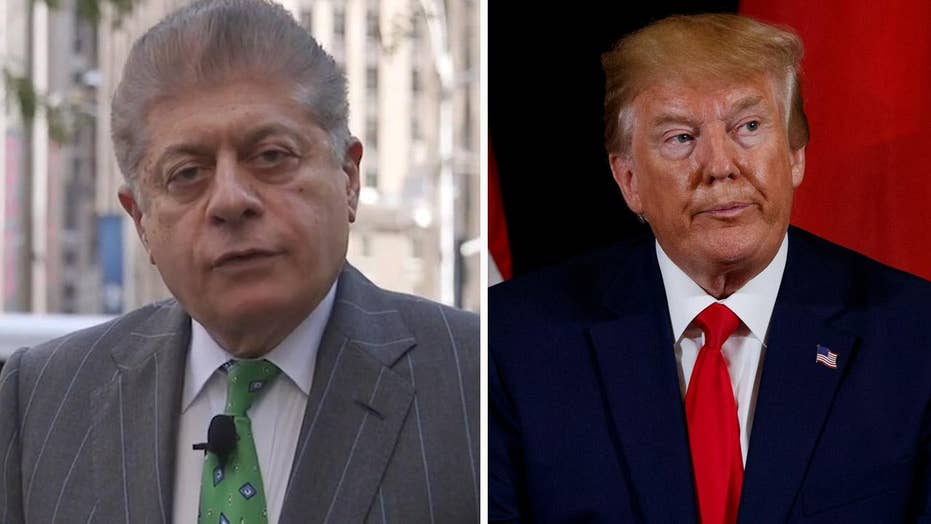 Judge Napolitano's Chambers: Judge Andrew Napolitano explains how President Trump asking a foreign government or any foreign national to get dirt on a political rival is an impeachable offense.

Back home in the Bronx is where I first heard the old saw about the Irishman who, coming upon a donnybrook at the local pub, asks a bystander: “Is this a private fight or can anybody join?”

I was a much younger fellow then. The prospect becomes less alluring with age, so I have some trepidation stepping in between two old friends, Andrew Napolitano and Joe DiGenova. Through intermediary hosts, the pair — Napolitano a former New Jersey Superior Court jurist and law professor, DiGenova a former United States Attorney for the District of Columbia and prominent defense lawyer — brawled last week on Fox News (where I, like they, contribute regularly).

I’m going to steer clear of the pugnacious to-ing and fro-ing. Let’s consider the intriguing legal issue that ignited it.

Judge Napolitano argues that the July 25 conversation between President Trump and Ukrainian President Volodymyr Zelensky contains the makings of a campaign-finance crime. He highlights Trump’s request for Ukraine’s help in investigating then–vice president Joe Biden. In 2016, Biden pressured Kyiv to drop a corruption investigation of Burisma, a natural gas company that paid Biden’s son, Hunter, big bucks to sit on its board.

Biden, of course, is one of the favorites for the Democratic presidential nomination. Napolitano reasons that the information Trump sought from Ukraine would be a form of “opposition research” that could be seen as an in-kind donation to Trump’s reelection campaign, which should be deemed illegal because the law prohibits foreign contributions and attempts to acquire them. (Napolitano also raised the “arguable” possibility of a bribery offense, on the theory that Trump was withholding defense aid as a corrupt quid pro quo to get the Biden information. But he emphasized the foreign contribution issue. That is his stronger argument, and I am focusing on it, given that the Trump-Zelensky transcript does not support a quid pro quo demand; plus bribery, in any event, raises the same “thing of value” proof problems addressed below.)

DiGenova strongly disagrees. Though there wasn’t much time to elaborate, he is clearly relying on the lack of past campaign-law prosecutions on similar facts. DiGenova is also voicing the prudent conservative hostility to campaign-finance laws: Any expansion of criminal liability would necessarily restrict political speech, the core of First Amendment liberty.