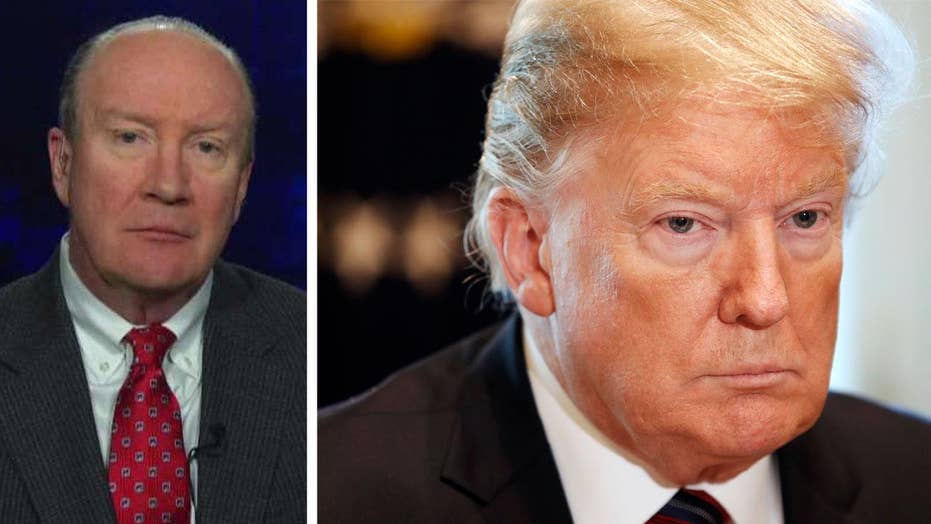 McCarthy on the Russia investigation: I really think that the investigation was about Trump from the beginning

On Friday night, the New York Times published what was clearly intended to be a blockbuster report that, following the firing of FBI director James Comey on May 9, 2017, the bureau formally opened an investigation of President Trump. But in truth, the only thing the story shows is that the FBI, after over a year of investigation, simply went overt about something that had been true from the first. The investigation commenced during the 2016 campaign by the Obama administration – the Justice Department and the FBI – was always about Donald Trump.

We have to remember: The FBI believed the Steele dossier – the collection of faux intelligence reports compiled by former British spy Christopher Steele, who was ultimately working for the Hillary Clinton campaign. The Justice Department on four occasions brought surveillance applications to the Foreign Intelligence Surveillance Court (FISC), in which the FBI swore that it believed the dossier allegations.

Ostensibly, the surveillance application targeted Carter Page. But Page was just a side issue. The dossier was principally about Trump – not Page, not Paul Manafort, Michael Cohen, or other Trump associates referred to by Steele. The dossier’s main allegation was that Trump was in an espionage conspiracy with Russia to swing the election to Trump, after which Trump would do Putin’s bidding from the White House. The FBI and the Obama Justice Department could not verify the dossier, but they undeniably believed it.

CLICK HERE TO READ MORE ABOUT THE RUSSIA INVESTIGATION

If you believe the dossier, then of course Trump is the main focus of the probe.

The FBI and DOJ knew this would be controversial – the incumbent administration spying on the opposition campaign in the absence of corroborated evidence of a crime. So, they designed the investigation in a way that allowed them to focus on Trump without saying they were doing so. Before Trump was elected, they papered the files to indicate that they were focusing on the Trump campaign or people connected to it, like Page and Papadopoulos. This way, they could try to collect evidence about Trump without formally documenting that Trump was the target.

After Trump was elected, the FBI realized that Trump was soon going to have access to government intelligence files. If they honestly told the president-elect that they had been investigating his campaign in hope of making a case on him, they had to be concerned that he would shut the investigation down and clean house at the FBI and DOJ. So, they misleadingly told him the investigation was about Russia and a few stray people in his campaign, but they assured him he personally was not under investigation.

Because the FBI did not have solid evidence of a crime, they did it under counterintelligence authority rather than criminal authority – calculating that the cover of probing Russia’s interference in the 2016 election would enable them to keep investigating while they tried to tighten up the obstruction case or find some other criminal offense.

This was not true. The investigation was always hoping to find something on Trump. That is why, for example, when director Comey briefed then-President-elect Trump about the Steele dossier, he told Trump only about the salacious allegation involving prostitutes in a Moscow hotel; he did not tell the president-elect either that the main thrust of the dossier was Trump’s purported espionage conspiracy with the Kremlin, nor that the FBI had gone to the FISC to get surveillance warrants based on the dossier. The FBI was telling the president-elect that the allegations were salacious and unverified, yet at that very moment they were presenting them to a federal court as information the judges could rely on to authorize spying.

Later, though Comey repeatedly told President Trump he was not a suspect, he gave House testimony patently geared to lead the public and the media to believe Trump was a suspect – which is exactly how the media reported it. In so doing, the FBI (and the Obama holdovers in the Justice Department who authorized Comey’s testimony) violated DOJ rules about publicly confirming the existence of an investigation, and publicly identifying a subject of an investigation: the Trump campaign, which Comey publicly announced was suspected of “coordinating” in the Kremlin’s widely reported cyberespionage interference in the 2016 campaign.

Comey’s firing on May 9, 2017, was not the start of an investigation of Trump. It was the point when the FBI and Justice Department rashly determined that they finally had a crime to pin on Trump — obstruction. In their haste and overconfidence, they rationalized that (a) Comey’s firing must have been intended to impede the Russia investigation, and that they could couple this with; (b) the claim that Trump may have impeded the Flynn investigation – based on a memo Comey leaked to the New York Times a few days after his firing.

Legally, none of this was obstruction. Yet, the FBI and Justice Department settled on this novel and flawed legal theory: Even though the president has constitutional authority to fire subordinates and weigh in on investigations, he may somehow still be prosecuted for obstruction if a prosecutor concludes that his motive was improper. Of course, even though he could have, Trump never actually took any steps to interfere in the investigations of Russia (which is still continuing) or Flynn (who later was indicted and pled guilty). Yet the FBI, hot-headed over the director’s dismissal, concluded that this obstruction theory was a sound enough basis to go overt with the case on Trump they had actually been trying to make for many months.

Remember, it is not just that the FBI formally opened an investigative file on Trump. There was talk between Deputy Attorney General Rod Rosenstein and acting FBI director Andrew McCabe of wiring up against the president — i.e., conducting covert surveillance to try to record Trump making damaging statements. There was also talk of invoking the 25th Amendment – of claiming Trump was too incapacitated to perform his duties. And finally, on May 17, Rosenstein appointed Robert Mueller as special counsel to pursue the Trump-Russia investigation.

But all of these steps were just a matter of finally being overt about something that had been true for over a year: The FBI was conducting a probe to try to make a criminal case on Trump. Because they did not have solid evidence of a crime, they did it under counterintelligence authority rather than criminal authority – calculating that the cover of probing Russia’s interference in the 2016 election would enable them to keep investigating while they tried to tighten up the obstruction case or find some other criminal offense.

Make no mistake, though: The investigation was always about Donald Trump, from Day One.