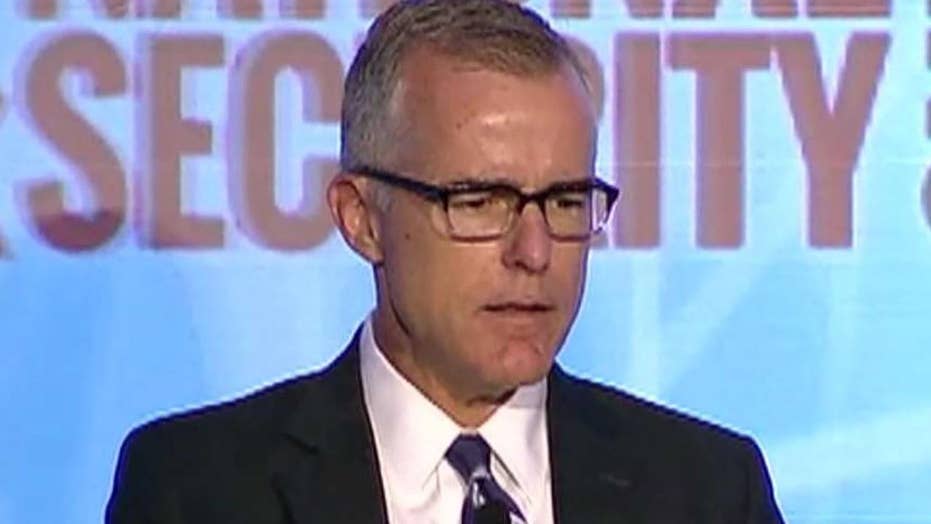 The Associated Press is reporting that former deputy director of the FBI Andrew McCabe maintained personal memos regarding the president.

McCabe’s firing was legally and morally appropriate and was necessary.

Sessions said in a statement: "Pursuant to Department Order 1202, and based on the report of the Inspector General, the findings of the FBI Office of Professional Responsibility, and the recommendation of the Department’s senior career official, I have terminated the employment of Andrew McCabe effective immediately."

McCabe understandably feels aggrieved – if he had not been fired he would have qualified for full lifetime pension benefits Sunday. Perhaps he is even sorry for his missteps.

Politics aside, here is why that decision was right, why McCabe will not win his full pension back on appeal, and why his indignant, self-serving and political reaction is dead wrong.

McCabe is an attorney who joined the FBI in 1996. At that time, he took an oath to “support and defend the Constitution of the United States,” vowed to “bear true faith and allegiance to the same,” and to  “well and faithfully discharge the duties of the office,” ending “so help me God.”

When he rose to deputy director of the FBI, under then-Director James Comey, McCabe took the oath again. He briefly served as acting director of the bureau after Comey was fired and before Chris Wray became director.

McCabe became deputy director of the FBI in February 2016. He seemed destined for greatness, and perhaps inclined toward the Clintons. An Obama appointee, he had promising political ties and nowhere to go but up.

She raised $1.6 million for her race – twice her opponent’s war chest – including $780,000 that came from political sources, some closely tied to the Clintons.

Then came the series of integrity missteps by Andrew McCabe, which would likely have gone undiscovered, or perhaps simply covered up, had Hillary Clinton been elected president in 2016.

First, McCabe did not recuse himself from the investigation of Hillary Clinton’s email server.

Call that bad judgement, but he may have wanted to guard the process, protecting the likely future president, who might have rewarded him once in the Oval Office.

The obvious conflict of interest, and blatant perception of one, was simply ignored, with McCabe claiming he did not oversee public corruption cases in Virginia nor undertake his role in the investigating the Clinton emails until his wife’s campaign was finished.

Then, with McCabe handling the Clinton investigation, a pall of silence fell during the critical 2016 election year over the whole process.

One can, to a degree and with a straight face, claim that standard and ongoing investigations deserve silence. But the Clinton email investigation was not standard, and the internal process that intimately involving McCabe and Comey was also not standard.

Then-Attorney General Loretta Lynch privately and shockingly talked with the investigation target’s husband, former President Clinton, and then told Comey not to publicly call this investigation an investigation, but only a “matter.”  McCabe played along.

Then in in September 2016 a bombshell was discovered. On the computer of top Clinton aide Human Abedin’s husband – disgraced former U.S. Rep. Anthony Weiner, under investigation for other illegal activity – investigators found hundreds of thousands of emails tied to Hillary Clinton. The emails were voluminous and damning.

What did McCabe do?  He did not tell tell his boss, James Comey. This was a hot a potato coming two months before the presidential election, and McCabe dropped it.

In what might make a good opening paragraph for Hillary Clinton’s next book, “What Happened, Version II,” McCabe made a fatal mistake, assuming his goal was to protect Hillary Clinton.

Getting the critical information on the Clinton emails in September 2016, McCabe did not reveal it to FBI Director Comey until Oct. 27, forcing Comey on national television to raise questions about Clinton’s integrity days before the general election.

Ironies are seldom so clean, and violations of duty seldom so clear. In an apparent effort to shield a previous and potentially future political patron, McCabe badly bobbled the ball, actually adding to her peril. But that is not the main point.

The main point is – as the inspector general congressional investigators and others have noted – McCabe shaded the truth repeatedly.

McCabe told congressional investigators that the FBI had sought a warrant from the Foreign Intelligence Surveillance Act (FISA) Court to spy on a Trump campaign adviser, using information they knew was paid for by the Clinton campaign, but never told the FISA Court the information’s origins.

McCabe even reportedly noted that, without that Clinton opposition research, the warrant would not have been granted by the FISA Court.

Add this to emails indicating he was party to some “insurance” gambit, presumably starting the “Russia collusion” probe, which might be used as a foil if Trump won, which he did.

While all sounding wildly nefarious, the whole business really reeks of adolescent giddiness and amateur political machinations, in a place there should be no politics. It reeks of terrible judgement, at the top of the FBI. That may be the real reason Comey was removed earlier, and why McCabe had to go now.

Likely the final straw, was – as the inspector general detailed and Attorney General Sessions confirmed – that McCabe, who had otherwise risen through a distinguished career, doubled back to protect himself. The cover-up always does it.

Reportedly, McCabe lied to the inspector general, or in euphemistic and delicately modern parlance, he “had made an unauthorized disclosure to the news media and lacked candor – including under oath – on multiple occasions.”

Although it need not be said, Attorney General Sessions wryly noted:  “The FBI expects every employee to adhere to the highest standards of honesty, integrity, and accountability.” The Office of Professional Responsibility noted: “All FBI employees know that lacking candor under oath results in dismissal and that integrity is our brand.”

There the story of McCabe ends. What is happening, plain and simple, is that justice – and respect for the non-political oath taken by all men and women at the FBI, Justice Department and in federal service – is being restored. And that is the truth.