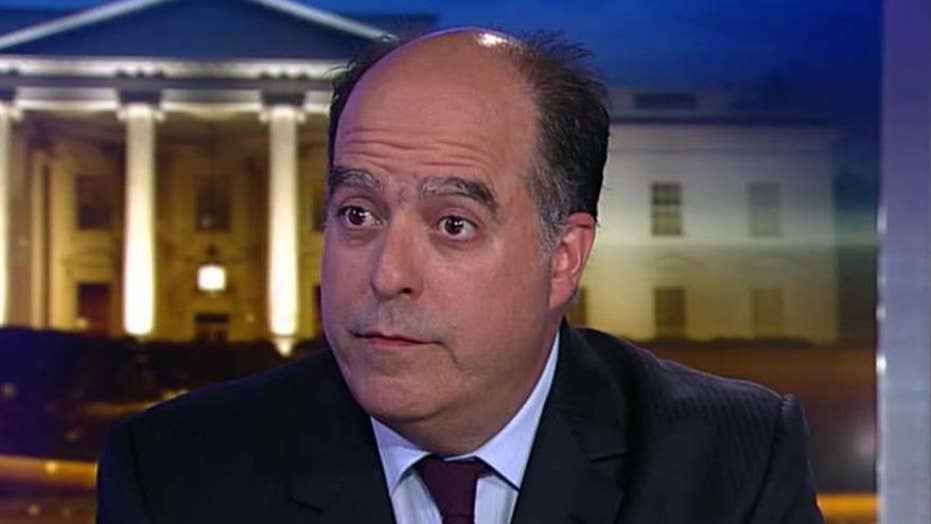 Opposition leader on the catastrophe unfolding in Venezuela

According to the left, the Trump administration cares nothing about human rights.

It’s all the doing of former Venezuelan President Hugo Chávez, his successor Nicolás Maduro, and their fellow kleptocrats.

Though America didn’t cause Venezuela’s problems, the Trump administration is trying to be part of the solution. Its primary motive: to ease the intolerable suffering caused by the socialist regime and its destabilizing effects on the entire region.

WATCH: VENEZUELA IS A STRONG WARNING TO SOCIALISTS

Nearly three-quarters of a century ago, Winston Churchill described socialism as “the equal sharing of misery.” Venezuela under Maduro shows that description holds true today.

How miserable is it? Since Maduro came to power, more than 3 million Venezuelans have fled the country. Most remain in Latin America, but nearly 400,000 have come to the U.S.

With the exception of a corrupt and privileged elite, almost everyone remaining in Venezuela is now destitute. The government stopped reporting poverty statistics in 2015, but by some outside estimates, 90 percent of the oil-rich country now lives in poverty.

In theory, under socialism, the community as a whole owns or regulates all the means of the production and exchange. The idea is that this will assure that the working class controls the economy and gets its “fair share” of its benefits—the goods and services they produce.

The problem is that socialist theory provides no checks and balances in socialism to keep the ideology from devolving into what Churchill called “the creed of ignorance and the gospel of envy.” In practice, “power to the people” in places like Venezuela quickly starts channeling into more and more power in the hands of government.

Maduro’s regime has now monopolized political and economic control and sucked the country dry. Having impoverished the nation, Maduro retains his grip on power by intertwining the government with organized crime—it doesn’t help the people, but it keeps the cash coming to him and his cronies in Caracas.

The Obama administration largely watched from the sidelines as the Venezuelan regime ran the country into the ground. It stood silent as then-Vice President Tareck Zaidan El Aissami, an alleged drug-trafficking kingpin, worked hand in glove with Los Zetas and other regional drug cartels. It was not until Trump came into office that the Treasury Department imposed sanctions on El Aissami.

El Aissami, who still serves as Maduro’s Minister of Industries and National Production, is no outlier. The regime is shot through with corruption.  The Trump administration has imposed sanctions on more than 60 Venezuelan government officials for human rights violations and other offenses undermining the country’s democratic order.

He’s also hitting the bankrupt regime where it hurts the most: U.S. investors from purchasing Venezuelan debt that keeps Maduro afloat.

Nor is the White House working alone. It has gotten allies and partners such as the EU, Canada, Panama and Colombia to issue their own sanctions against corrupt Venezuelan officials. And it has convinced the Lima Group (a bloc of democratic countries in Latin America) and the Organization of American States to take unprecedented actions against the regime.

In getting deservedly tough with Maduro and his henchmen, Trump was wise not to push for oil sanctions. Hitting the energy sector would hurt the Venezuelan people far more than their socialist masters—a tactic not calculated to lead to a new government more friendly to the U.S.

Moreover, oil is the not the Achilles heel of the regime. Maduro and his gang profit mostly off of their criminal enterprises, not state revenues.

The best way forward for the Trump administration, then, is to do more of what it’s been doing. For example, it can engage Spain, Colombia and Panama—havens for the regime’s ill-gotten games—and ask them to issue stronger targeted sanctions.

Trump’s Venezuela policy has been a model of human rights concern matched with proportional, appropriate, practical pressure. Yet, as is the case with many of his foreign policy initiatives, Trump gets no credit for doing what’s right.

America’s “progressive” class is so busy talking up the supposed virtues of socialism, it has no time to acknowledge responsible efforts to address socialism’s terrible wrongs.