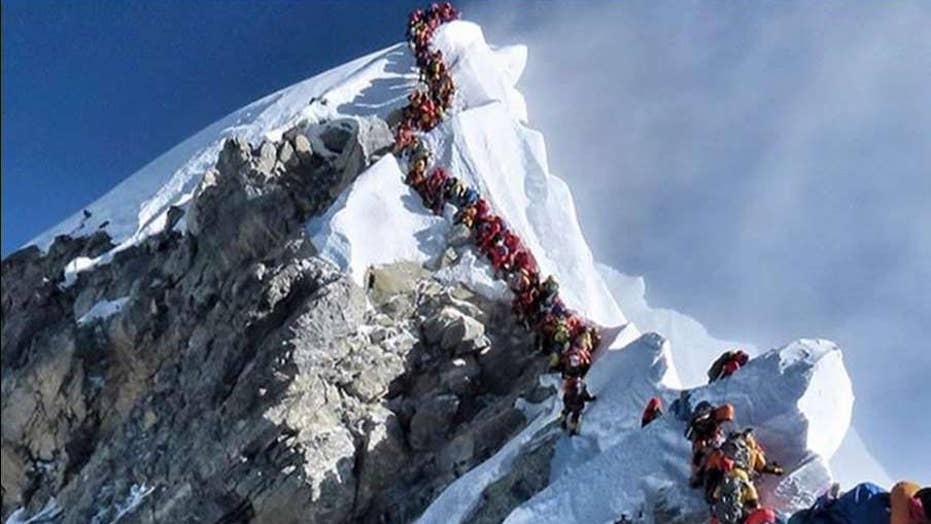 If you read recent headlines, anyone who climbs Mount Everest barely makes it up, leaves trash and is a rich, selfish narcissist who comes home to brag about how easy it was and how they did it better than anyone else. Well, a couple of these points are true but it paints a misleading image of what’s really happening on the world’s highest mountain.

This spring 11 people lost their lives while climbing Everest. Their families are grieving instead of joining the celebrations of the 700 other climbers who summited safely.

I was born and raised in Memphis, Tennessee, elevation 338-feet above sea level. I camped out as an Eagle and Boy Scout and fell in love with mountains on a family vacation to Colorado. As an adult, I moved to Colorado and later to Switzerland for my job and climbed some of the most famous peaks in the Alps. But I never dreamed that I would summit Everest, much less her tougher little sister, K2.

I attempted Everest three times before accomplishing my goal on the fourth try at age 54 in 2011. Sitting on the summit, covered in goose down-filled clothes and staring at my heavy yellow boots, I quietly pulled the hood over my head and let my tears freely run down my frozen face.

Yes, as a climber, I was humbled and grateful but my emotions were driven more from my mom, Ida’s death a few years earlier from Alzheimer’s Disease. You see, often climbing mountains is not about the climb but the reason behind the climb.

I was sucker-punched this year when I saw the picture taken by Nirmal Purja Magar of the long line of climbers at the Hillary Step. They were almost to the summit on the more popular Nepal side of the mountain. The evidence in this image showed what is so wrong on Everest these days. It told me that in addition to the explainable reason that the weather limited the acceptable days from the usual dozen to only a few, but it also told me that there were too many people on Everest that had not earned the privilege, they had simply bought a ticket, to attempt to climb the highest mountain on our planet.

Many people who have seen the image, use it as Exhibit A in the trial that Everest, and perhaps mountaineering as a sport, is broken. The media coverage of the 11 deaths on Everest dwarfed the coverage of the deaths of some of the best climbers in the world earlier this year.

Tom Ballard was the son of Alison Hargreaves who was the first woman to summit Everest without supplemental oxygen. He and his partner Daniel Nardi both died in February on the 8,000-meter peak Nanga Pabart. Then in April, elite climbers, American Jess Roskelley and Austrians David Lama and Hansjörg Auer were killed in an avalanche on Canada’s Howse Peak attempting a very difficult new route. The coverage lasted a day, this year’s Everest coverage is still in full bloom.

I get it. The elite climbers understand the bargain with the mountain. They attempt the almost impossible, reap the rewards through sponsors and more, climbing while the 11 who died on Everest were just regular people following a dream, no matter how unprepared.

Ten years ago, you had to spend $45,000 or even $65,000 to get on an Everest team. Today, you can buy your way on to a team for well under $30,000. Natural market dynamics have created competition. But not all guides are the same, just like flying is not the same on all airlines … but the personal risks are drastically different.

There are no significant requirements to join an Everest team. Just pay your $11,000 permit fee to the Nepal government, find a team and get to Kathmandu in early April. Many guides only ask about the money, not the experience. They tell their customers that they will teach them everything they need to know. No experience needed. The best guides vet their clients and don’t accept anyone who lacks basic and proven mountaineering experience. There is a difference.

I was once told by a low-cost operator that I didn’t need to train for Annapurna, the world’s most-deadly 8,000-meter mountain. Just come over.

On May 23rd, each person standing in line just below Everest’s summit was using up their limited supply of life-giving bottled oxygen. They must have looked at the person ahead and behind and wondered. But where was the leadership? The famed “Sherpa Guides” -- as the Nepal Tourism department anointed everyone with the last name of Sherpa -- who worked on Everest. This was to address the negative publicity that there were not enough guides. It was similar to saying everyone on an airplane was a pilot. Nepal excels in tourism public relations.

The Sherpas and Western Guides who were there saved multiple lives. They saw the long lines. They knew someone had to take control. The most experienced guides directed traffic. The strongest Sherpas, literally dragged the fallen down the mountain. Many Sherpas gave up their own personal supply of oxygen to their clients, again saving lives. The best Sherpas showed why many of them are the best Everest climbers. And many of the weakest customers proved that they should have been turned back hours earlier by their mountain guardians.

What lessons have been learned from this year? Sadly, the same ones offered in 1996, 2006 and 2012: inexperience kills, not all guides are the same, money buys access, the weather has the last word. And Nepal is in continuous denial about the problems, blinded by the tens of millions brought in each spring, deaths be damned.

Mountaineering is a very personal sport. The answer to the oft-asked question of “Why?” is unique and personal to each person.

To participate is to accept the bargain. Each climber accepts the risks and the rewards. And the world struggles to understand.

Alan Arnette is a climber and writes a blog on mountaineering. He was cited as, "One of the world’s most respected chroniclers of Everest" by Outside Magazine. He summited Everest in 2011 and became the oldest American to summit K2 at age 58 in 2014. He founded Summit Coach, a consulting service that helps aspiring climbers around the world achieve their dreams.