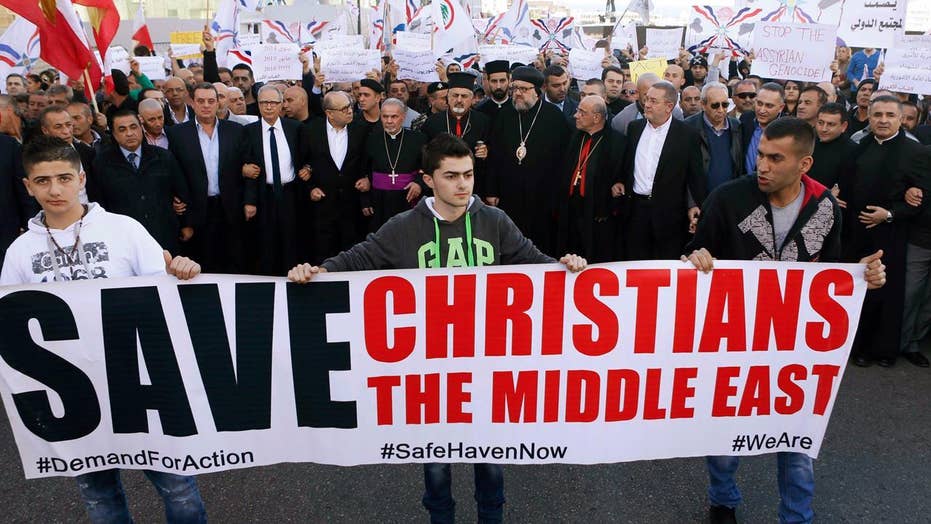 Spirited Debate: Rep. Chris Smith (R-NJ) on why it is crucial for the Senate to vote on the 'Iraq and Syria Genocide Emergency Relief and Accountability Act.'

At this time of year American Christians are free to celebrate Christmas in any way they like, because freedom of religion is a cherished right in the U.S. for people of every faith. But in many predominantly Muslim nations in the Middle East, the Christian minority is threatened and persecuted 365 days a year.

As an Assyrian Christian who fled my native Iran in 1989 I know about this harassment and persecution from first-hand experience.

And as the founder and president of the Iraqi Christian Relief Council I know about this persecution because of the work my nonprofit does to assist persecuted Christians throughout the Middle East and in other nations where they have taken refuge.

The Iraqi Christian Relief Council has been operating since 2007 and last year alone we helped 110,000 displaced Christians. We offer food and medicine, job training, home rebuilding and other services. With more support, we could help many more Christians.

Vice President Mike Pence is scheduled to visit the Middle East in January. His visit would be a good time to speak up about the persecution that his fellow Christians endure and to press nations to do more to protect the Christian minority in the region where the faith first took root some 2,000 years ago.

Such a move by the vice president would be in keeping with America’s role as a beacon of religious liberty and other human rights for people around the world.

In the worst cases, religious hatred has claimed the lives of innocent Christians in the Middle East who want nothing more than to live and pray in peace. For example in April bombings at two Coptic churches in Egypt killed 49 Christians. Another 28 were killed in a bus attack in May. Earlier, in December 2016, a church bombing by ISIS took the lives of 25 Christians in Egypt.

In war-torn Iraq, the persecution of Christians who are indigenous to the land is even worse.

When President George W. Bush mounted his invasion of Iraq he named the deployment “Operation Iraqi Freedom.” Millions of Iraqis took those words seriously. So did my own community, the Assyrian Christians. We trusted those brave American soldiers to protect our basic rights, including freedom of religion.

But the last two consecutive American presidents made protecting religious freedom in the Middle East a low priority. Iraqi Christians (Assyrians, Syriacs and Chaldeans) paid a bitter price. We pray that the Trump administration will do more.

The collapse of Iraq’s central government when Iraqi dictator Saddam Hussein was overthrown left minorities vulnerable. Some 1.3 million Iraqi Christians – 75 percent of the prewar Christian population – were driven into exile or killed. Most are now still displaced, many in makeshift refugee camps.

ISIS and other Islamic militants cited religious justifications to murder Christian men and boys, and to enslave, rape, and sex traffic Christian women and girls. Is it any wonder that so many Christians fled?

In my work with the Iraqi Christian Relief Council, I have witnessed what sustained religious persecution does to people. It devastates even survivors. Men cannot find work or defend their families against violence. So they slip into depression.

I met one physician in his late 50s, living in Jordan as a refugee. In tears, he asked me: “Where will I ever be a doctor again? I am not young. I do not speak foreign languages. All of my studies have gone to waste. You know what that does to a man?”

Women who evaded or returned from ISIS captivity now live in shipping containers. They cannot return to their homes, can’t cook family meals, work alongside their husbands, hold jobs, or offer their children hope.

The young people can’t go to school. Iraqi Christians were once part of a highly educated middle class in Iraq. Now they can hope, at best, for menial jobs in foreign countries, which might well deport them at any time.

Imagine if all that happened to your family because of your religion. With thousands of Americans killed or wounded in Iraq, and hundreds of billions of dollars spent, does America want to leave religious persecution of Christians as its legacy?

But humanitarian efforts are just triage. Religious minorities in Iraq deserve a long-term solution that guarantees their rights as citizens. They need local autonomy and a military shield that will protect them the next time sectarian chaos erupts – as sadly seems likely. ISIS may be defeated for now, but the cruel intolerance it preached remains in the hearts of millions.

The 2005 Iraqi constitution states that Christians, referred to in the constitution as the ChaldoAssyrians, have the right to local self-governance and also recognized their Syriac language as an official language in Iraq. In 2014, the Iraqi Council of Ministers in principle accepted the Nineveh Plain (home to many Christians) should be established as an official province.

Therefore, we have high hopes that Iraqi Prime Minister Haider al-Ebadi’s government will take the proper steps – with the encouragement from President Trump’s administration – to give Iraqi Christians and rights and protections they are entitled to.

These indigenous children of Iraq have the right to self-defense in the form of an armed force, the Nineveh Plain Protection Unit. This group needs to be made up of at least 5,000 soldiers, with modern weapons, which the Trump administration could provide.

There’s a bill before Congress that offers real, concrete aid to persecuted Christians called the Iraq and Syria Genocide Emergency Relief and Accountability Act. The measure, passed by the House in June, would provide U.S. funding to faith-based and other groups carrying out humanitarian relief and reconstruction work among the Christian minorities in both Iraq and Syria. Unfortunately, the Senate has not acted on measure. The bill deserves bipartisan support.

It is in America’s interest to protect religious minorities, rebuild the middle class and decentralize power in Iraq. Christians and other vulnerable communities are natural U.S. allies – if only America could see it. Free, strong religious minorities can fight ISIS and other radical Islamist terrorists groups in the Middle East, before such groups start targeting Americans at home.

As American Christians prepare for Christmas, please remember your Christian brothers and sisters in the Middle East who do not have the freedom of religion you enjoy. We ask for your help and the help of the U.S. government to be true to our faith and live in peace and safety in the region where Christianity was born and first spread.

Juliana Taimoorazy is the president and founder of the Iraqi Christian Relief Council (ICRC), and senior fellow for the Philos Project. The ICRC is a nonprofit organization in the United States raising awareness about the persecuted church in Iraq.