Those of us old enough to remember Sept. 11, 2001, will never forget it. We watched the horrific nightmare unfold in real time right before our eyes and stop our country in its tracks. Every detail of that day is forever etched in our memories.

An entire nation was brought to its knees in grief, but also – for however briefly – we were all united in love for one another and in a steadfast resolve.

Two decades later that date is now solidified in our kids’ history books as one of our generation’s darkest days in spite of the beautiful clear blue sky we woke up to that morning in New York and Washington, D.C.

REP. BLAKE MOORE: ON 9/11 THESE ARE THE PEOPLE I WILL REMEMBER

Unlike so many others, my story is not about losing someone close to me that day, though my heart grieves for those who did.

Mine is a story of gratitude. Gratitude for people who made the ultimate sacrifice when they diverted a plane away from its intended target, the U.S. Capitol, where I was working that day.

Because of the actions of the 40 passengers and crew aboard United Flight 93, the attack on the Capitol was thwarted.

My story is also one of hope.

Since then, I, and so many others like me, have been able to marry, have children and achieve goals that were just dreams 20 years ago.

Every one of those milestones represents hope in the midst of a deeply fallen world.

It’s hope in all the things we’ve had the privilege to experience over the last two decades, including the look of hope on our children’s faces as they imagine a future full of possibilities.

That’s the gift the heroes of Flight 93 gave so many of us. And we feel that hope with tremendous gratitude for the sacrifices they made that September day.

Call it an accident, coincidence or divine appointment – I believe in that sort of thing – but something occurred this summer that brought it all home to me.

After dropping our daughter off at camp in Western Pennsylvania, my husband and I were making our way back to D.C. when my otherwise reliable British navigator via Apple Maps – who I affectionately refer to as "Nigel" – went awry and attempted to lead us down a closed road.

Call it an accident, coincidence or divine appointment – I believe in that sort of thing – but something occurred this summer that brought it all home to me.

When we "recalculated," (without Nigel’s help) we found ourselves approaching the road to the Flight 93 Memorial – a place I have always said I would visit, but never did.

My husband instantly turned and went through the entrance to the memorial, without waiting for me to agree or protest. What followed was hard to put into words.

Surreal and peaceful to be sure, but still no words seemed quite adequate to describe the weight of that afternoon. We had the 150-acre memorial almost entirely to ourselves. Maybe a half dozen other people were there, heightening the somber reality of all the memorial symbolized.

As we walked the flight path alone it was not lost on me that the bright blue sky above was the same crystal clear blue that loomed above Flight 93 as it made its way down this same flight path 20 years ago.

Walking through the fields at the memorial, the stillness echoed uncanny similarities of the desolate ghost town D.C. became hours after everyone evacuated, when cars were off the highways and planes were out of the skies.

I’m not sure if the Capitol Police knew much more than we did that morning 20 years ago, but the urgency of one officer screaming at me to get out of the building was enough for me to send my coffee flying on the first-floor Capitol stairs.

Out on the lawn, nobody seemed to know when it was safe to leave or where we should even go. 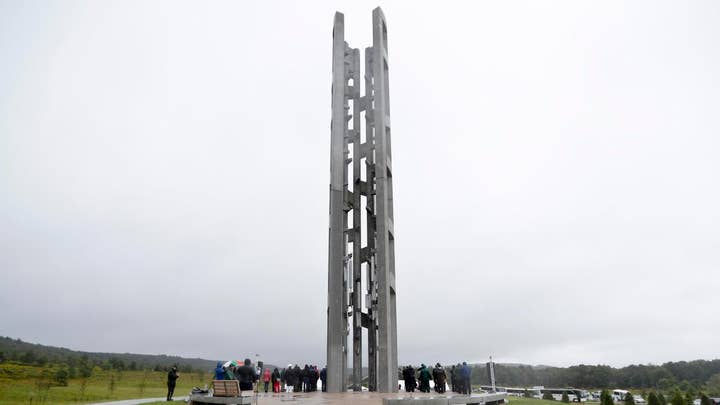 While chaos had momentarily taken over inside, outside everyone seemed to come together and keep each other calm.

Later, one police officer would tell me he was waiting for a plane to hit the building.

I was separated from my co-workers. A woman next to me on the lawn was in town on business and didn’t know anyone. I guess you could say it was another divine appointment. I’ll be honest, though. At that moment I really had no interest in talking to strangers. But I think God knew we needed each other.

I can’t remember the name of my friend, but I think of her every September.

She contacted me once, and I’ll always regret that I never responded. I guess a part of me just didn’t want to relive that day.

Then, she was visiting from Washington state and didn’t have a car.

I dropped her off at her hotel, which unfortunately was right next to Dulles Airport. From there, American Airlines Flight 77 had departed just hours earlier, before it was hijacked and flown into the Pentagon.

To say I had zero interest in being anywhere near Dulles at that moment is an understatement. But we truly were united that day.

Being at Washington’s largest airport so close to the nation’s capital, the skies empty of planes and highways almost free of cars, was nothing short of surreal.

I had the same feeling this summer standing in that sprawling Pennsylvania field, nearly all alone, staring down at the 17.5 ton sandstone boulder that marks where Flight 93 went down.

I felt it again looking with deep gratitude at the Wall of Names, which lists each passenger and crew member individually, on 40 separate marble stones, including on one a woman’s name next to "and unborn child."

Life is fragile. None of us is promised tomorrow.

On Sept. 11, 20 years after the terror attacks, I will hug my husband and kids a little harder with deep gratitude for the life I’ve been given and for the hope and future my kids are blessed with because of those 40 brave men and women.

It’s with a grateful and hopeful heart that I will never forget.