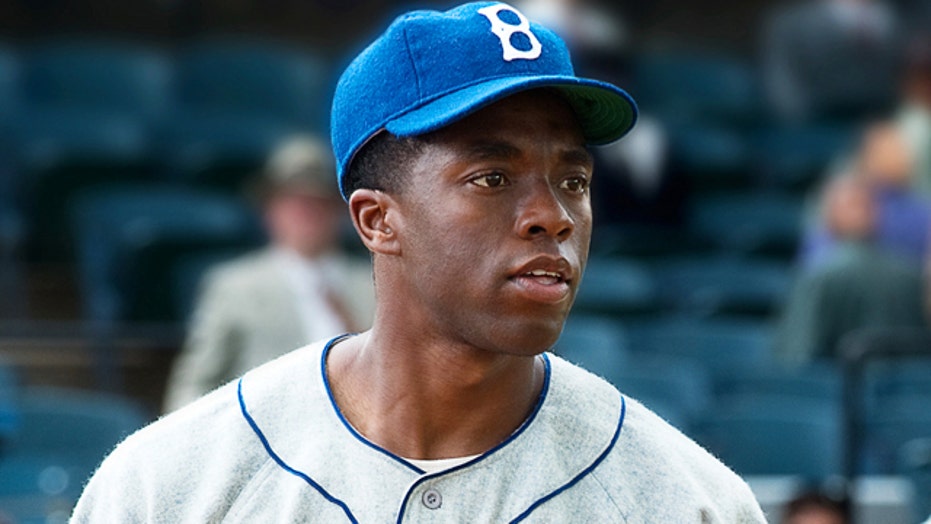 The United States has always been a great country, but the new movie “42” shows how it became an even greater country, a more perfect union.  Jackie Robinson, the first black player in the modern era of major league baseball, wore #42 when he made his debut for the Brooklyn Dodgers on April 15, 1947--and so entered into the American pantheon.

Robinson was not only a gifted ballplayer--although joining the majors at age 28, he earned a lifetime batting average of .311 and stole 197 bases during his ten-year career--he was also a remarkably motivated and self-disciplined man.

That is, in breaking the “color line” of baseball, he was willing and able to brave his way through the storm of insults--and beanball pitches--that were hurled at him.  He understood that if he yelled back, or hit back, the resulting fracas would derail his effort to integrate the national pastime. And so if “42” plays up the heroism angle, it’s justified, because he was an American hero.

Yet as “42” reminds us, Robinson was not alone.  So let’s look at some of the lead characters in the film, each of whom played a significant role in this noble experiment:

Jackie Robinson, played by Chadwick Boseman.  We see Robinson from 1945 to 1947, as he moves from the Negro Leagues to the Dodgers farm system to to Dodgers themselves.   Along the way, he is mentored by Branch Rickey, the Dodgers’ general manager.

When Rickey tells Robinson that he will have to turn the other cheek at racist vitriol from players and fans alike, Robinson exclaims: “You want a player who doesn't have the guts to fight back?”  And Rickey responds, “No. I want a player who’s got the guts not to fight back.”  Robinson considers the situation for a moment, and then answers, “You give me a uniform, you give me a number on my back, I’ll give you the guts.”

This history has been recounted many times before.  Robinson himself appeared in a 1950 movie, “The Jackie Robinson Story,” a film that still holds up today. And yet “42” brings a new vividness to the story, including its loving recreation of the look of the 1940s, from the clothes to the cars, and especially the baseball uniforms.

During that 1947 season, despite vicious heckling--depicted in one particularly harrowing scene in which the main heckler is the manager of an opposing team--Robinson hit .297, as well as led the National League in stolen bases, with 29.  He was named Rookie of the Year.

Branch Rickey, played by Harrison Ford.  Rickey was a true strategist--not only for baseball, but also for America.  He helped pioneer the use of batting helmets, batting cages, and pitching machines, and he also institutionalized the farm-team system.  As he said, “Luck is the residue of design.” That is, design a good system, and good luck has a way of falling into your lap.

Similarly, Rickey planned out the integration of baseball.  He had been thinking about it for years, but he waited for the right black player to be the spearhead.

Rickey figured that bringing black players would be good for the Dodgers’ competitive advantage, but he also believed in equality of opportunity.  As he says in the film, “There was something unfair at the heart of the game I loved.” And so we might note: Historical greatness, too, is the residue of design.

We might also observe that Rickey was inspired by faith.  Rickey’s full given name was Wesley Branch Rickey--as in John Wesley, the Methodist evangelist.  In explaining why he chose Robinson, Rickey says, half-humorously, “Robinson is a Methodist, I’m a Methodist. God is a Methodist.”  God might not have a denomination, but He was obviously blessing Rickey’s effort.

Leo Durocher, played by Christopher Meloni. Watching Durocher, one is reminded of Durocher’s dynamic, even manic, energy; he was a major figure in the game, as a player, coach, and manager, for more than 40 years.  In a standout scene, Durocher persuades his players to get with the Robinson program: “I don’t care if the guy is yellow or black, or if he has stripes like a zebra”--he is playing as a Dodger, and that’s that.  “What's more,” Durocher adds with a wink, “I say he can make us all rich.”  That is, he will help us win.   And that’s what happened: the  Dodgers won the NL Pennant in ’47.

Pee Wee Reese,  played by Lucas Black. Born in Kentucky, Reese admits to nostalgic Confederate sympathies, and is frightened enough by the anti-Robinson reaction that he shows Rickey a death threat he has just received--whereupon Rickey shows him a file-folder full of death threats that he has received.

In the end, called by his own conscience, Reese makes a point of putting a friendly arm on Robinson’s shoulder, on-field, in full display, at the beginning of an game in Cincinnati--a city just across the river from Kentucky--ignoring the boos from the fans.

Baseball, played by the Brooklyn Dodgers and other teams. Before Robinson, black athletes such as boxer Jack Johnson and runner Jesse Owen had risen to the top, but they played solo sports.  In “42,” we see a black man working well with white men.

To be sure, we see the filmmaker’s obvious love of baseball, including an appreciation of the skill and spirit that a batter needs to face up to a pitcher at the plate, knowing that the next pitch could be aimed at his head.  Players also need to run the bases, realizing that every slide is a high-speed human collision.  And on the diamond, every fielder must be ready to charge straight into a barrier as they run to catch a fly ball.  So yes, the excellence of the individual player is  always on full display in baseball--and that excellence is color-blind.

Yet at the same time, in “42” we also see an exaltation of team spirit and team play.  Within the team, stars shine.  Still, to win, even the brightest star needs the team; at its best, baseball is all for one, and one for all.  And that was the story of the pennant-winning Dodgers in 1947, and for many years thereafter.  During the Robinson era, the Dodgers won five more pennants, and finally, in 1955, they also won a World Series.

America, played by the 150 million Americans.  The film, set in the optimistic afterglow of WW 2, captures a powerful sentiment of the era: If the US was to be a force for good in the world, it had to lead by example on the home front.

Just a few years before, in 1941, President Franklin D. Roosevelt had established the Fair Employment Practices Commission, declaring, “There shall be no discrimination in the employment of workers in defense industries or government because of race, creed, color, or national origin.”

That’s how we won the war--as a united country.  And so a few years later, it made sense for Rickey to say,  “We won over fascism in Germany.  It’s time we won over racism at home.”

Rickey was right.  And that was how Jackie Robinson, supported by many millions of Americans, wrote a new and glorious chapter in the long chronicle of how these United States became that more perfect union.