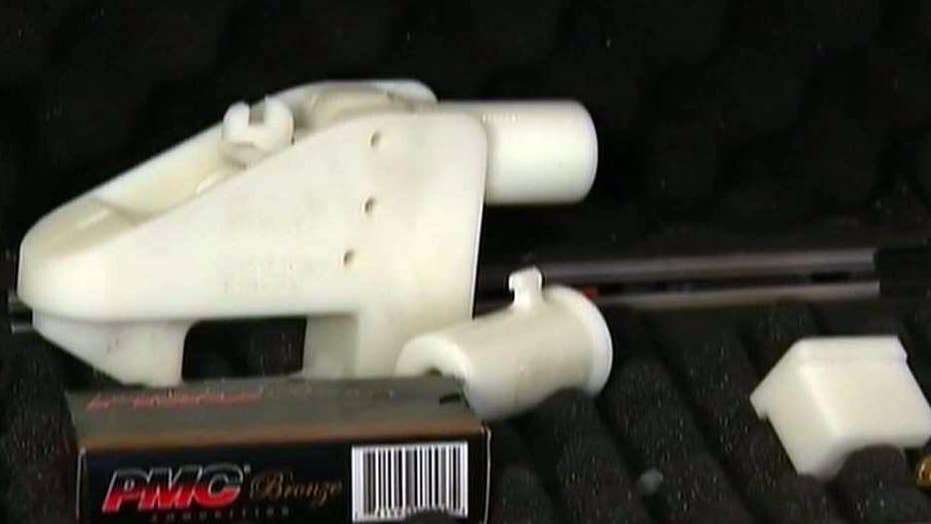 8 states file suit against the Trump administration over its decision to allow Defense Distributed to publish downloadable blueprints for guns; Anita Vogel reports on the case.

Just hours before most Americans were expected to be able to legally access blueprints for 3D-printed guns, a federal judge in Seattle issued a temporary restraining order Tuesday stopping release of the blueprints until a hearing Aug. 10.

U.S. District Judge Robert Lasnik issued the order in response to a lawsuit filed by eight states against the federal government to block a settlement allowing blueprints for 3D-printed guns to be downloaded from the Internet.

Downloading the blueprints would allow people to circumvent background checks and open the door to do-it-yourself firearms that could bypass point-of-sale controls that have traditionally been used to limit access to firearms and other dangerous devices.

Democrats urged the Trump administration Tuesday to block the settlement allowing blueprints for the 3D-printed guns to be downloaded from the Internet.

“Donald Trump will be totally responsible for every downloadable, plastic AR-15 that will be roaming the streets of our country if he does not act today,” said Sen. Edward Markey, D-Mass.

In addition, attorneys general in 21 states urged Secretary of State Mike Pompeo and Attorney General Jeff Sessions to withdraw from the settlement.

In many parts of the U.S., weapons are already cheap and easily attainable. But 3D printing would likely make it easier for terrorists, homegrown dissidents and lone-wolf attackers to print weapons in locations where they are currently prohibited such as schools, government buildings and airports.

While this is not yet likely, the technology is improving quickly and even the most secure sites could be vulnerable to insider threats if a would-be attacker only needs access to a 3D printer and the Internet, according to our recent paper for the nonprofit RAND Corporation that analyzes the threats posed by 3D printing.

Until Judge Lasnik issued his temporary restraining order Tuesday, the blueprints were scheduled to be made available Wednesday as the result of a June settlement between Cody Wilson – creator of the first 3D-printed guns and an online archive of digital blueprints – and the State Department.

In 2013 the federal government made Wilson take down the digital blueprints for violating federal export laws, leading Wilson to sue. The settlement temporarily blocked by Lasnik says Wilson and Defense Distributed – the nonprofit he leads – can publish plans, files and 3D drawings in any form and exempts them from the export restrictions.

Even if the Internet-enabled gun movement can be blocked on a long-term basis, it is only one of the many potential ways 3D printing could introduce new security threats.

Hackers may have new and lethal ways to threaten our personal and economic security through infiltration or sabotage as digital files become physical products. And 3D printing could undermine export controls or sanctions if Iran can print parts for its Boeing airliners instead of relying on the U.S. and other Western powers to provide them.

We explored the potential security threats of 3D technology, formally known as “additive manufacturing,” by interviewing executives affiliated with private-sector 3D printing and holding a workshop with industry participants and leading security experts.

We found that regulation is unlikely to be effective and may be costly to society, potentially constraining the growth of 3D technology. But cooperation from business leaders, government officials and other policymakers could make a big difference by providing standards and a valuable foundation for technical and policy-level solutions.

Although 3D printing is in place across various industries, its use tends to be fairly limited, focusing on prototypes and small-scale production. But as the technology becomes more capable and accessible over the next few years, costs should fall.

Once the digital design is completed, fabricating an ornate and complicated shape does not require much more time, skill or cost than printing a simple 3D block. This gives 3D printing an advantage over traditional manufacturing for producing complex or highly customizable goods.

In the 3D printing industry that’s known as getting “complexity for free.” Through digital design and layered construction, 3D printing allows for the creation of objects that cannot be built using traditional methods.

For example, the environmental control system duct in an F-18 fighter was traditionally built from 16 different components, each of which had to be adjusted to account for assembly and construction. With 3D printing, the entire duct is created as an optimized whole piece.

Advances in 3D printing could also unleash new forms of cyberattacks. As digital plans are transformed into physical objects, cybersecurity will become even more important.

Today’s hackers steal credit card, Social Security and bank account numbers. Tomorrow’s may infiltrate a printer and corrupt software or alter a digital design, introducing imperceptible design flaws. Such a cyberattack could compromise airplanes and cars as well as simple household appliances and delivery drones – and have profound implications on personal and home security.

3D printing also has the potential to make trade sanctions – historically a major tool in dealing with international disputes – less effective. For instance, because of sanctions imposed over the last two decades by the West, Iran Air had to rely on salvaged or smuggled parts. It has become one of the most dangerous airlines in the world, causing some passengers to dub the airline’s rusty aircraft “flying coffins.”

With access to printers, raw materials and digital designs, a state like Iran could print its own airline parts and more easily circumvent sanctions.

The growing opposition to 3D-printed guns shows that potential security threats do not have to be inevitable. The security challenges inherent in 3D printing could be addressed, while the development of industry norms can still be shaped.

Policymakers will likely need to balance safety and security, while avoiding overregulation that might smother a technology that could improve billions of lives and greatly contribute to a new era of innovation.

Trevor Johnston is an associate political scientist at the RAND Corporation.

J. Luke Irwin is an assistant policy analyst at RAND and a Ph.D. student at the Pardee RAND Graduate School.

Troy D. Smith is an associate economist at the nonpriofit, nonpartisan RAND Corporation.