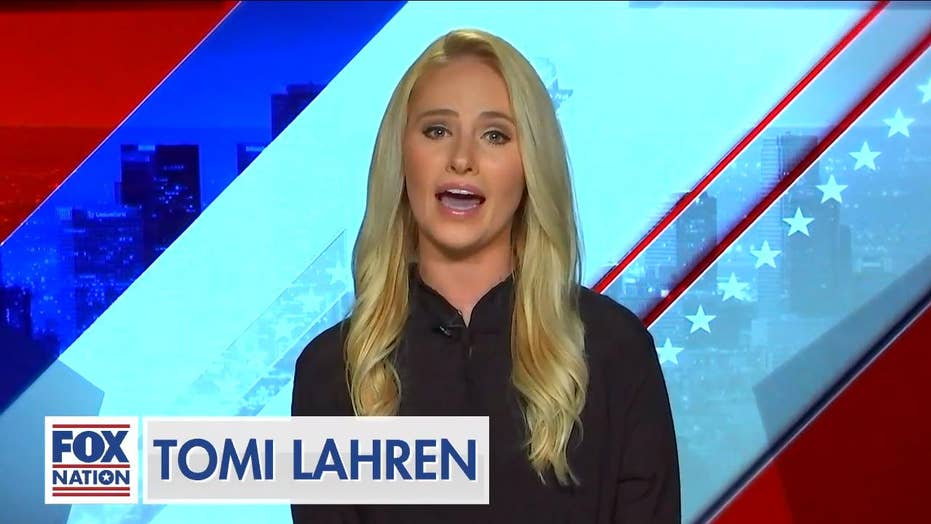 'You've got to be freaking' kidding me': Tomi Lahren responds to postponed charity event due to Trump supporting attendees

The California police chief who pulled out of a fundraiser because Republican guests would be speaking is a "disgrace," according to Fox Nation host Tomi Lahren.

The charity flag football event in honor of a slain California sergeant was postponed indefinitely after organizers say that the local police chief and Democratic officials derailed the event to prevent Republican guest speakers from attending.

"A charity event in honor of a slain California... sergeant is derailed because a police chief and local Democrat politician can’t stand the thought of being at an event with Republicans. You’ve got to be freaking kidding me," Lahren said in her daily commentary, "Final Thoughts."

The Blue Bowl charity flag football tournament, originally scheduled for this Sunday in Thousand Oaks, California, was organized to honor fallen officer Sgt. Ron Helus and other officers who have fallen in the line of duty, FOX 11 of Los Angeles reported.

Helus was killed last Nov. 7 in a mass shooting, when a 28-year-old suspect allegedly attacked the Borderline Bar and Grill in Thousand Oaks, killing a total of 13 people and wounding about a dozen others.

According to the event organizers, thousands of dollars had already been raised for fallen officers' families, but the money is now being returned to donors after Thousand Oaks Police Chief Tim Hagel reportedly withdrew the police department's support when he found out Trump supporters would be speaking at the event.

"He basically said over and over in the conversation, 'This is not Trump country, that slogan 'Make America Great' is not favorable, popular, within 1,200 square miles,' that we don’t want Republicans here. I could not believe it,” event organizer Mike Randall, vice president of the Fallen Officers Foundation, said, according to FOX 11.

Both Democrats and Republicans were invited to the event, with speakers including Democratic Gov. Gavin Newsom's public safety liaison, Trump supporter Scott Baio, who attended Helus’ church, and Trump-supporting singer Joy Villa, who was scheduled to sing the national anthem at the event.

"What an absolute disgrace," commented Lahren. "I guess Chief Hagel didn’t mind that Governor Gavin Newsom’s public safety liaison would be there, I guess that was totally acceptable -- but the thought of sharing air with real-live Trump supporters was just too much to handle," she said.

According to reports, Hagel was also pressured by Democratic Assemblywoman Jacqui Irwin who took issue with the event when she found out that her former opponent, local attorney Ronda Kennedy, was invited to speak to speak as well.

Event organizers said Hagel pressured them to get rid of the Republican speakers, or he would instruct the Ventura County Sheriff’s Department and local politicians to withdraw. After Randall refused, they ultimately pulled out.

"[Hagel] goes, 'Yeah, this ain’t gonna work for us,' I said, 'You’re not gonna support this with the honor guard?' And he goes, 'No, we’re not bringing the honor guard. We’re not coming. We’re not going to be there, not supporting it'," said event organizer Randall.

The Ventura County Sheriff’s Department issued a statement, saying: "As the event began to materialize, we became concerned with the behavior of some of the organizers of the event. Although I believe the organizers had good intentions, the event was moving in a direction we no longer felt comfortable supporting.”

Lahren called out the chief and slammed the leftists for their inability to put their politics aside to raise money for the fallen.

"Excuse me," she said, "the direction the event was going? By that you most certainly mean, the loving and tolerant leftists at the helm aren’t adult enough, patriotic enough, or decent enough to stand alongside people with whom they politically disagree even if it means raising money for families of the fallen."

"What a joke," she continued. "Folks, we rarely if ever see this kind of partisan political BS from the Right."

"This is not OK. This is prejudice, hello?" she said. "You’re shutting down an event because of the way conservatives think because I support the president? This is disgusting, I’m appalled, and in all my years being an out conservative, I’ve never seen something so despicable like this.”

Event organizer Randall had strong words of his own.

Lahren reiterated his point and called on the chief to explain his position.

"When was the last time you heard of a Republican or Trump supporter refusing to be near a Democrat? That’s right, rarely, if ever," she said.

"You know there are a few things in this country that should NEVER be partisan: love of country, love, and respect for those who sacrifice to serve, and memorializing and commemorating the lives of those we’ve lost in that service and sacrifice," Lahren concluded.

"Chief Hagel, you’ve been exposed," she said,  "and you’ve got some explaining to do, pal."