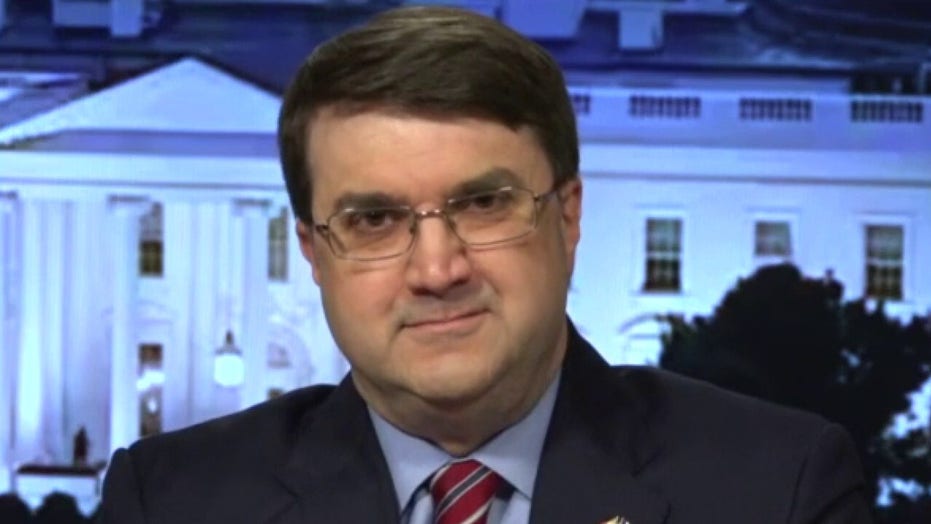 Appearing on "Fox News @ Night" with host Shannon Bream, Wilkie said that while it's clear this pandemic is ravaging the country and there will surely be a national conversation about how to care for America's most vulnerable after the crisis has passed, Democratic senators attacking the VA in response to the disaster at the Holyoke Soldiers' Home do not seem to understand the department's lack of control surrounding "anything that goes on in those state veterans' homes."

Officials and health care workers at the Holyoke Soldiers' Home are now racing to curb the spread of COVID-19 after at least 71 people have now died there in what has become the deadliest outbreak at a long-term care facility in the United States.

Flags and wreaths honor veterans on the grounds of the Soldiers' Home in Holyoke, Mass., on April 28, 2020. A number of people died at the home due to the coronavirus. While the death toll at the state-run Holyoke Soldiers' Home continues to climb, federal officials are investigating whether residents were denied proper medical care while the state's top prosecutor is deciding whether to bring legal action. (AP Photo/Rodrique Ngowi)

While roughly 100 veterans still remain there, dozens of residents have been moved away, including about 30 to a nursing unit at Holyoke Medical Center. In addition to the dead, about 80 other veterans and 80 employees have contracted the virus.

Wilkie admitted to Bream that while the VA is not running care facilities, they do have some oversight of making sure that they're safe.

"We share many of those responsibilities with HHS and also with the State Department of Veterans Affairs. But, it is very clear in the statute and in the regulations -- and we have made that clear to those members of Congress -- that the law prohibits us from taking direct control over those nursing homes," he stated. "We take complaints when we hear complaints. We have to hand those back over to the state health departments in order for them to act because, statutorily, we cannot impose our will on those state venues."

"I think [that] Congress needs to be clear. I think, in this case, there are several senators who are looking for scapegoats. And, right now, we have to take care of people first," Wilkie said.

Wilkie said the Democratic senators in question -- including former 2020 presidential candidate Sen. Elizabeth Warren -- had referred to a U.S. Government Accountability Office (GAO) report that was well over a year old in a new letter to the GAO calling for the probe. In the 2019 report, the GAO had found lax VA inspection protocols for state veterans' homes. The lawmakers also cited transparency issues found in the report.

"And, we even had to make clear to the GAO that, under the regulations and under the statutes, we do not have day-to-day control over those nursing homes," he told Bream.

"However, we feel it is part of our national duty to support those homes, to support our veterans, and to support civilians and provide help in saving lives across the country -- which we are doing in the form of hundreds and hundreds of nurses that we've dispatched to help in these...very tragic situations," Wilkie concluded.