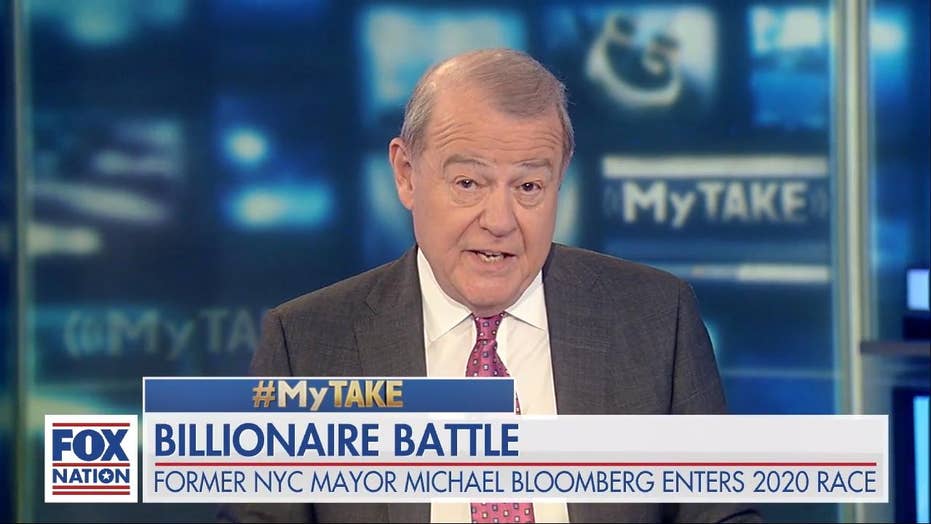 Varney: Bloomberg took a ‘buzz saw to the Democratic party and split it down the middle’

"Kind of ironic, isn't it? The party that hates billionaires has been taken over by a multibillionaire," Fox Business host Stuart Varney said in the latest episode of Fox Nation's "My Take."

"He hasn't quite taken over yet, but a man with a fortune of more than $50 billion, and who has just spent more on political ads than any other candidate ... he's going to have a big impact," Varney predicted. " I don't know whether a 77-year-old anti-gun New Yorker can win the Democratic nomination or the presidential election, but he has taken a buzz saw to the party and split it down the middle."

There has been speculation for months that Bloomberg, who donated millions of his own dollars to Democratic candidates in the 2018 midterm elections, would enter the 2020 fray, but then he completed the paperwork to be on the Democratic primary ballot in Alabama.

Varney said he finds it ironic that Elizabeth Warren and Bernie Sanders, both of whom have "built their campaigns around getting rid of billionaires," are now running against "Bloomberg's mountain of money."

Warren and Sanders shouldn't be the only ones opposed to a Bloomberg run, however, the Fox Nation host observed --  warning Joe Biden of his new competition.

"Joe Biden can't be happy. Joe occupies the center. But his campaign is lackluster and he's not raising much money. Overnight, Bloomberg has taken over the middle ground.," Varney explained.

Varney credited Bloomberg for his deliberately late strategy, but his run "throws the party into even more chaos," he said.

"His strategy is unusual, but very smart. He'll enter the race deliberately late. He'll let his competitors tear each other apart and spend their money and then jump into Super Tuesday in March. California and 14 other states hold primary votes that day. Bloomberg's billions will have an enormous impact," Varney said.

"And consider this," he added, "there may be an impeachment trial in the Senate right around that time, March of next year. Senators Warren Sanders, Klobuchar, Booker, Harris. They're not going to be on the campaign trail -- they'll have to be in D.C. passing judgment on the president."

Bloomberg's run further divides the Democratic Party, Varney explained, and he believes it "opens the door to a Trump win in 2020."

"It's hard to believe that Democrats welcome this," Varney said."I can't see the supporters of Warren and Sanders suddenly jumping ship for the $50 billion man. I can't see rural moderates getting behind a candidate who has no time for guns. And I can't see Southerners or Midwesterners supporting a climate warrior."

"Bloomberg not only splits the party, he throws it into even more chaos. And that means no matter who leads the Democrats next year, the party remains at war with itself."