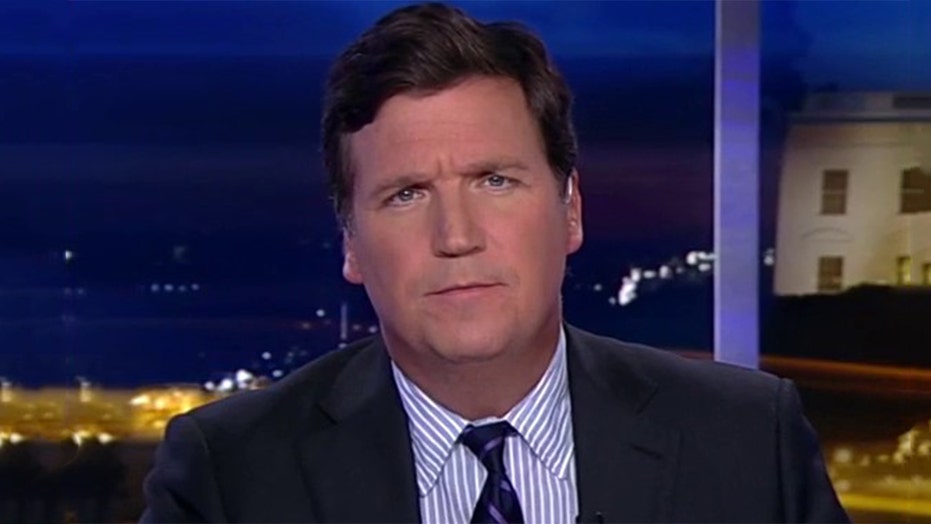 Tucker Carlson began his Thursday program where he left off Wednesday night, covering the Senate impeachment trial of President Trump and mocking the case made by Democrats in defense of the "noble, windswept Eastern European nation that is our single greatest ally in the world," Ukraine.

"All decent Americans stand with Ukraine. Now, for a moment, the president seemed to falter in his moral duty to stand with Ukraine," Carlson said sarcastically on "Tucker Carlson Tonight." "And for that, he's being impeached."

Carlson then played clips of the president's legal counsel Alan Dershowitz sparring with "Senators" Whoopie Goldberg, Joy Behar and Sunny Hostin on "The View," pretending that it was the impeachment trial.

"Well, let me ask you this very quickly ... Just for giggles. What if the president spent the year vacationing in Moscow, changed the language of this country, perhaps to Russian, or decided to stop doing his job entirely and perhaps golf all day?" Hostin asked Dershowitz, who struggled to give his answer to the hosts who interrupted him.

"Apparently there was some sort of unfortunate mixup in our tape library before the show and some of the video you just saw ... ah, yes, all the video, our producers are saying, was not, in fact, from today's Senate impeachment trial," Carlson revealed after playing numerous clips. "Those are not actually U.S. senators, though, of course, they easily could be."

Carlson then journeyed back to reality to blast the TV hosts.

"Like so many of the people who are running and commenting on this impeachment trial, they seem to have no idea what it's actually about," Carlson said. "They don't understand the charges. They know nothing about the historical precedent. Facts and details are irrelevant to them."

The host then compared "The View" personalities to Democratic members of the Senate.

"They are lazy and silly and wrong, but at the same time, they are utterly certain they're on the morally correct side of history. They know they're good people, excellent people actually, not like that horrible old orange man who speaks Russian and the rubes who voted for him," Carlson said. "They know all that for certain. So in their view, they've got the big things totally right. And that's all that matters. And so in that way, despite the tape mix up, it really could have been the impeachment trial."