As colleges issue controversial mandates that students be vaccinated or not attend classes, and reports surfaced of numerous deaths potentially caused by the various coronavirus vaccines, the inventor of the mRNA technology that went into some of the vaccines told Fox News on Wednesday that Google-owned YouTube deleted a posting of a podcast during which he discussed his concerns and findings.

As "Tucker Carlson Tonight" host Tucker Carlson noted, Dr. Robert Malone is "the single most qualified" expert on mRNA vaccines, but that the Big Tech companies are asserting themselves as more informed than him on the topic.

"A Norwegian study conducted of 100 nursing home residents who died after receiving Pfizer's Corona shots. They found that at least ten of those deaths were likely caused by the vaccine. 10%," said Carlson.

Meanwhile, the New York Post reported that researchers found a link between rare cases of juvenile heart inflammation and vaccines from Pfizer and Moderna, which utilize the mRNA route.

"Young adults in the prime of their lives are being forced to take the vaccine because Tony Fauci said that," Carlson said, adding that Malone "has a right to speak," given his expertise. 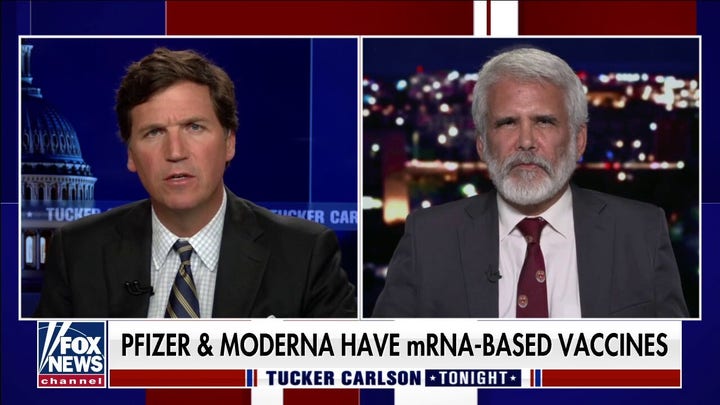 "[O]ne of my concerns are that the government is not being transparent with us about what those risks are. And so, I am of the opinion that people have the right to decide whether to accept vaccines or not, especially since these are experimental vaccines," Dr. Malone said, pointing to the fact the vaccines are not formally approved but instead being administered under Emergency Use Authorization.

"This is a fundamental right having to do with clinical research ethics," he said. "And so, my concern is that I know that there are risks. But we don't have access to the data and the data haven't been captured rigorously enough so that we can accurately assess those risks – And therefore … we don't really have the information that we need to make a reasonable decision."

Malone said that in the case of younger Americans, he "has a bias that the benefits probably don't outweigh the risks in that cohort."

But, he noted there is no substantive risk-benefit analysis being applied to the vaccines.

"That is one of my other objections, that we talk about these words risk-benefit analysis casually as if it is very deep science. It's not. Normally at this stage, the CDC would have performed those risk-benefit analyses and they would be database and science-based. They are not right now," said Malone.

Students at Indiana University in Bloomington, Ind., retained counsel to sue the school this week over its vaccine mandate, while in Annapolis, Md., students in the University of Maryland system protested last month against a blanket vaccine mandate there.