Tucker: The memory of Dr. Seuss matters more than ever

The decision to halt publication of six books by famed children's author Dr. Seuss will "have consequences that extend for generations," Tucker Carlson warned Tuesday, telling viewers that "if we lose this battle, America is lost."

The "Tucker Carlson Tonight" host devoted part of his show to what he called a "demented" and "incomprehensible" attempt to label Seuss a racist following the announcement that Dr. Seuss Enterprises would shelve books deemed to "portray people in ways that are hurtful and wrong."

The controversial announcement came as President Biden dropped Dr. Seuss from "Read Across America Day," the annual celebration of reading in honor of the legendary author.

"Dr. Seuss was not a racist," Carlson asserted. "He was an evangelist against bigotry. He wrote an entire shelf of books against racism, and not in a subtle way. They were clearly, explicitly against racism. That was the whole point of writing them, to teach children not to be racist."

LIZ PEEK: CPAC BLASTS CANCEL CULTURE -- COULD THE ATTACKS ON DR. SEUSS BE THE TIPPING POINT?

Conservatives will be quick to dismiss the effort as a symptom of the left's misguided cancel culture mentality, but "it's totally missing the point," Carlson said.

Carlson pointed to Seuss's work, "The Sneetches and Other Stories," written in 1961. The story describes a population of furry colorful creatures that are nearly identical to each other aside from a star shape displayed on the stomachs of only half of the population.

In the story, the starred Sneetches begin to feel disdain for their plain-bellied counterparts. 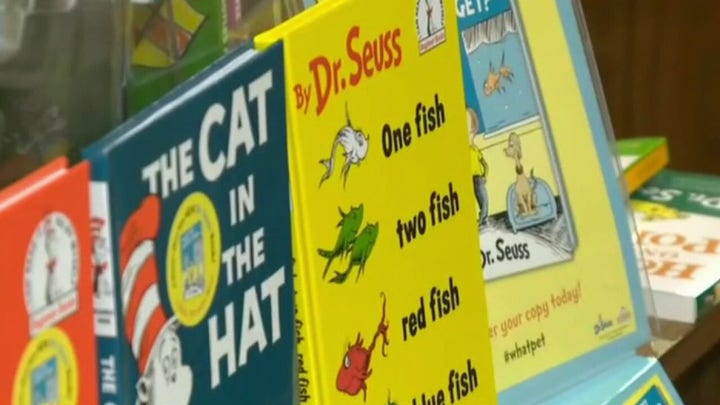 "There's no real difference between the two groups," Carlson recounts. "They don't know that. They're convinced stars are all-important so they spend the entire story jockeying for position based on the relative star-ness ... until they realize in the uplifting final pages of the story none of it matters. Underneath the stars, they're all the same, all Sneetches. Who cares who got a star?

"What matters isn't the group where you came from. What matters is you. Even a five-year-old gets the point of this story," Carlson argued. "At the deepest level, it doesn't matter what we look like, because underneath it all, we're all the same. We're all human beings. We're in this together. All that outward appearance stuff is pointless."

Carlson described the story as a "plea for color-blindness."

"That's why the forces of wokeness hate it and Dr. Seuss. When the people in charge cancel Dr. Seuss, what they're really trying to eliminate is a very specific kind of midcentury American culture, a culture that championed meritocracy and color-blindness and the superiority of individual achievement over tribal identity," he explained.

"These were once called liberal values. Modern liberals don't want to be reminded they once believed any of this. If your kids are allowed to read Dr. Seuss, they will know this was a different country not so long ago, a place where people tried hard not to hate each other, a place where the population was encouraged, begged by its leaders to reject identity politics in favor of universal values and the things that connect us all."