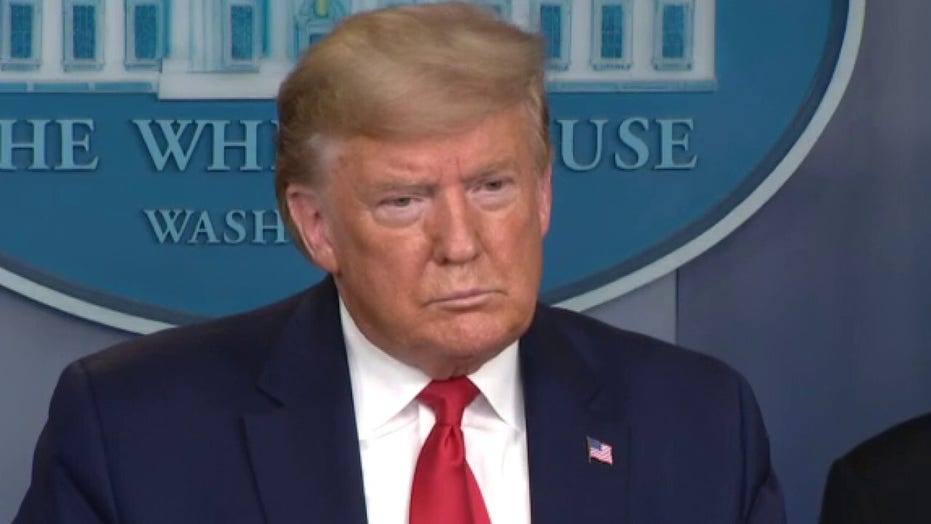 President Trump: Americans want to go back to work

The mainstream media were clamoring for regular press briefings from President Trump and his administration long before the coronavirus crisis escalated. Former press secretary Sarah Sanders stopped the daily routine in early 2019 and they eventually came to a halt altogether — much to the chagrin of many media members.

But after Trump and his coronavirus team, including Vice President Mike Pence, Dr. Anthony Fauci, U.S. Surgeon General Dr. Jerome Adams and Dr. Deborah Birx, began providing them on a daily basis in late February, some media figures said their networks should stop airing them, leading critics to question the sudden about-face.

Before coronavirus totally dominated the nation's psyche, it was commonplace for mainstream media to complain that President Trump and his administration had ditched daily press briefings in favor of less formal gaggles sometimes drowned out by the noisy Marine One.

But the coronavirus pandemic put Trump and the White House task force in the James S. Brady Press Briefing Room on a daily basis, and when it did, some of the same media complained the press conferences shouldn’t even air.

'CONCERT FOR AMERICA' LIKE NOTHING EVER PRODUCED: 'WE'RE ALL CONNECTED VIA LIVING ROOMS'

“It turns out that journalists lied. They don't really want press briefings. They want a daily opportunity to push their agenda and beat up President Donald Trump,” Media Research Center vice president Dan Gainor told Fox News. “When it turned out Trump was benefiting from the daily briefings and the media looked bad as a result, then they wanted to cancel them."

New York Times media reporter Michael Grynbaum wrote a piece on Wednesday questioning whether or not networks should air the briefings live.

STEPHEN KING PANNED FOR CLAIMING CORONAVIRUS TASK FORCE WAS 'ALL MALE... ALL WHITE'

“President Trump is a ratings hit, and some journalists and public health experts say that could be a dangerous thing,” the Times wrote. “The audience is expanding even as Mr. Trump has repeatedly delivered information that doctors and public health officials have called ill-informed, misleading or downright wrong.”

Grynbaum’s examples of deceptive statements include the president comparing coronavirus to the flu and invoking the death toll of car accidents. He also mentioned the death of an Arizona man who recently “died after he and his wife consumed a form of chloroquine, a drug that Mr. Trump has promoted on the air.”  What the Times’ media reporter failed to mention is that the man drank fish tank cleaner that happened to include a form of chloroquine, which had obviously not been prescribed by a doctor.

SCARBOROUGH RIPPED FOR FALSELY CLAIMING 'NO DOCTORS' WERE AT WHITE HOUSE PRESSER, URGES NETWORKS TO CUT AWAY

Grynbaum has plenty of likeminded members in the mainstream press. MSNBC host Joe Scarborough recently tweeted: "There is no public benefit to this briefing. The networks should all cut away."

“If it were up to me, and it's not, I would stop putting those briefings on live TV. Not out of spite but because it's misinformation,” Maddow told viewers last week. “If the president does end up saying anything true, you can run it as tape but if he keeps lying like this every day on stuff this important, all of us should stop broadcasting it. Honestly, it's gonna cost lives."

“My two cents: There should be daily televised WH briefings *led by doctors and scientists* When the briefings veer into Trump rally territory, they lose value,” Stelter recently tweeted.

The Daily Beast reported this week that CNN and MSNBC staffers are peeved their bosses continue to air the briefings.

Cornell Law School professor and media critic William A Jacobson told Fox News that the “anti-Trump media forgot the maxim, 'Don't wish too hard for something, you might get it.'”

“Media demanded greater access to Trump, and they got it. He takes dozens of questions at these daily press briefings from hostile reporters. And he's handling it so well that the ratings are through the roof and his favorability soaring,” Jacobson said.

“News outlets demanded daily press briefings because they believed those press briefings would do political damage to President Trump. Now that it is clear – given his rising poll numbers – that daily briefings are actually helping him politically, suddenly they don’t want to cover it,” Barron said. “At the end of the day, almost every single decision the mainstream media makes is guided by whether it helps or hurts Trump.”

The majority of criticism regarding Trump’s coronavirus briefings has come from liberal pundits, not the White House reporters who actually cover the event. But DePauw University professor and media critic Jeffrey McCall penned a column for The Hill condemning “press corps theatrics” that has occurred inside the room, too.

McCall doesn’t think the events are perfect, saying they’re too long and allow for political posturing — but he doesn’t think “media grandstanding or Trump resistance” is helping the nation overcome the growing pandemic.

“Reporters have been demanding transparency and access from the Trump administration since inauguration day, and now they have it,” McCall wrote. “The president and the COVID-19 response team are right there every day now for live questions in front of the entire nation. The journalists in the briefing room are fouling up this great opportunity.”

President Obama's former speechwriter and founder of Crooked.com founder Jon Favreau, a staunch Trump critic, agreed that the press room reporters might want to try stepping up their game, while also lambasting the president.

"That was a piss poor performance by the reporters in the briefing room. Just embarrassing," he wrote in a tweet on Thursday. "There is zero reason to give the President a free campaign commercial every day where he's free to spread misinformation that could kill people."