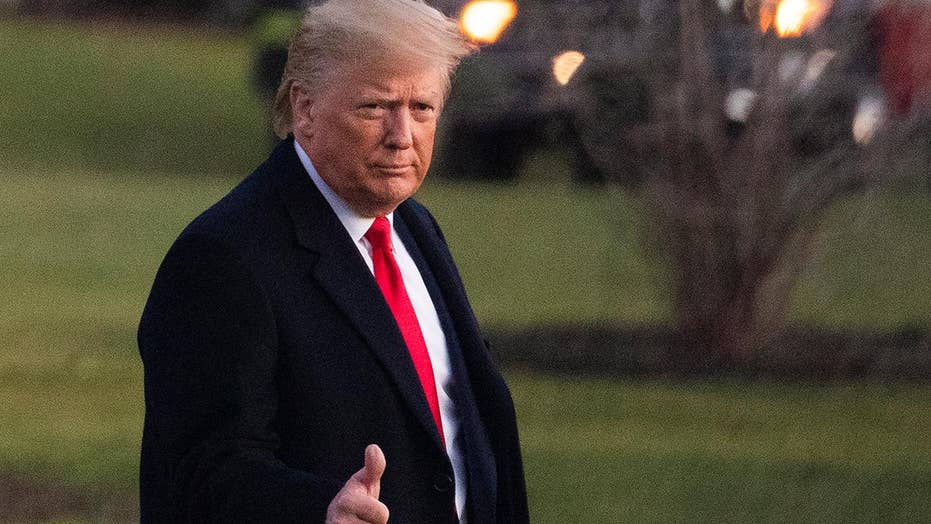 Trump campaign says polls are on president's side on impeachment

Trump has been an outspoken critic of many mainstream media organizations, often calling CNN “fake news,” declaring The New York Times “failing,” mocking "Amazon The Washington Post" and sometimes claiming NBC is the worst of the bunch. But when lawmakers voted to impeach the president for abuse of power and obstruction of Congress on Wednesday night, many media members seemed to display the bias that Trump has so often alleged.

A group of Washington Post reporters who moonlight as CNN pundits celebrated “Impeachmas” over drinks, bragging about the gathering in a now-delated tweet.

"Ladies & gentlemen, your fair and objective press corps in action! What a joke," Brad Parscale, Trump's 2020 campaign manager, tweeted in response. "Media needs to stop acting like they are 'impartial.'"

Former CNN host Piers Morgan mocked the “Impeachmas” photo, writing that it confirmed that “most of America’s mainstream hates him and is absolutely thrilled to see him impeached.”

Morgan also listed several celebrities who raced to Twitter to express joy over impeachment before asking, “Do you not understand it all ends in a big loss for Trump-haters and a big win for Trump?”

He predicted that the president is now poised to be "laughing all the way to re-election."

MSNBC’s Rachel Maddow “could barely contain her excitement,” according to NewsBusters managing editor Curtis Houck. Maddow smirked as she told viewers they are “not asleep” and “this is not a dream” before announcing Trump has been impeached.

CNN'S JAKE TAPPER CRITICIZED FOR WHAT HE CALLS THE 'BIG DIFFERENCE' BETWEEN TRUMP, CLINTON IMPEACHMENTS

“Maddow thanked viewers for tuning in and said many of the same things teenage girls would either say upon finding out they’re attending a Taylor Swift concert or will be going on a date with Harry Styles,” Houck wrote. “Golly gee, Rachel! It’s like you and your fellow lefties have waited your whole life for this!”

MSNBC anchor Katy Tur tweeted that Trump “will forever have an asterisk next to his name,” while CNN's Chris Cillizza wrote that the "first paragraph of his political obituary" will mention that he was impeached.

Meanwhile, CNN fawned over Pelosi throughout the day, as anchor Jake Tapper praising the speaker for keeping "most of the Democrats in line" and keeping them "solemn" and "serious" throughout the impeachment inquiry. The liberal network’s chief political analyst Gloria Borger claimed Pelosi was "pitch-perfect" or "almost pitch-perfect" with her handling of the impeachment process.

"She understands the solemnity of the moment," Borger explained. "This is her flock and some of them are young and some are credibly partisan and she warned them, 'No applause. This is not a time for applause.'"

CNN's chief political correspondent Dana Bash reported from Capitol Hill that Pelosi's "look" and "the flick" of her hand were the buzz from the floor, saying the combination of the two "said it all."

“CNN couldn’t have been giddier about Wednesday night’s impeachment of President Donald Trump,” Houck wrote. “For a network that, at the end of the day, so desperately hates both the President and his supporters, people were bursting at the seams. We’d expect nothing less from the Jeffrey Zucker-led network.”