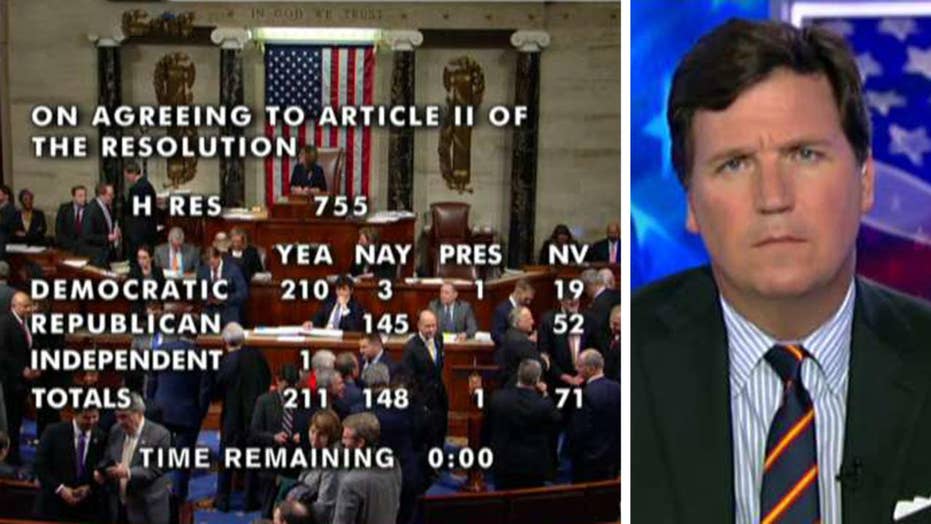 Tucker: Neither article of impeachment accuses Trump of breaking a law

Even though Pelosi had to silence the two rounds of cheers from Democrats after the articles were adopted, CNN anchor Jake Tapper praised the speaker for keeping "most of the Democrats in line" and keeping them "solemn" and "serious" throughout the impeachment inquiry.

"They have not rejoiced, they have treated this day with the gravity it deserves," Tapper told the panelists, later citing the "few" incidents involving outspoken Democrats such as Reps. Rashida Tlaib of Michigan and Al Green of Texas.

"She understands the solemnity of the moment," Borger explained. "This is her flock and some of them are young and some are credibly partisan and she warned them, 'No applause. This is not a time for applause.'"

CNN'S JAKE TAPPER CRITICIZED FOR WHAT HE CALLS THE 'BIG DIFFERENCE' BETWEEN TRUMP, CLINTON IMPEACHMENTS

Borger then reacted to Pelosi's facial expression to the group of Democrats applauding the first article of impeachment, saying, "that look could kill!"

CNN's chief political correspondent Dana Bash reported from Capitol Hill that Pelosi's "look" and "the flick" of her hand were the buzz from the floor, saying the combination of the two "said it all."

"When she walked by here, oh I don't know, about 12 hours ago onto the House floor, I asked, 'How are you feeling,' and she said, 'Sad,'" Bash recalled. "That was the tone that she was trying to set, and that was the atmosphere that she wanted around this process that she reluctantly allowed and guided the Democrats through. And so, that is why that moment is so significant because it really encapsulates the kind of leader she is."

CNN strongly praised Speaker Nancy Pelosi for her conduct on the day of the House impeachment vote. (House Television via AP, Montage)

"She also understands power, right? I mean, grew up in Baltimore, seeing her father there wield power and then going to California and working her way up there as a woman, which must have been very hard," Henderson elaborated. "It's been interesting seeing her in this process as a woman wielding this power."

Tapper returned with another round of compliments, pointing to a town hall Pelosi attended on the anti-Trump network.

"I think she actually does feel the gravity of this moment and now that both of these articles of impeachment have been gaveled down, again, let us just take a moment -- this has only happened two other times in the United States' history," Tapper said. "President Trump has now been impeached on two articles: abuse of power and obstruction of Congress. And, this is a stain that will forever live on his presidency when we're all long gone, 300, 400, 500 years from now. That might be the only thing people will know about Donald Trump, that he was impeached."