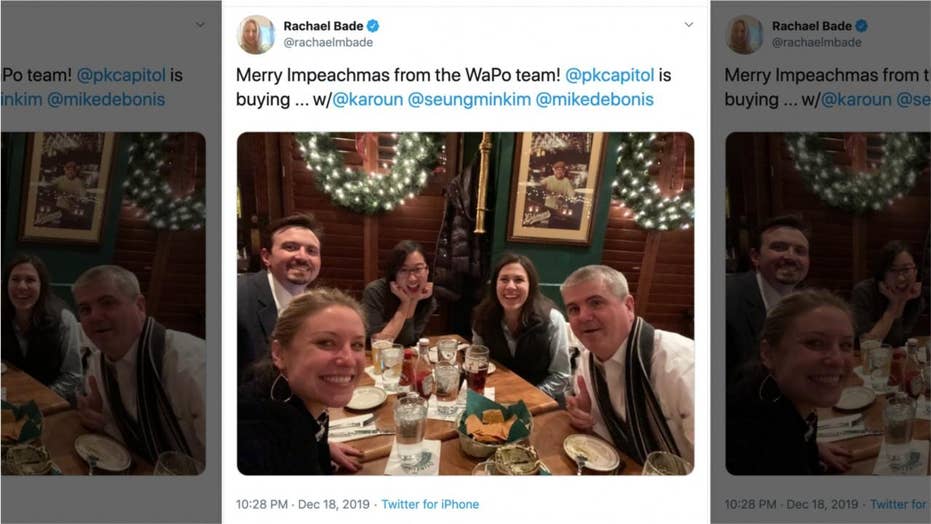 Merry 'Impeachmas?' That’s what a group of CNN and Washington Post reporters were celebrating in a controversial tweet hours after President Trump was impeached.

House Speaker Nancy Pelosi, D-Calif., continued to insist that the impeachment -- just the third in U.S. history -- was a "solemn" occasion for the nation but that did not appear to be the case for the group of WaPo journalists, who were seen in an online post marking the historic night with drinks.

"Merry Impeachmas from the WaPo team!" WaPo Congress reporter and CNN political analyst Rachael Bade remarked in the post, in which she was seen with colleagues Paul Kane, Mike DeBonis, as well as Seung Min Kim and Karoun Demirjian, who also are CNN analysts.

Bade deleted the tweet roughly an hour after it was posted.

A screen capture shows Rachael Bade's "Impeachmas" celebration post, which has since been deleted.

However, before it was taken down, the tweet sparked a firestorm of criticism on social media.

"Ladies & gentlemen, your fair and objective press corps in action! What a joke," Parscale wrote. "Media needs to stop acting like they are “impartial."

Bade attempted to explain her now-deleted tweet, claiming that it was "misinterpreted by some."

"I’m deleting a tweeting tonight that is being misinterpreted by some as an endorsement of some kind," Bade wrote. "To be absolutely clear, we at the Post are merely glad we are getting a break for the holidays after a long 3 months. I will retweet the group photo w/ a better caption!"

Bade did not immediately respond to Fox News' request for comment.