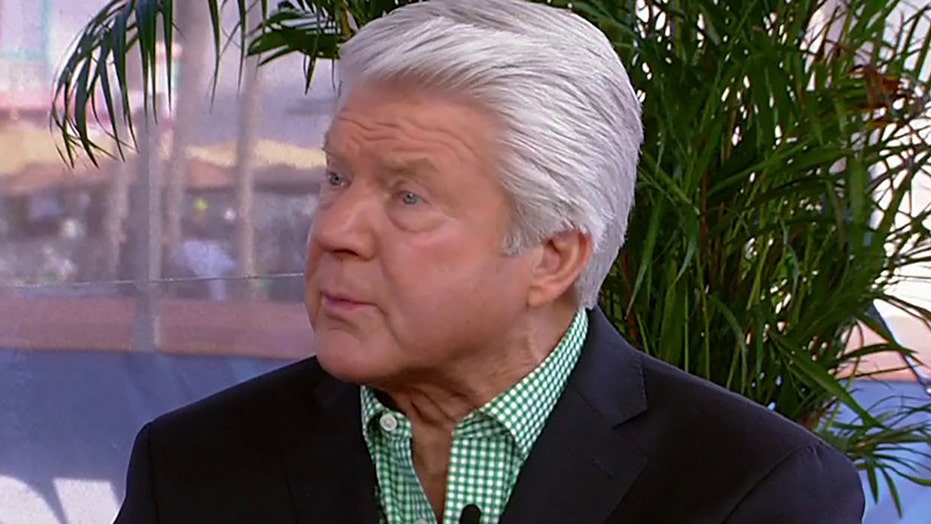 Jimmy Johnson talks Super Bowl LIV, emotional moment he found out he'll be in the Hall of Fame

Fox Sports commentator Jimmy Johnson reflects on his legendary career on and off the field and previews the 49ers-Chiefs Super Bowl on 'Fox &amp; Friends.'

FOX Sports has taken over Miami for the network's ninth Super Bowl, offering more than 100 hours off live programming across FOX, FS1 and FOX Deportes with a massive South Beach studio constructed specifically for the big game.

It’s the sixth Super Bowl that Buck and Aikman have worked together, the most by any active broadcasting duo. Erin Andrews and Chris Myers will report from the field with two former NFL officiating executives -- Mike Pereira and Dean Blandino -- serving as rules analysts. The kickoff will come after seven hours of pregame programming featuring fan favorites Terry Bradshaw, Howie Long, Michael Strahan, Jimmy Johnson and Curt Menefee, among many other FOX Sports personalities.

Buck, the son of late broadcasting legend Jack Buck, will call his sixth Super Bowl in Miami when the San Francisco 49ers battle the Kansas City Chiefs. He has been FOX Sports’ lead play-by-play broadcaster for the NFL on FOX since 2002 and calls "Americas Game of the Week" in addition to "Thursday Night Football."

Joe Buck has been FOX Sports’ lead play-by-play broadcaster for the NFL on FOX since 2002.

The Indiana University grad joined FOX Sports in 1994 and became the youngest person to ever call a full season of NFL action. He was the network’s lead MLB play-by-play announcer by 1996, when he became the youngest person to call the World Series at age 27. He has emerged as a pop culture icon, appearing in a variety of television shows and movies, often poking fun at himself in the process.

The annual Joe Buck Classic golf tournament has raised more than $5 million for St. Louis Children’s Hospital since it began in 2000.

Troy Aikman won three Super Bowls as a player but a new generation of fans will remember him as an accomplished broadcaster on FOX. (Brian Bahr/Getty Images)

Aikman is among the most accomplished quarterbacks to ever play the game, and his storied career as a broadcaster has allowed a new generation of fans to embrace him. He became FOX’s lead game analyst in 2002 after only one season of broadcasting experience after wrapping up his playing career after the 2000 season. Aikman’s Hall of Fame playing career featured 45 Dallas Cowboys passing records, including throwing for 32,942 yards and 165 touchdowns.

Aikman’s Cowboys won three Super Bowls and are considered one of the greatest teams in NFL history. He earned six Pro Bowls, the 1992 Super Bowl MVP, 1997 Walter Payton Man of the Year, made the 1989 NFL All-Rookie Team and was the first overall selection in the 1989 NFL Draft.

THE FIRST SUPER BOWL WAS BROADCAST ON TWO NETWORKS, BUT YOU'RE NOT ALLOWED TO WATCH IT TODAY

Andrews is among the most popular sports reporters in the industry and reports from the sideline for both “Thursday Night Football” and “Americas Game of the Week.”

Andrews will cover her third Super Bowl, previously working Super Bowl XLVIII and Super Bowl LI. She also covers MLB on FOX, including the World Series and even competed on ABC’s “Dancing With The Stars” during its 10th season, finishing third alongside partner Maksim Chmerkovskiy. Her "DWTS" gig went so well, she now co-hosts the show!

The Emmy Award-winning Myers worked a full slate of regular-season NFL games as a play-by-play announcer before pivoting to sideline reporter for the postseason.

The sharp-dressed Pereira spent 14 years as an NFL executive, overseeing the officiating department in a variety of roles. He was named Vice President of NFL Officiating in 2004 and walked away in 2009, joining FOX Sports in 2010 and changing the way games are analyzed in the process. Pereira serves as a rules analyst, walking viewers through complex rules interpretations and explanations.

Pereira, who was nicknamed “Hollywood Mike” during his time as an NFL executive, spent two seasons on the field as a sideline judge. He also spent 14 years as a college football official and contributes to the FOX College Football game broadcasts.

Blandino followed in Pereira’s footsteps as Vice President of NFL Officiating after working his way up from intern. He was also an NFL Instant Replay Official from 1999-2003, where he was selected to work two Super Bowls. He’s considered one of the world’s foremost experts on instant replay and works with a variety of leagues, including the XFL and NCAA in addition to serving as a Fox Sports rules analyst.