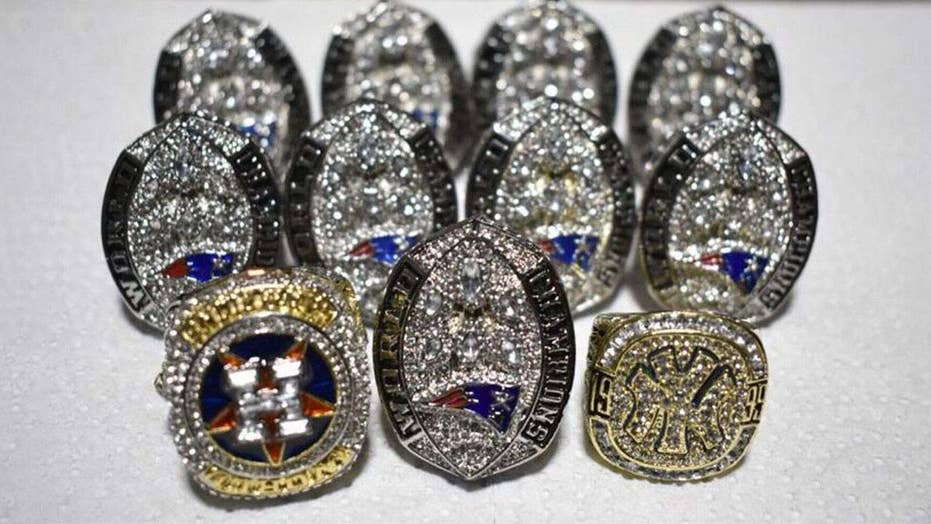 The faux merchandise business has costly repercussions for the United States

The first Super Bowl was broadcast on two TV networks and watched by millions of fans, but today the historic telecast is under lock and key, and viewable by only a lucky few.

1967's title game between the Kansas City Chiefs and Green Bay Packers, dubbed the AFL-NFL World Championship Game, was played at the Memorial Coliseum in Los Angeles and was broadcast by both NBC, the official broadcaster of the AFL, and CBS, which had the rights to NFL games.

CBS’s version was called by Ray Scott, Jack Whitaker and Frank Gifford, while Curt Gowdy and Paul Christman were in the booth for NBC. The game attracted a whopping 50 million total viewers between the two telecasts. The total population of the U.S. in 1967 was about 200 million — so approximately a quarter of the country watched, an early testament to the sport's popularity.

Fred Williamson of the Kansas City Chiefs lies prone on the field during the first AFL-NFL World Championships against the Green Bay Packers on January 15, 1967. (Photo by Robert Riger/Getty Images)

But if you weren't around to watch the game live in 1967 you haven't seen either of the first telecasts, as the only known recording is locked in a vault in New York City, and can't be aired.

Troy Haupt, a nurse anesthetist in North Carolina’s Outer Banks, owns the valuable copy of the CBS version (the NBC version is lost to time). A prolonged legal standoff between Haupt and the NFL has prevented the footage from being shown, which is why the tape is currently behind lock and key at the Paley Center for Media.

The NFL has said it must protect its intellectual property and hasn’t been able to come to an agreement with Haupt, whose father, Martin Haupt, recorded the game on an old Quadruplex taping machine. It then sat in a Pennsylvania attic for 38 years before it was restored by the Paley Center.

Ron Simon, Paley Center's curator of television and radio, told Fox News that he’s among a “handful” of people who have seen tape.

“It is the very beginning of football becoming a major television sport and the technology is part of the times. If you look at it today, it looks somewhat primitive," Simon said.

“The producers of the game were just learning how to use instant replay and they would remind you of that fact,” Simon said. “You don’t really have cameras focused on individual players and sometimes the replays are just not as sharp as they were 10, 15 years after that.”

The halftime show and a large chunk of the third quarter are missing from the footage. Simon said the original CBS broadcast gave viewers “a sense of the game” but lacked elements that are now an afterthought, such as a visible scoreboard.

“Probably the most famous play of the game where Max McGee catches a touchdown… for the instant replay it said ‘video tape’ on it, they didn’t want people to get confused,” Simon said. “He scored a touchdown, they are congratulating him and you still don’t know what the score is until after the extra point.”

Simon explained it was a “rather naked” screen with statistics “few and far between.” While the game was not officially called the Super Bowl, Simon noted that announcers during the game did use the moniker on occasion.

With the recording unavailable to them, the NFL went to extraordinary lengths four years ago to produce a reasonable facsimile to celebrate the game’s 50th anniversary. NFL Films’ “Super Bowl I: The Lost Game” is as close anyone who doesn't work at the Paley Center can get to watching the original telecast.

Sports commentators Paul Christman, for NBC, and Frank Gifford, for CBS, on Jan. 15, 1967. (Photo by CBS via Getty Images)

“In an exhaustive process that took months to complete, NFL Films searched its enormous archives of footage and were able to locate all 145 plays from Super Bowl I from more than a couple dozen disparate sources,” an NFL rep explained at the time.

“Once all the plays were located, NFL Films was able to put the plays in order and stitch them together while fully restoring, re-mastering, and color correcting the footage,” the rep said. “Finally, audio from the NBC Sports radio broadcast featuring announcers Jim Simpson and George Ratterman was layered on top of the footage to complete the broadcast.”

Fast-forward to 2020, and the Super Bowl is one of the biggest TV events of the year and the most technologically advanced live broadcast imaginable. Super Bowl LIV is expected to draw a TV audience of roughly 100 million people, and FOX’s broadcast features the latest cutting-edge technology.

The first Super Bowl was played at the Memorial Coliseum in Los Angeles, Jan. 15, 1967. In foreground is announcer Ray Scott. Wearing headset is commentator Frank Gifford. In the background, holding binoculars, is Jack Whitaker. (Photo by CBS via Getty Images)

Ahead of Sunday's Super Bowl LIV, FOX built a massive compound in Miami, where the network will broadcast more than 100 hours of live Super Bowl programming with more than 50 square meters of LED walls and 25 cameras, including a moveable two-point Flycam, all before the main event even kicks off.

Once the Kansas City Chiefs and San Francisco 49ers take the field at Hard Rock Stadium, FOX will deliver the action in 4K Ultra High Definition and High Dynamic Range. Super Bowl LIV will feature 70 manned and robotic cameras along with over 20 end-zone and end-line pylon cameras, a wireless line-to-gain camera, two Skycams and seven wireless handhelds. Fox will use 72 field mics to pick up all possible audio.

Fans can also stream Super Bowl LIV on the FOX Sports and FOX NOW apps, allowing the game to be seen on a variety of devices.

A far cry from the inaugural broadcast, which we may never see.