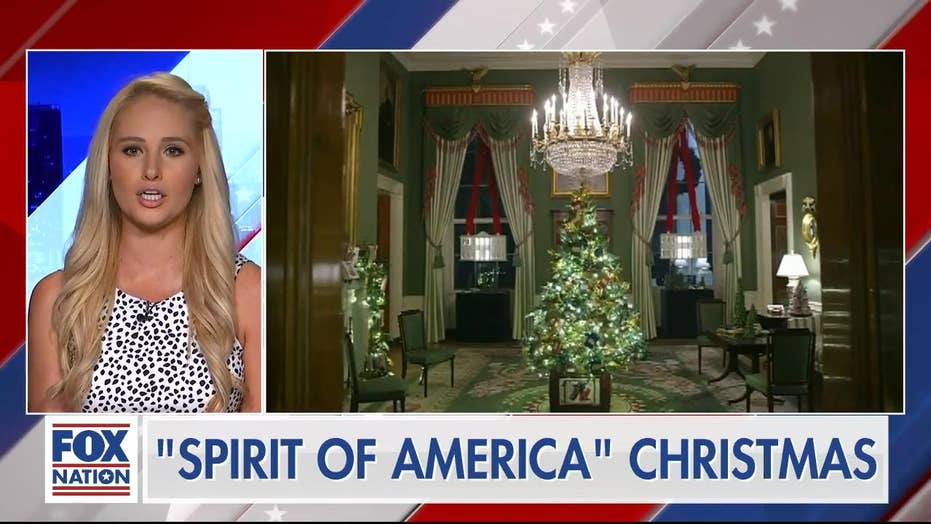 Fox Nation host Tomi Lahren came to first lady Melania Trump’s defense on Thursday after she found herself on the receiving end of online mockery for the White House Christmas tree display, which she debuted on Monday.

"The left has always taken issue with first lady Melania’s Trump’s Christmas decorations because quite obviously, they take issue with absolutely anything anyone with the last name  'Trump' does, says, doesn’t say, tweets, or breathes," Lahren said on her Fox Nation show, "Final Thoughts."

The first lady introduced the "Spirit of America” display with a video, walking alongside Christmas trees glowing with white lights, later sprinkling faux snow on a tree, adjusting roses on a fireplace and fixing a miniature wreath on the traditional gingerbread White House in the State Dining Room.

Many were quick to criticize the holiday decorations, claiming that the first lady's “Spirit of America” video was reminiscent of a horror film, comparing its contents to the movie “The Shining.”

"This was just another bitter and sorry attempt to attack our president by attacking his wife, our first lady."

This year's criticism comes after the two previous exhibits were derided. Last year's “blood red trees” and 2017’s hallway of "sticks" were also compared to horror flicks such as “The Blair Witch Project.”

"This was just another bitter and sorry attempt to attack our president by attacking his wife, our first lady. The first lady, who is not only a legal immigrant but speaks five languages and launched an anti-bullying campaign  -- all while gracefully dealing with the daily vitriol and hatred from the left," Lahren said on the Fox Nation show.

Lahren also slammed a recent Daily Beast article titled "Melania Trump's Joyless Christmas Decorations Are Back to Haunt Your Nightmares," where they referred to the Spirit of America-themed decorations as “state-sponsored jingoism.”

"They couldn’t help themselves from comparing Melania’s red trees to 'The Handmaids Tale,' 'The Shining' or pig's blood, because decorating in Christmas red is enough to trigger liberals," she said. "And folks, this year was no different."

The article attacked almost every aspect of the debut video -- including the background music which they referred to as, “the faux-soothing, too-repetitive kind that causes department store Santas to drink throughout their shifts.”

"Wow, all that from a leftist publication that I seriously doubt gives a rat’s a** about Christmas, the Christmas story, the meaning of Christmas, or baby Jesus in general," Lahren responded.

"Luckily, Melania is a tough cookie and when she goes to bed in the White House every night I doubt she cares about what some keyboard warrior from the Daily Beast thinks about her or her decorations."

On Wednesday, fellow Fox Nation host Rachel Campos-Duffy also came to the first lady's defense, after the Washington Post's fashion critic criticized Melania Trump’s outfit in the unveiling video, calling her coat  "a distraction” and “a discomforting affectation taken to a ludicrous extreme.”

"I think that she has been subjected to such cruel treatment, really unfair treatment and the other first ladies have been really silent on that,” Campos-Duffy told “Fox & Friends” on Wednesday.