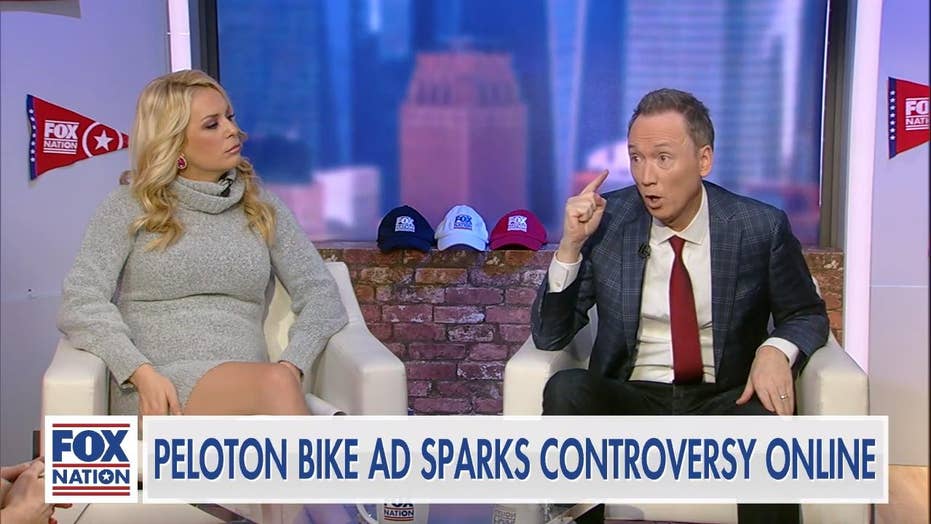 "I want to talk about this ad for days and days," Fox Nation host Tom Shillue said, responding to recent backlash over Peloton’s controversial holiday commercial.

"Everyone's nuts, our whole culture is so crazy .. .what possibly could be the problem with this?" he asked.

The stationary bike company’s “The Gift That Gives Back” video ad has gone viral for all the wrong reasons, as commenters blasted the promotion as sexist and mocked its message.

The ad features a husband surprising his wife on Christmas morning with an exercise bike, showing her gasping with shock after lifting her hand from her eyes.

"A Peloton?!?" the wife exclaimed in disbelief.

The ad then follows the wife — identified at one point as “Grace in Boston” — as she tracked her journey with the exercise bike. Over the course of a year, the woman documented her Peloton workouts with video diaries, and ultimately presented her partner with a compilation montage of her progress.

The Twitter community had a field day with the clip’s complicated undertones, with commenters taking issue with everything from the woman’s “rail-thin” frame to her “creepy” husband’s “abusive” desire to monitor her exercise routine in the first place.

Discussing the "outrage culture" on Fox Nation's "UNPC," Shillue had strong words for the ad's critics.

"First off, I can't even believe this is controversial," he said. "It's just a commercial. It's a fitness ad....all fitness ads are like this."

After watching the ad "about 40 times," Shillue, a comedian and host of the Fox Nation show, said it was the actress' "expressive" eyebrows that fueled the immediate backlash.

"Do you see her eyebrows going up? She is expressing doubt. She is not that powerful woman who is in charge of everything. She is expressing that very female trait of 'Oh can I do this?'...a little bit of doubt and these people can't take it because they're nuts," he said.

Co-host Britt McHenry echoed Shillue's point and questioned whether the recipient's excitement over a potential Peloton Christmas gift makes her "weak as a woman."

"When this started trending I refused to click on it because I'm so sick of the outrage culture," she said.

Appearing as a guest on the show, Federalist contributor Kate Hyde observed the similarity of the controversial ad to previous Peloton commercials — which have gone uncriticized in past years.

"You know what's different," Shillue responded, "is that [in] the other Peloton ads, the women look like her, except they get on the bike, they're powerful, there's no doubt. The idea that she showed a little bit of vulnerability – this is how sick people are today – a woman showing vulnerability now is offensive to people. There is a sickness in our culture," Shillue said.

After days of remaining silent, the company responded to the backlash on Wednesday, telling Fox Business that they were "disappointed" with how some people online "misinterpreted the commercial."

To hear Shillue's full remarks on the Peloton ad controversy, the impeachment probe and more, join Fox Nation and watch the latest episode of "UNPC" today.