Made in the USA: Three prominent social media stars ditch TikTok for Triller

There is "nothing" stopping China from accessing children's personal data on TikTok, Kurt "The CyberGuy" Knutsson told Fox News on Saturday.

In an interview on "Fox & Friends Weekend,"  Knutsson explained that a 2017 cybersecurity law ensures that any technology company based in China "essentially becomes an arm of the Communist Party for the Chinese government."

"It's a law that says that the government can come in and use really at will any of the data that's there, look at the technology that's there."

"We’ve already seen [the] misuse of that countless times in hardware," Knutsson noted. "There’s nothing that is going to stop them from getting into personal-private data that your kids are putting up on TikTok."

This Feb. 25, 2020, file photo, shows the icon for TikTok in New York. President Donald Trump will order China’s ByteDance to sell its hit video app TikTok because of national-security concerns, according to reports published Friday, July 31, 2020. “We are looking at TikTok," Trump told reporters Friday at the White House. "We may be banning TikTok.” (AP)

TikTok has become wildly popular in the last few years, especially with teenagers, who use it to make short videos.

President Trump told reporters on Friday that he plans to ban the popular app from the United States.

“As far as TikTok is concerned, we’re banning them from the United States,” Trump told reporters on Air Force One.“I have that authority...It’s going to be signed tomorrow."

He said he could use an executive order or emergency economic powers to do so. 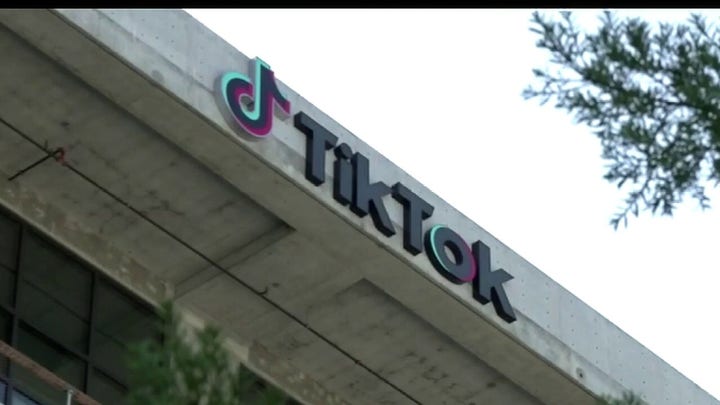 The move comes amid heightened tension between the U.S. and China over the coronavirus, trade, Hong Kong, and the closing of consulates over accusations of spying.

While many TikTok stars -- some with millions of followers -- are mourning the impending loss of the app, some are using the proposed ban as a jumping-off point to shepherd their followers over to another platform like the Los Angeles-based Triller which Knutsson says is "very similar to TikTok."

"The three people [who] are bailing on it that are making news – Josh Richards, Griffin Johnson, Noah Beck at TikTok – say they’re going to move on over with their 32 million people to this new app," Knutsson told "Friends Weekend" host "Griff Jenkins. "They said they just wanted their audience to be part of something that is, well, made in America."

However, The CyberGuy pointed out that whether the president "follows through" or has the "infrastructure to switch [TikTok] off or not" is a different question.