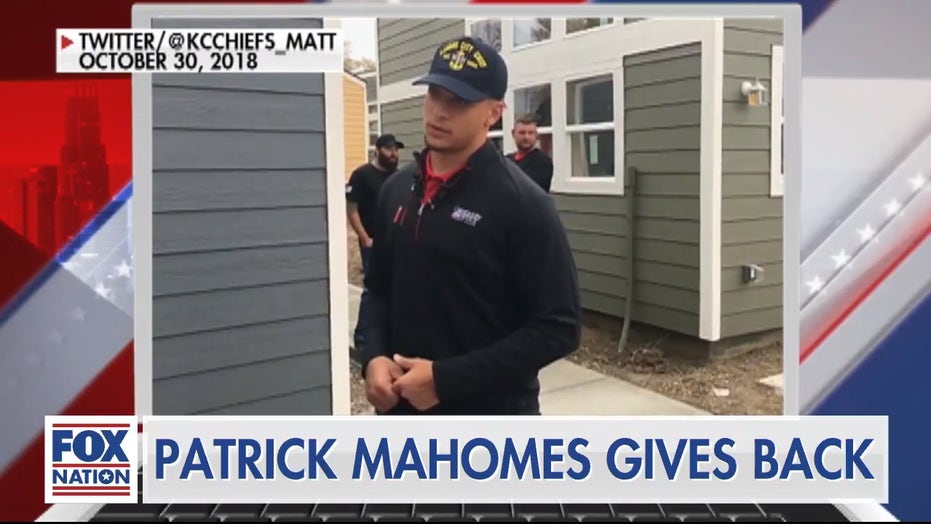 Tomi Lahren: Why we need more men like Patrick Mahomes

In the run-up to Super Bowl LIV, Kansas City Chiefs quarterback Patrick Mahomes is also winning accolades for the work that he does off the football field.

"When he's not throwing a football, claiming his title as NFL MVP or leading his team to the championship game, 24-year-old Patrick Mahomes is giving back to his community in more ways than one," said Fox Nation's Tomi Lahren on her show "Final Thoughts."

In April 2019, Mahomes announced the start of a new foundation, "15 and the Mahomies," during an appearance on "The Tonight Show" with Jimmy Fallon.

"It is a foundation that is designed all around kids. Kids from the underserved communities that don’t get the same opportunities that I had whenever I was young, kids that are in the hospital that have chronic illnesses or have suffered major injuries. Those are the kids that train harder than me by a hundred times — every single day. I want to make sure that I can give back to them in any shape or any way in order to get them the resources that they need to have an amazing life," he said.

"In the fall of last year, the foundation held its inaugural gala, raising a total of $225,000 for 15 different Kansas City youth programs," reported Lahren.

"But he wasn't done yet," she added. "Besides his youth charity work, Mahomes works with veterans' groups to give back to those who have fought and sacrificed, protecting and defending our country."

CAN YOU GUESS THIS FOX NEWS FATHER AND SON DUO?

Mahomes volunteered with Veterans Community Project, which is an organization based in Kansas City that supports homeless veterans. The Texas native reportedly helped build more than a dozen tiny homes for needy vets in 2018.

"He doesn't just donate money either. He isn't afraid to get out there and get his hands dirty — building transitional homes for our nation's veterans, struggling to get back on their feet."

"They give so much for us to be able to be where we are and be able to live the life that we live," said Mahomes in October 2018 in a video posted to Twitter. "For us to give back to them and give them somewhere where they can come back home and have a stable home and have a stable place for them to stay and live life is something that makes the least of what we could do for them."

"There are so many athletes, celebrities, politicians and public figures out there running their mouths, doing drugs, breaking the law and using their money and fame as an excuse and a pass," said Lahren. "So it's so refreshing to see a guy like Mahomes, who's not only an amazing and gifted athlete but a truly decent and generous human being."

"We need more men out there like Patrick Mahomes," she concluded.