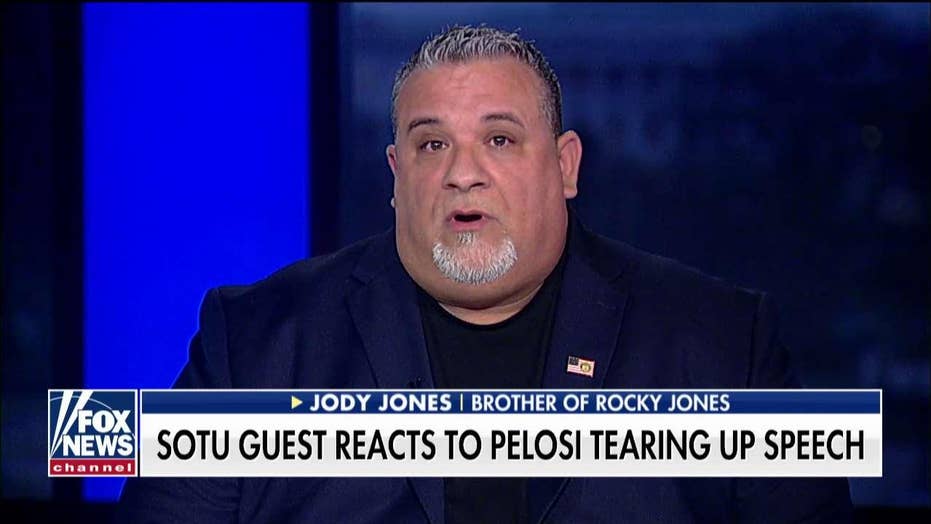 State of the Union guest's message to Nancy Pelosi

President Trump's State of the Union guest Jody Jones -- whose brother was murdered by an illegal immigrant -- reacts to House Speaker Nancy Pelosi ripping up the president's address,

A State of the Union guest of President Trump whose brother was murdered by an illegal immigrant has a message for Democratic House Speaker Nancy Pelosi.

Appearing on "Fox & Friends," Jody Jones -- a Farmersville, Calif., resident -- said that in Pelosi's decision to rip up her copy of the president's address, she effectively ripped the hearts of every guest in attendance out of their chests.

"It felt like she ripped our hearts out," he said.

"Everybody there. All of the guests. We couldn't believe it."

Following the conclusion of the speech, Pelosi said in a statement that the president's message to the country was not only deceitful but exposed a president unfit to hold office.

"The manifesto of mistruths presented in page after page of the address tonight should be a call to action for everyone who expects truth from the president and policies worthy of his office and the American people," she wrote. "The American people expect and deserve a president to have integrity and respect for the aspirations for their children."

All this came just one day before the Senate was slated to deliver its verdict in the impeachment trial that has divided the nation. Trump, who is widely expected to be acquitted, did not mention the proceedings directly in his speech.

"Speaker Pelosi just ripped up: One of our last surviving Tuskegee Airmen. The survival of a child born at 21 weeks. The mourning families of Rocky Jones and Kayla Mueller. A service member's reunion with his family. That's her legacy," the White House responded via Twitter.

Jones' eldest brother, Rocky Jones, was shot and killed at a Tulare County gas station in 2018. He was 51.

The Trump administration says California’s sanctuary state policy allowed the killer -- with a long criminal history and previous deportation orders -- to be released from jail.

"He was murdered by Gustavo Garcia," Jones said. "He was an illegal immigrant. He was a criminal. He was deported twice before. The second time, he actually did federal time. He was arrested two days prior for being under the influence."

Jones said that because the last arrest only warranted a misdemeanor charge in California, the Tulare County Sheriff's Department released Garcia within 10 hours.

"I.C.E. faxed over a detainer to Tulare County Sheriff's Department," he explained. "They couldn't honor it because of SB-54."

Two days later, Garcia went on a "reign of terror," killing Rocky and several others who were "in his line of sight." 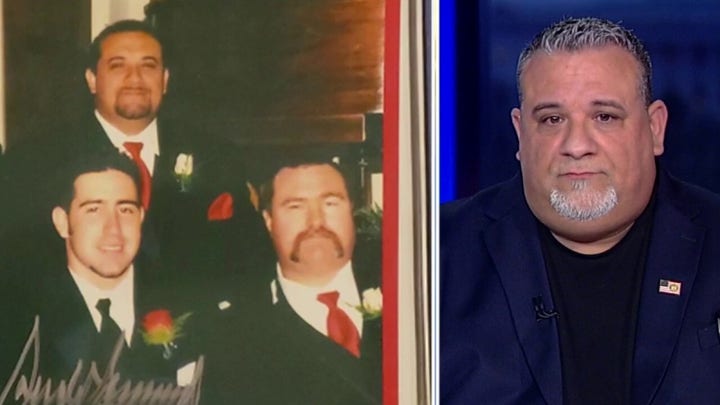 "Jody, our hearts weep for your loss," said the president.

"And, we will not rest until you have justice," he promised.

In the future, Jones told the "Friends" hosts he hopes that Pelosi will "think of other people" and that she will "do away" with SB-54.

"I don't care how you feel about somebody," he continued. "That was probably the most disrespectful thing I have ever seen in my life. Because, when she did that, it just tore us up. We couldn't believe it."