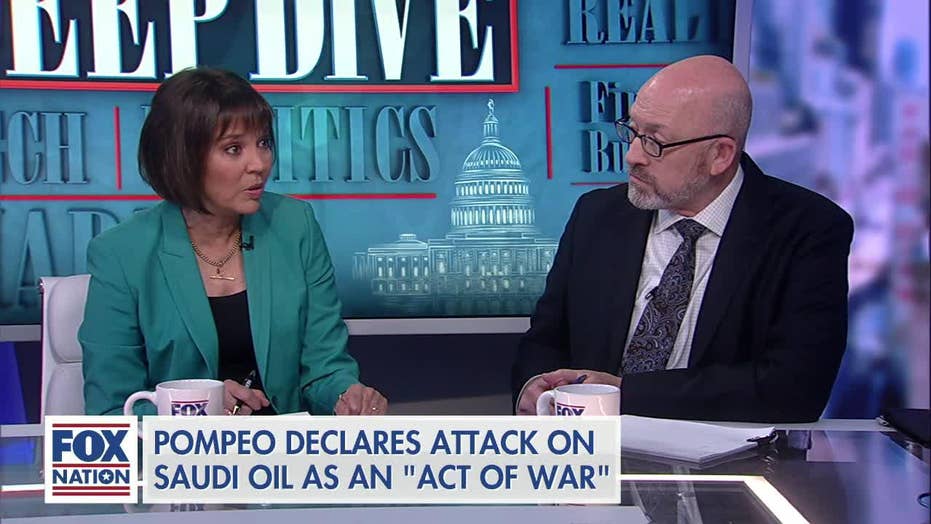 On Fox Nation's "Deep Dive," a panel of experts analyzed the world response to last weekend's crippling attacks on Saudi Arabia's oil infrastructure and explained why the Saudi government seems hesitant to explicitly accuse Iran of carrying out the strikes.

"If you look at the sophistication of the attack, the ranges of the weapons used, and how this was perpetrated, it can only be Iran really," said Lt. Col. Dakota Wood, who is a retired Marine and Senior Research Fellow for Defense Program at the Heritage Foundation.

At a press conference in Riyadh, Saudi Arabia on Wednesday, the Saudis displayed broken and burned drones and pieces of a cruise missile that military spokesman Col. Turki Al-Malki identified as Iranian weapons collected after the attack.  Tehran has denied that it carried out the attacks and Houthi rebels in Yemen have claimed responsibility.

Speaking from Jeddah, Saudi Arabia on Wednesday U.S. Secretary of State Mike Pompeo said that Iran is responsible for the attack, telling reporters that the strike was “an act of war.”

It wasn't immediately clear the extent of the damage from the drone attack. (US Official)

However, the Wall Street Journal notes that the Saudis have stopped short of explicitly accusing Iran of conducting the strikes.

Wood concluded that the Saudi's are not pointing the finger squarely at Tehran because that may cause an escalation in an already fraught situation in the region.

"If [Saudi Arabia] names Iran as the aggressor then it's beholden...that they have to respond in some ways," Wood said, "Is their military, which is well-equipped, is it tactically competent? And then are they willing to suffer the consequences of some kind of a conflict when they are so dependent on this energy infrastructure."

Judith Miller, Adjunct Fellow at the Manhattan Institute for Policy Research, Pulitzer-winning journalist and Fox News contributor said that the Saudis know that they are not able to defeat Iran in a full-blown conflict. 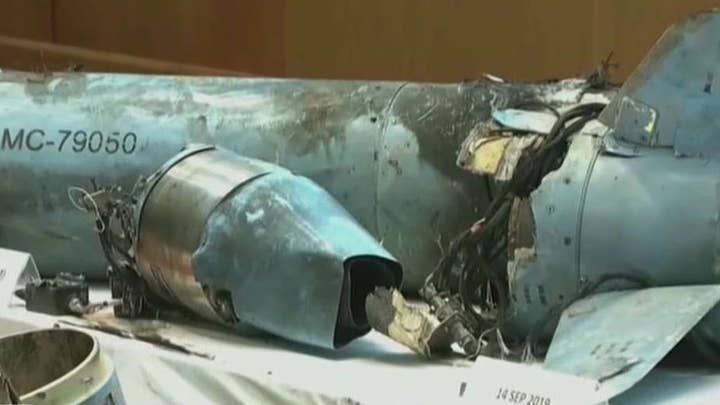 Miller added that President Trump has found himself in a difficult situation, as members of his own party are pushing him to engage the Iranians over this aggression.

"It is the Republicans, Lindsey Graham, General Jack Keane...who really are demanding that something be done...lest we risk even more aggressive action on the part of the Iranians, who at this point may think that they can get away with everything."

Recently, member of the Senate Armed Services Committee, Lindsey Graham R-Sc., tweeted that the President's "measured" response to the downing of a U.S. drone over the Strait of Hormuz this summer emboldened the regime.

The President responded to Graham tweeting, "No Lindsey, it was a sign of strength that some people just don’t understand!"

"The strategy for us leaving could have been to empower allies...the Gulf States and Israel to create a balance of power with Iran and the question is if Iran is just going to totally break the balance then that's not going to create more instability or a situation in which we can leave," he said.