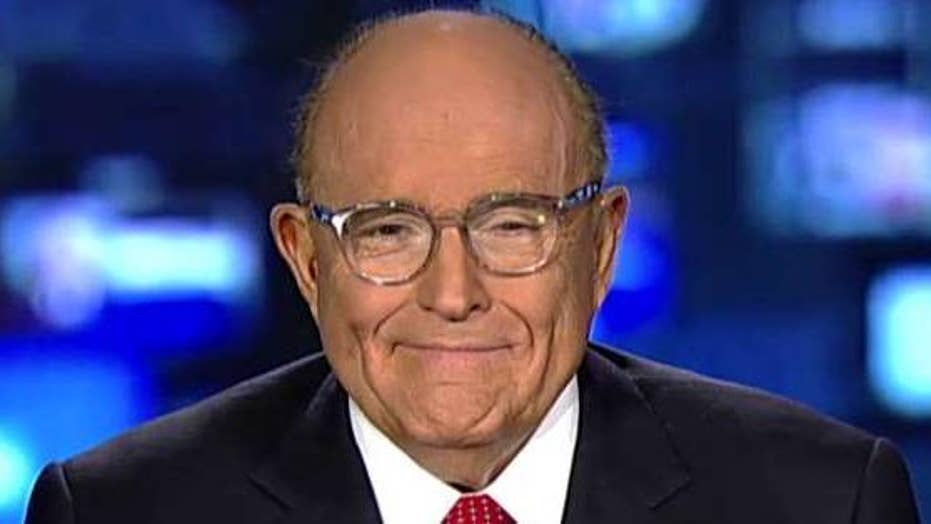 President Trump's personal attorney and former New York City Mayor Rudy Giuliani said Saturday that he is not afraid of being indicted and that he has absolutely no business interest in Ukraine.

Appearing on "America's News HQ" with host Ed Henry, Giuliani said that the "case has been really simple from the day that Joe Biden confessed to committing bribery in 2018."

"Although, he said precisely what was attributed to President Trump a year and a half later...Basically, they'll prove that he committed bribery," he said during the wide-ranging interview.

Giuliani said that the "reality is you'd have to be a fool" to think Biden "didn't know that his son was under investigation." The founder of the company Hunter Biden worked for is currently under investigation, but there is no evidence he himself is being investigated.

In an interview with CNN's Don Lemon on Friday, Biden said that he is "embarrassed" for his former Senate colleague Lindsey Graham, R-S.C., over his request for documents pertaining to Hunter Biden's time on the board of natural gas company Burisma Holdings and Ukraine.

Biden's remarks drew a response on Twitter from Giuliani who wrote that Biden's comments amounted to "a threat to a U.S. Senator," and reminded the former federal prosecutor of "my old mafia cases."

BIDEN FUMES AT GRAHAM OVER REQUEST FOR DOCUMENTS ON SON; GIULIANI BLASTS 'THREAT TO A US SENATOR'

Giuliani told Henry that Biden sounded like a "poor imitation of 'The Godfather,'" adding that Biden wanted to fight with the president "every other week."

"I don't care what he said. He's lying. He's been lying all his life," Giuliani told Henry. "Every place that Joe Biden was a point man...the Biden family came away with millions. And nobody wants to look at it because the Washington press corps protects him."

However, Giuliani's former associate Lev Parnas -- who pleaded not guilty to federal campaign finance violations earlier this month -- is now claiming that he traveled to Kiev shortly before the inauguration of Zelensky to demand the new administration publicly announce an investigation into the Bidens.

Parnas' lawyer confirmed to Fox News that his client told Ukrainian officials that Vice President Mike Pence would not attend the swearing-in of the new president and the United States would freeze aid to the Eastern European nation if the demands were not met.

The claim by Parnas, who has been preparing to testify in the House Intelligence Committee’s impeachment inquiry into President Trump, directly challenged the accounts by Trump and Ukrainian officials that have been at the heart of the congressional probe.

Giuliani said that the lawyer's comments are untrue and that Parnas is "trying to make himself very important."

"We never had that meeting with the president," he said, adding that Parnas "got himself into a grandiose thing" and he could potentially "make himself into another Michael Cohen."

Giuliani also denied a recent Wall Street Journal report stating that he would personally profit from a natural gas pipeline in Ukraine was false and that he was "not going to financially profit from anything that [he] knows of in the Ukraine."

"I can't keep up from the amount of false information printed about me," he exclaimed.

"Are you afraid, Mr. Mayor, that you could be indicted?" asked Henry.

"You think I'm afraid?" Giuliani shot back. "I did the right thing."

He said that he has absolutely no "business interest" in Ukraine, and that it was Ukrainian President Volodymyr Zelensky who had first brought him up in his July phone call with President Trump because of his "reputation."

Giuliani said that he wanted to "exculpate" his client.

"This is ridiculous. [The President] know what I did was order to defend the president -- not to dig up dirt on Biden. This goes back a year ago before Biden [had] even decided to run for president," he said.

"My thought when I began investigating this was to get evidence that will help my client prove that the charges against him aren't true," Giuliani said.

He predicted that "they're ultimately going to prove" that this was a conspiracy to frame the president in which high-level Democrats and White House staff participated.