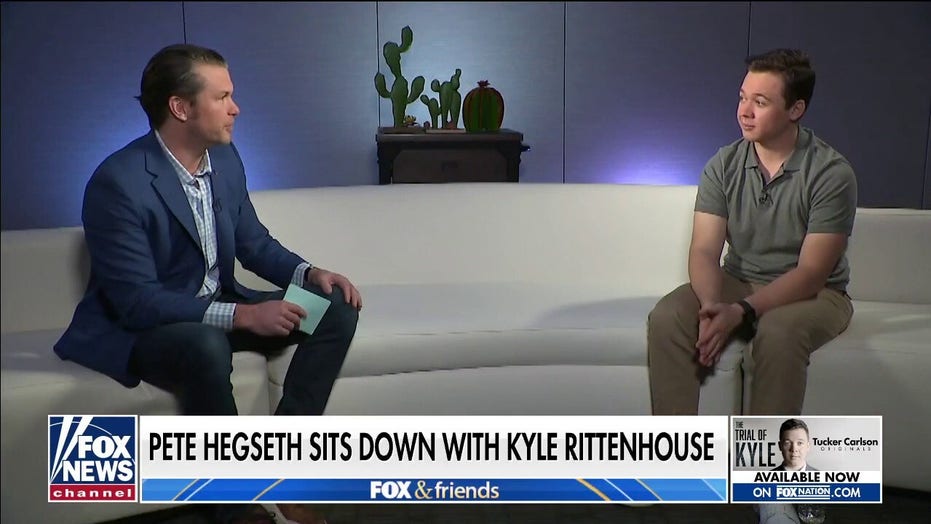 Pete Hegseth sits down with Kyle Rittenhouse on Fox Nation

Kyle Rittenhouse says he feels like justice was served at his trial, calls out mainstream media's mischaracterizations.

"Fox & Friends Weekend" co-host Pete Hegseth previewed his exclusive Fox Nation interview with Kyle Rittenhouse Wednesday, giving viewers a look at his sitdown with the teen who was thrust into the limelight following the Kenosha riots of 2020.

During an appearance on "Fox & Friends," Hegseth played video clips from the interview that showed Rittenhouse calling out the mainstream media over its mischaracterizations of him following his self-defense shooting of two rioters, as well as him saying he felt justice was served with his acquittal on the subsequent murder charges.

"I feel like justice was served on the criminal side but there's going to be some accountability, coming, Pete," Rittenhouse told Hegseth after the latter asked if he felt vindicated following his acquittal.

Rittenhouse hinted in a separate interview with Fox News earlier this week that he would be taking action to hold the media accountable for the negative ways it portrayed him immediately following the Kenosha shootings.

"What’s more powerful in your mind in America today? Is it the legal system, those 12 jurors who held your fate, or is it the media who had the power to characterize or mischaracterize who Kyle Rittenhouse was?" Hegseth asked.

"I would have to say the media because they can have a big influence on the general public and that could have been one of my potential jurors and it could have gone completely different. Thank goodness it didn’t but it could have," Rittenhouse said.

Hegseth asked Rittenhouse what it was like to watch the mischaracterizations about him in real-time, and to hear himself being called a White supremacist and murderer but not being able to defend himself due to the nature of the charges against him.

"It was frustrating because I knew it was all lies. And I was like there is none of that. I’m not a White supremacist or a racist, what the media is saying. And there's nothing to show that and it's just disappointing. I'm like they're supposed to report the truth and the facts, yet, they're out here lying," Rittenhouse said.