Doug Collins questions Pelosi's sincerity about being 'prayerful,' says she should start being 'straightforward' instead

Rep. Doug Collins questioned Speaker Pelosi's sincerity on "Fox &amp; Friends" when she recommended being "prayerful" in the face of political chaos.&nbsp;

After House Speaker Nancy Pelosi, D-Calif., urged Americans to be "prayerful" as the upcoming impeachment fight with President Trump approaches, Rep. Doug Collins, R-Ga., doubted her sincerity on "Fox & Friends" Monday, and told her to be more "straightforward" instead.

"It doesn't appear to be [sincere] when you see the actions," Collins said. "Don't follow the words. Follow the actions. If this was so somber, if this was so serious, then she would do [what] has been done in the past and have a very straightforward process in which every side is represented."

Pelosi commented on the upcoming political battle during the Texas Tribune Festival in Austin on Saturday and said the country should remain "somber" and "prayerful" while the inquiry is underway.

"This is a very sad time for our country. There is no joy in this," she said. "We must be somber, we must be prayerful and we must pursue the facts further to make a decision as to, did this violate the Constitution of the United States? Which I believe it did." 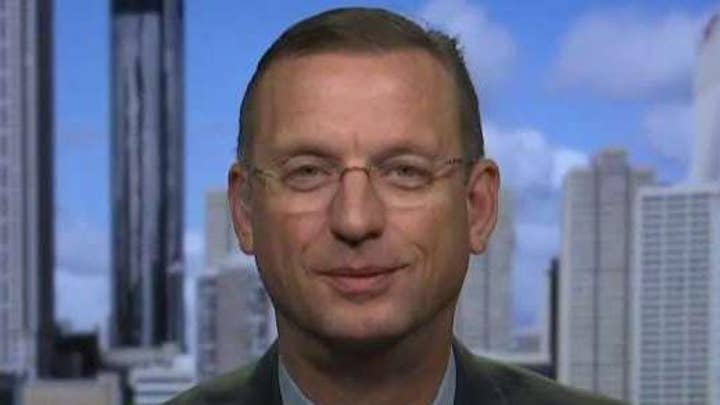 Pelosi also claimed to be "heartbroken" about the situation, and said she wished exculpatory evidence existed that could help exonerate the president, before labeling the situation a "cover-up."

"I'm heartbroken about it. I would just have hoped that there would be something exculpatory, something that would say, 'This is not what it seems to be,' but that's not where we are right now," she added. "I think that right now there's a cover-up of the cover-up. This really goes beyond."

Collins said if Pelosi and congressional Democrats truly had the courage of their convictions, they would put the issue to a vote on the House floor and allow the republic to function as it was intended.

"If it was a true inquiry, she would put it on the floor -- she'd make her members vote for it so, in the end, we would actually have a process that happened under [Bill] Clinton and happened under [Richard] Nixon, where both sides are represented," he said. "This is just not fair. The American people will see through this."