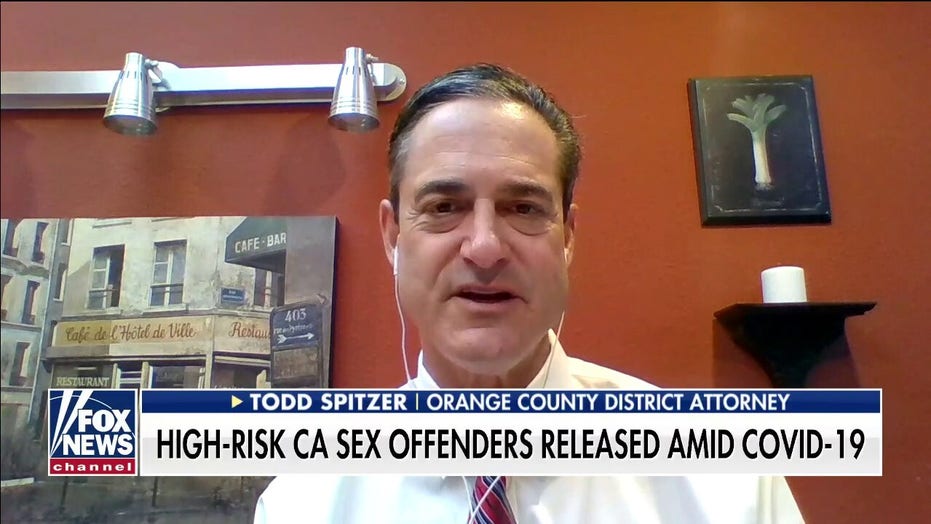 Orange County, Calif. District Attorney Todd Spitzer stated Saturday that he is "outraged" after the state ordered the release of seven high-risk sex offenders from the county's jails over concerns they could contract coronavirus.

Appearing on "Fox & Friends Weekend" with host Jason Chaffetz, Spitzer said that the issue at hand is not just in Orange County or California, but "is a ruse that has been pulled on the American public, on jails and custodial facilities all over the nation."

"We've all been told that during the pandemic we needed to release people early, you know, with less than 30 days on their sentence and things like that because of the underlying health pandemic and the fact that we needed to exercise social distancing within the custodial facilities," he remarked.

"However, as you know, in the United States today there is a social justice agenda to end bail for those who are incarcerated and this has gone too far.

"In other words, in Orange County, our jails now are down by 45 percent in terms of their capacity. Our sheriff has indicated he has no overcrowding problem at all. So, why do our magistrates- in this case, one court commissioner -- continue to release people early?"

California Gov. Gavin Newsom speaks to reporters about his executive order advising that non-essential gatherings of more than 250 people should be canceled until at least the end of March, during a news conference in Sacramento, Calif., Thursday, March 12, 2020. (AP)

According to Spitzer's office, Court Commissioner Joseph Dane ordered the controversial releases of seven high-risk offenders throughout April, despite the men having been charged with tampering with their GPS monitoring devices.

The move prompted the District Attorney's Office to issue a safety warning to the community this week, highlighting that the men are likely to re-offend.

"These kinds of high-risk sex offenders are the most dangerous kind of criminal and the most likely to re-offend," Spitzer wrote in a statement. "They are doing everything they can to avoid detection by the parole officers assigned to monitor them so they can potentially commit additional sex offenses. These are not the kind of people who should be getting a break."

While the issue of coronavirus outbreaks in jammed U.S. prisons has been a cause of concern nationwide in recent weeks, this mandate has proven to be particularly controversial as only a small number of the "non-violent" 3,500 California state prisoners given early release as a result of the virus, officially termed COVID-19, were even tested for the contagion, according to local officials.

Orange County Sheriff Don Barnes also argued in a statement released Wednesday that the jails are not currently overcrowded, social distancing and quarantine measures have been put in place, thus stressing that freeing these inmates was not necessary.

"These inmates were released by court order, and are not in any way connected to the measures I have taken to limit the spread of COVID-19 in the Orange County Jail," said Barnes. "We have responsibly created the capacity needed in the jail to house sex offenders and other dangerous criminals. I oppose efforts that excuse criminal behavior and jeopardize the safety of our community."

In profiles documented by the local news affiliates of the newly free men as part of the community warning -- their ages range from 27 to 52 -- every single one "has a history" of lewd offenses and has violated the law on multiple occasions.

One of the offenders released from jail early has since been charged with exposing himself at a parole resource center, according to a report.

The sentence was imposed after Magdaleno was accused of failing to charge his GPS monitor.

"In this case, you had seven convicted predator sex offenders who had gone to state prison in California for...hard core serious sex offenses and they were cutting off their GPS devices or failing to charge them," Spitzer continued. "We had two individuals like this in Orange County before who went out and murdered four women after they cut off their GPS devices."

Spitzer also told Chaffetz when tampering with a GPS device, offenders are required to do 180 days minimum in the local jail.