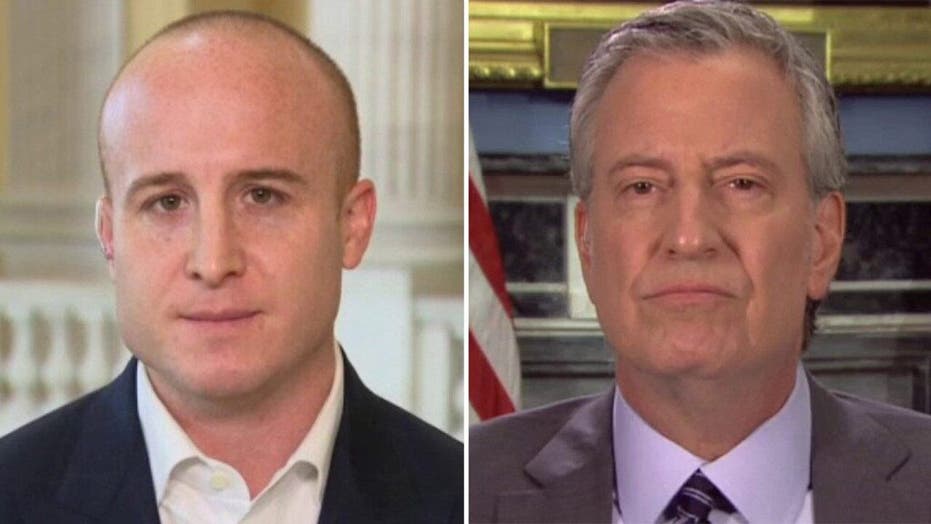 New York Rep. Max Rose is ashamed that Bill de Blasio is a Democrat and tells him to 'stop playing politics'

Congressman Max Rose, who called Bill de Blasio ‘the worst mayor in the history of NYC,’ says the NYC mayor needs to ‘stop playing politics and start doing his job.’

As New York City seemingly continues down its path of steady decline, the political hits continue to come at Mayor Bill de Blasio from both sides of the aisle.

On Thursday, when asked about a recent ad Rep. Max Rose, D-N.Y., released calling de Blasio “the worst mayor in the history of New York City,” the mayor responded saying Rose “is just a politician running for office and he’s wrong.”

In an interview with Fox News, Rose said he is “ashamed that Bill de Blasio is a Democrat with the way he’s acting,” and refuted the mayor's remarks which imply that the congressman’s criticisms are solely for the purpose of helping him in his tight congressional race against GOP candidate Nicole Malliotakis.

“I would prefer it if the mayor didn't think so much about advertisements and actually started doing his job. Let's think about that,” Rep. Rose told Fox News. “My response to the mayor is plain and simple. If you don't want to be considered the worst mayor in the history of New York City, do your damn job. Stop playing politics.”

Rose went on to call out his own party for “not giving a damn” about the deteriorating quality of life within major U.S. cities, and accused fellow Democrats of making decisions based on what will reflect well on social media.

The congressman is not the only one concerned with the quality of life in the city. Last week, over 160 business executives in NYC signed a letter to de Blasio urging him to take “immediate action to restore essential services” in fear that worsening living conditions will prevent the city’s economy from bouncing back following the coronavirus lockdowns.

The letter continued, "There is widespread anxiety over public safety, cleanliness and other quality of life issues that are contributing to deteriorating conditions in commercial districts and neighborhoods across the five boroughs."

“The letter could not have come soon enough,” Rep. Rose said. “What we are seeing are mini Amazon debacles day in and day out where this mayor is almost luxuriating in the ways in which he is chasing businesses out of New York City. Guess what that means? You have less business in New York City — that's less tax revenue you have to raise salaries and to help people.”

Rose said he did not vote for de Blasio in 2014 nor 2017, and despite the many calls for the mayor to step down, he is not holding his breath for a resignation anytime soon. But he believes in lieu of action from city leadership, the federal government is responsible for stepping up with “significant state and local aid.”