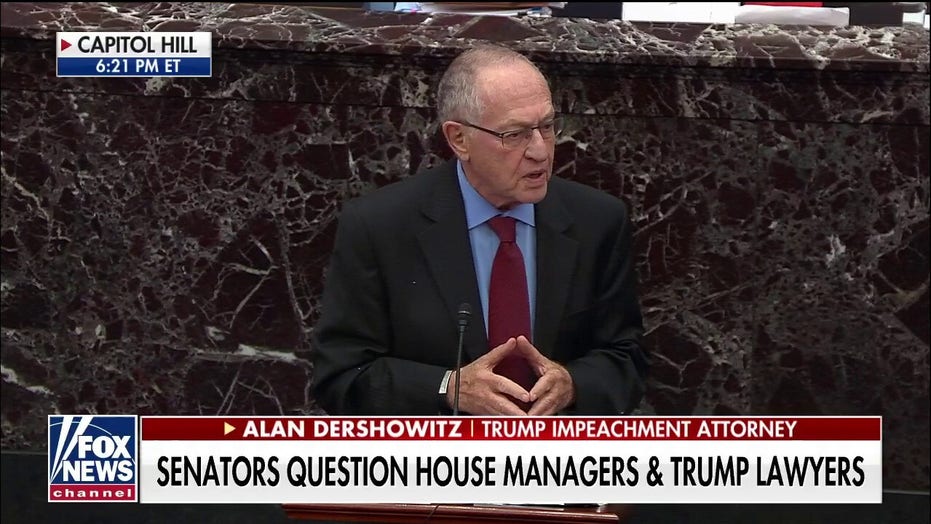 Harvard law professor Alan Dershowitz had a testy exchange with MSNBC host Ari Melber Friday, one day after he claimed the cable network distorted his comments in the ongoing impeachment trial of President Trump.

Dershowitz defended his controversial claim that Trump could, in his dealings with Ukraine, legitimately seek to help his re-election as part of the public interest. Democrats have accused Trump of improperly trying to pressure Ukraine to investigate the Bidens in order to help his prospects in the 2020 presidential election.

"The point I was making was that the president can't do anything illegal, he can't do anything impeachable, but if he does something absolutely proper and the purpose is a mixed purpose -- part of it is to get himself elected -- then the fact that he had a mixed motive can't turn innocent conduct into guilty conduct," Dershowitz said.

"I gave an example, which has not been quoted in the media," added Dershowitz, referring to a portion of his argument that cited the actions of President Abraham Lincoln. Melber responded by suggesting Dershowitz's media criticism was unnecessary and unwarranted.

ALAN DERSHOWITZ TEARS INTO CNN ON CNN: YOUR NETWORK 'DISTORTED' MY ARGUMENT TO 'MISINFORM VIEWERS'

"I just have to point out and then I'll let you finish, sir," Melber said. "You cannot complain about not being quoted in the media when you're getting time here for the purpose of quoting you -- so please go ahead and tell us but we can do it without the media criticism. I'm affording you the time."

"Well, but there's been days and days of attack based on a false description of what I said," Dershowitz shot back.

In a tweet from Thursday, Dershowitz suggested MSNBC and CNN tried to take "advantage of the fact most of their viewers didn't actually hear the [S]enate Q and A."

KURTZ: GOP COULD WRAP UP TRUMP TRIAL AMID DERSHOWITZ FUROR

It's unclear exactly which statements he was referring to, but the renowned professor similarly took CNN to task on Thursday night.

Dershowitz was asked by CNN anchor Wolf Blitzer how he was "misinterpreted," but the professor insisted there was a "deliberate" attempt by the media to take him "completely out of context."

"I never said, never suggested -- and it was a total distortion, not misunderstanding, distortion of my point," Dershowitz told Blitzer. " ... I think a president can do anything if he thinks his election is in the national interest. I never said it, it's nonsense, and your network should never have said that I said it repeatedly.

"Well, we were only playing clips of what you said on the floor," Blitzer replied.

"Yeah, you played a clip that you selected, not the context," Dershowitz answered.

The Harvard Law School professor emeritus then battled CNN legal analyst Jeffrey Toobin, a former student of his, and continued to lambast the anti-Trump network.

"I think all of you had a responsibility to answer my Lincoln analysis and nobody did, nobody looked at the context, nobody looked at what I was answering. All you did was take that one little snippet, took it out of context, and had everybody attack me for something I didn't say, I don't believe, and I didn't even imply," Dershowitz continued. "That's my argument. Please present it fairly, then rebut it. But don't make up an argument I didn't say.'