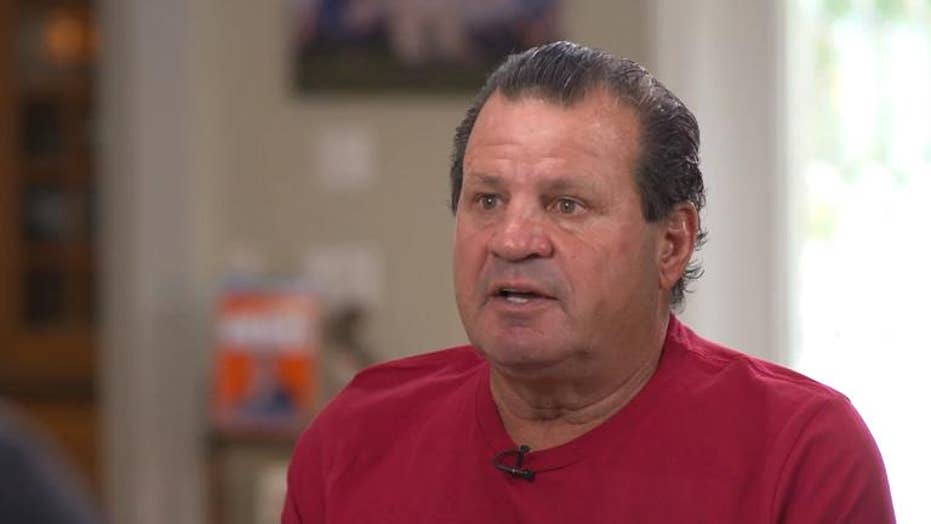 Giving back is very important to Mike Eruzione, captain of the 1980 "Miracle On Ice" USA Olympic hockey team that famously defeated the Soviet Union to win the gold medal.

In a recent episode of Fox Nation's "Nuff Said," Eruzione told Tryus how he recently came into a large amount of money after winning an "Olympics edition" of "Who Wants to Be a Millionaire."

Eruzione has long been active with charitable causes, dating back to his days as an athlete, and he continues to have an impact on aspiring hockey players at his alma mater.

Mike Eruzione, captain of the 1980 gold medal-winning U.S. Olympic ice hockey team, posed next to the jersey and uniform he wore when the U.S. defeated the Soviet Union in what is known as the "Miracle on Ice" at Heritage Auctions in New York City in 2013. (REUTERS/Mike Segar)

"Years ago I sold all of my memorabilia -- my jerseys, my stick -- and I got around $1.2 million," he said. "I endowed a scholarship with it at Boston University for my mother and father, so a hockey player gets that."

"You have to always give back and help others," Eruzione said, quoting his mother, who instilled in him the importance of humility and generosity at a young age.

Eruzione rose to fame in 1980 after he scored the game-winning goal and secured the gold medal for Team USA, when they defeated the Soviet Union in Lake Placid, N.Y.

Forty years after the game that changed his life, Eruzione sat down with "Nuff Said" host Tyrus in his Boston home to discuss his upbringing, family and how he maintained a simple life despite his high-profile status.

"Most people, given that level of success and basically a whole nation behind you, might have an ego problem, might get caught up in the bling of it all," Tyrus said, asking Eruzione's secret to his unwavering humility.

"It was the town I grew up in. Winthrop has a bridge and I always felt when I crossed that bridge and the gate closes behind me, I was home. My friends that I have here I've had for 50 years... They keep me humble," Eruzione said.

"I never thought an athletic adventure changed who you are. It changed the opportunities I've been given, but I got a beautiful home, I've got three great kids, five great grandkids, I've got a wife...and why change?"

"And," he continued, "I never thought an athletic adventure changed who you are. It changed the opportunities I've been given, but I got a beautiful home, I've got three great kids, five great grandkids, I've got a wife... and why change."

"Just because I won a gold medal doesn't mean I'm any better than anyone else," he added. "I just happened to be fortunate to win. And I just felt that it shouldn't change me as a person because I was very happy about who I was before the Olympics, and why become somebody different."

Later in the segment, Tyrus reiterated his surprise at the Olympic star's humility.

"I thought your greatest quality would've been that goal and effort, but your humility is inspirational and humble," Tyrus said.

"I can look at it two ways," Eruzione said. "If we lost, I'd still be living in my hometown. I'd still be married to the same girl. I might have more kids because I'd be around more... But I'd be coaching and teaching, and that's what maybe I was meant to do."

"So we did win, and I'm able to do something else with it -- so my life's path has taken a different route," he added. "But again, it hasn't changed me, who I am. I was very happy with being Mike Eruzione before the Olympics, and I'm just as happy now."

To watch the full episode, featuring more from Eruzione on his upbringing and the setbacks that lead him to his career as a gold medalist, join Fox Nation and watch the latest "Nuff Said" today.