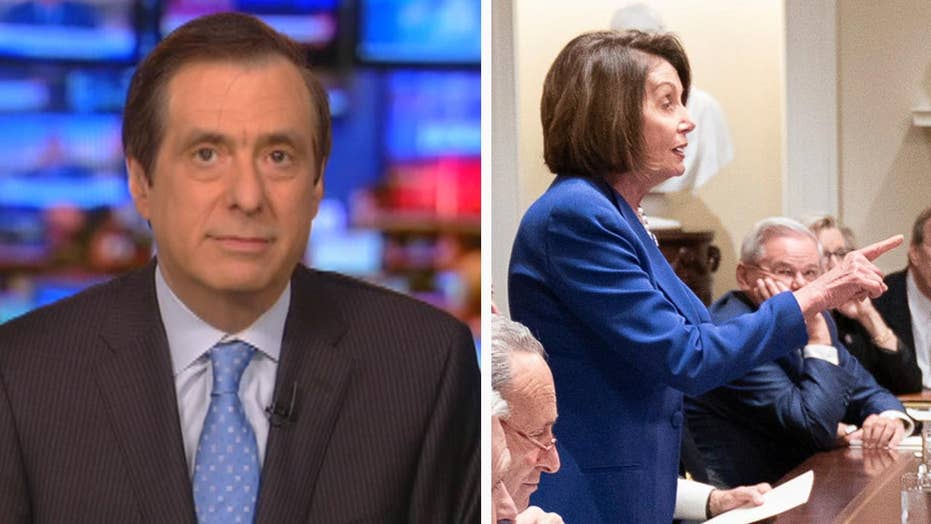 Howard Kurtz: Why the press loves the Trump-Pelosi ‘meltdown’ meeting

'MediaBuzz' host Howard Kurtz weighs in on the media reaction to the Trump-Pelosi feud after she and Chuck Schumer abruptly left the meeting with President Trump.

And he’s losing one of them.

Trump may have taken a step toward salvaging the situation in Syria when Vice President Pence announced in Ankara that Turkey has agreed to a temporary cease-fire. But politically, Trump suffered a rare repudiation by his party when two-thirds of House Republicans backed a resolution disapproving of his decision to withdraw American troops.

That included such leaders as Kevin McCarthy, Steve Scalise and Dick Cheney. Mitch McConnell has been critical in the Senate, and Lindsey Graham said he’s prepared to be “President Trump’s worst nightmare” on the issue.

ELIZABETH WARREN, DEBATE TARGET: HERE’S WHY IT MAY NOT MATTER

At the same time, the president has watched a series of diplomats march up to the House and deliver damaging testimony about him and Ukraine—including, Thursday, his appointee Gordon Sondland.

His own acting chief of staff delivered a setback Thursday by essentially admitting to a quid pro quo. Mick Mulvaney told reporters that Trump held up military aid to Ukraine: "Did he also mention to me in the past the corruption that related to the DNC server? Absolutely. No question about that. But that’s it, and that’s why we hung up the money.” In walking it back later, Mulvaney complained that "the media has decided to misconstrue my comments to advance a biased and political witch hunt against President Trump." Except no journalistic interpretation was needed for the on-camera remarks.

And the media were practically gleeful when a White House meeting—on Syria, as it happens--ended with House Democratic leaders walking about and complaining of a Trump diatribe.

“He was insulting, particularly to the speaker,” Chuck Schumer told reporters, adding: “He called her a third-rate politician.” (Other accounts said Trump used “third-grade.”)

“What we witnessed on the part of the president was a meltdown, sad to say,” Nancy Pelosi agreed.

The president’s tweeted rebuttal: “Nancy Pelosi needs help fast! There is either something wrong with her ‘upstairs,’ or she just plain doesn’t like our great Country. She had a total meltdown in the White House today. It was very sad to watch. Pray for her, she is a very sick person!”

Ladies and gentlemen, your United States government. And it’s worth noting that it was Trump who walked out of a meeting with Chuck and Nancy last January after a similar spat.

Commentators and even some news anchors were quick to adopt the Pelosi pushback that Trump had suffered a “meltdown.” The Democratic narrative is that he’s losing it.

This argument was bolstered, according to the media, when Trump released a shockingly blunt letter he had sent to Tayyip Erdogan:

And Trump, who ran against endless wars, has defended his stance by saying the Kurds are “no angels” and “what does that have to do with the United States of America if they’re fighting over Syria’s land?”

None of this means impeachment is a step closer. Indeed, while a new Gallup poll says 52 percent of those surveyed believe Trump should be impeached and removed, only 6 percent of those are Republicans. (This is quite similar to a much-criticized Fox poll that put the top figure at 51 percent.)

But my sense is that while many Republicans welcome the chance to demonstrate their independence on foreign policy, they are still dead set against impeachment.

Still, the latest news on that front has hardly been favorable to the White House.

Mick Mulvaney, the acting chief of staff, said in the little-used briefing room yesterday that federal aid to Ukraine was held up in part because of Trump’s demands that the country investigate possible corruption by Democrats.

“The look-back to what happened in 2016 certainly was part of the thing that he was worried about in corruption with that nation. And that is absolutely appropriate,” Mulvaney said.

He also said of Trump: “Did he also mention to me in passing the corruption related to the D.N.C. server? Absolutely. No question about that. But that’s it, and that’s why we held up the money.”

Sondland, meanwhile, gave the press his opening statement before testifying that Trump told him to work with Rudy Giuliani on Ukraine. He was “disappointed” by that because “the men and women of the State Department, not the president’s personal lawyer, should take responsibility.” Sondland said he didn’t realize until later that Giuliani’s goal may have been “to involve Ukrainians, directly or indirectly, in the president’s 2020 re-election campaign.”

The impeachment probe and the Syria situation aren’t strictly related. In fact, Pelosi made a point of saying a foreign policy disagreement would never be grounds for impeachment. But the combined force is adding to a sense of things spinning out of control—making an alleged meltdown less important than political paralysis.