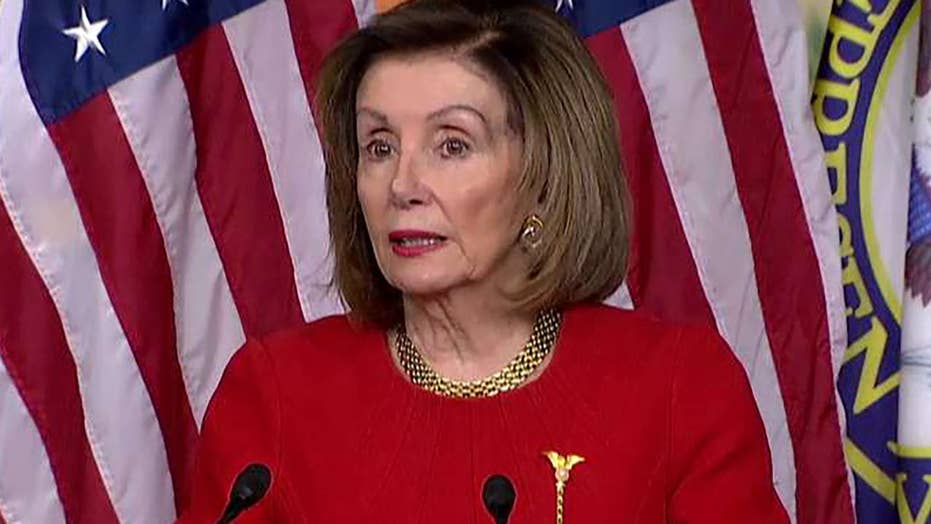 House Speaker Nancy Pelosi praises the 'moral courage' of her caucus after the House votes to impeach President Trump.

House Speaker Nancy Pelosi on Thursday defended her decision to hold off on sending impeachment articles to the Senate, calling Mitch McConnell a "rogue leader" in an unusual press conference where she repeatedly tried to shut down questions about the impeachment process.

Pelosi spoke to reporters after Democrats passed two articles of impeachment against President Trump in a Wednesday evening vote. She indicated the House would eventually send the articles over to the upper chamber but insisted it is up to the Senate to determine how the process develops going forward.

“The next thing for us will be when we see the process that is set forth in the Senate, then we’ll know the number of managers that we may have to go forward, and who we would choose,” Pelosi said Thursday.

After an impeachment in the House, the articles are normally sent over to the upper chamber for an impeachment trial, but Pelosi signaled earlier that the House is waiting for the Senate to set out how Trump's trial will be conducted before they determine next steps, such as designating impeachment managers who will represent them. This prompted outrage from Republicans who worried she would simply refuse to transmit the articles, thus denying Trump the chance at acquittal.

Pelosi made clear Thursday that she is not prepared to name those managers yet "because we don't know the arena we are in." As she did Wednesday, Pelosi insisted House Democrats want to see a "fair process" -- and she dismissed GOP allegations about what her intentions may be.

"Frankly, I don't care what the Republicans say," she said. 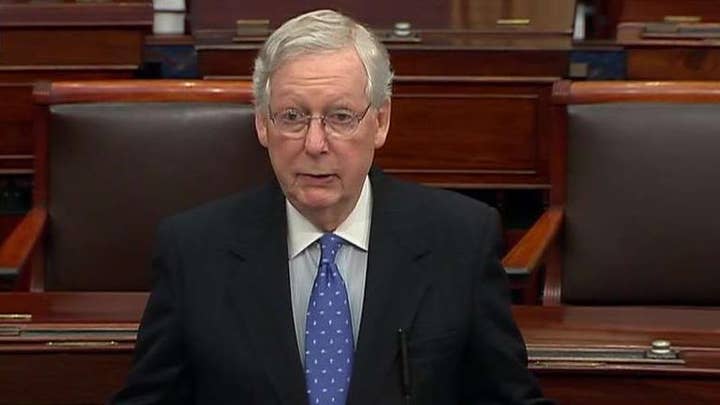 Earlier Thursday morning, Senate Majority Leader McConnell, R-Ky., said Democrats may be “too afraid” to send the articles of impeachment to the Senate.

"Looks like the prosecutors are getting cold feet," the Senate GOP leader mused.

McConnell also criticized the impeachment in remarks on the Senate floor, calling it “a rushed and rigged inquiry.”

Pelosi shot back at her press conference, saying that while the country's founders planned for a "rogue" president, "I don't think they suspected that we'd have a rogue president and a rogue leader in the Senate at the same time."

While responding to Republicans and speaking in vague terms about the next steps in the process, Pelosi repeatedly sought to turn back additional questions about impeachment from reporters on Thursday, stressing legislative action on trade and other matters that had taken a back seat to impeachment until recently.

Broadly speaking, she said: "I have a spring in my step because of the moral courage of our caucus."

Pelosi is expected to meet soon with Senate Minority Leader Chuck Schumer, D-N.Y., about a Senate trial. On Sunday, Schumer had requested that the Senate issue subpoenas for documents and witnesses who had not testified during the House's impeachment inquiry. McConnell responded by stating that the House should have been more thorough, and it was not the Senate's role to do the House's "homework" for them.