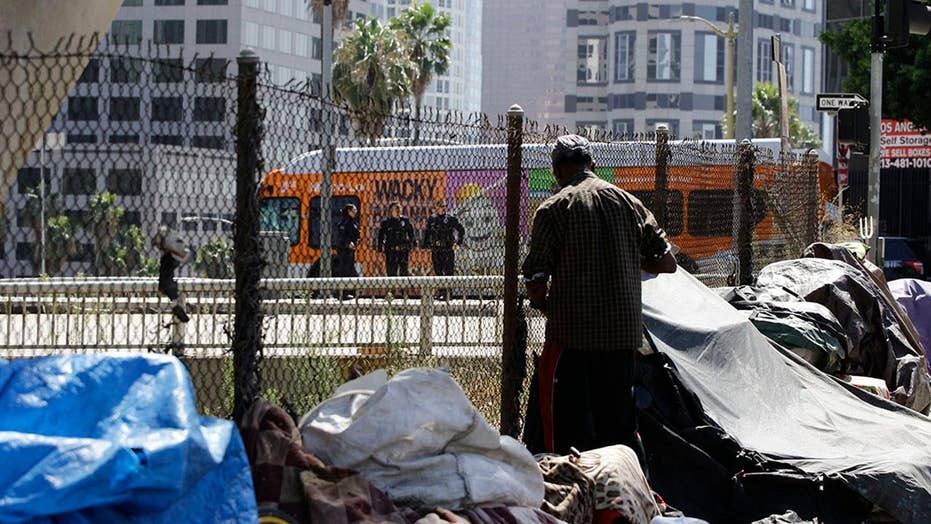 New York City Mayor Bill de Blasio is under fire for spending millions to move his city's homeless population across the country; reaction on 'The Five.'

"The Five" co-hosts commented Friday on the homeless crisis, responding to a lawsuit filed by Newark, N.J., against New York City, and accusations that New York Mayor Bill de Blasio is attempting to move the homeless to New Jersey.

Co-host Jesse Watters compared de Blasio to a "person with a leaf blower pushing leaves into another person's yard," prompting co-host Martha MacCallum to accuse the mayor of "passing the buck."

"Bill de Blasio, once again is, you know, sort of passing the buck in a way that he loves to do. And then he comes back and blames it, says that they're insensitive and heartless about homeless people," MacCallum said. "'You know, these are just working people who are looking for another chance in life.' Why don't you provide them that chance here?"

Newark -- New Jersey's largest city -- filed a federal lawsuit against New York City and de Blasio on Monday claiming recipients of the subsidized rentals are ending up living in poor conditions, according to the New York Post.

"It's not about picking on the homeless or picking on some Democratic mayor or a Democratic city saying, 'Oh, it's those liberals and they're soft, these issues,'" Williams said. "No, I think it's all of us that have to deal with this in an era of high income inequality."

MacCallum said it wasn't "an economic problem" but that it also isn't a problem that just money can fix.

"So it is a problem of drugs. It's a problem of mental illness. And those issues need to be addressed in a compassionate way," MacCallum said. "I completely agree. And with housing, which I think Ben Carson has worked on doing in California in the projects that he's been doing, but yet throwing money at it as we learn time and time again is not the solution."