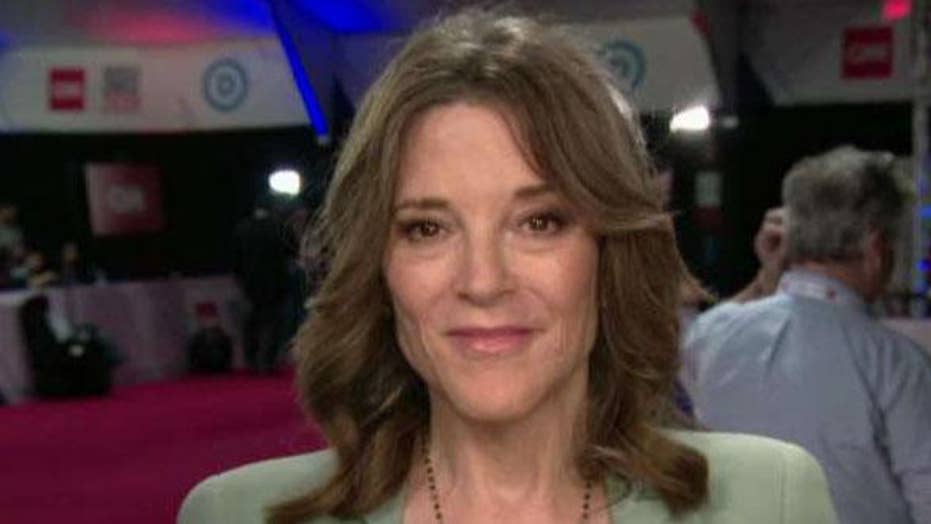 Democratic presidential candidate Marianne Williamson on her performance in the second debate and her hopes of appearing in the next round.

Democratic presidential candidate Marianne Williamson defended controversial comments she has made in the past about mental health and antidepressants during a contentious interview Thursday.

The self-help author is under increased scrutiny after she received positive reviews for her debate performance this week in Detroit, during which she called the Trump administration a "dark psychic force."

“Not all drugs numb you or mask you," Anderson Cooper asked Williamson, referencing comments she had made about antidepressants. "And telling a seriously depressed person that taking an antidepressant they’re going to be numbed — isn't that not a good message?”

Williamson told Cooper he was mischaracterizing what she had said.

“What I have talked about is a normal spectrum of human despair,” she explained, rather than clinical depression.

“If you’re on an antidepressant, you’re not numbing your pain. You’re actually trying to feel again, no?” Cooper pressed.

“Some people would argue that some people not,” she answered. “There is value sometimes in feeling the sadness, feeling that dark night of the soul.”

“There is value sometimes in feeling the sadness, feeling that dark night of the soul.”

“We have lost our sense that there are times when sadness is part of life,” she added.

She said she has questioned how clinical depression “is looked at” after Cooper reminded her she had once suggested the diagnosis was a “scam.” She explained that was a glib comment that she regretted and apologized for.

Cooper then pressed her about a Twitter message she posted after actor Robin Williams’ death, suggesting it was related to the use of antidepressants. The tweet linked to an article written by an organization funded by the Church of Scientology, which doesn’t believe in psychiatry.

“Anderson, if somebody is helped by an antidepressant, I’m happy for them,” she said, adding that she never suggested anyone get off the medication.

She said she believes spiritual leaders are as qualified as medical professionals to talk about “deep sadness” and depression and said that “medicalization” of depression only happened recently.

Williamson, who appeared to grow increasingly frustrated with the 16-minute interview, accused the CNN host of not letting her speak and not giving her enough time to express her point of view.

“I felt very little respect here,” she told Cooper. “And the idea that I am glib about that conversation is a complete mischaracterization and misrepresentation of my career.”

Cooper concluded the interview by inviting her back to discuss the issue again.