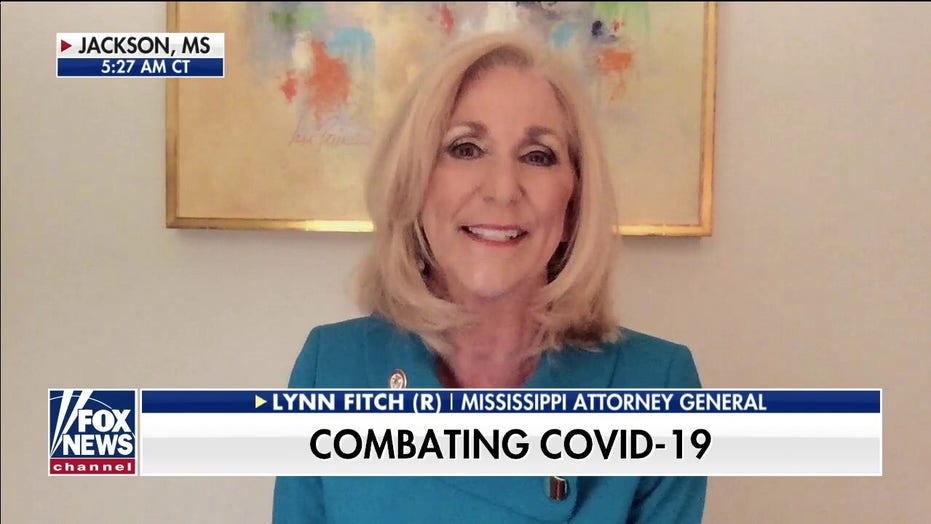 Mississippi Attorney General Lynn Fitch told 'Fox &amp; Friends Weekend' their lawsuit against China will be 'tough' but that they must 'hold them accountable'

Fitch, who has sued the Chinese government in hopes of holding it liable for the pandemic, said on "Fox & Friends Weekend" that her role is to protect the health, security and prosperity of Mississippians.

The suit, she said, "allows Mississippians to seek justice and hold China accountable. Because if you look at what they've done, this has been a very malicious ... a very dangerous cover-up."

"The coronavirus has killed. The coronavirus has caused serious medical damage and harm across our country, our state. It's destroyed our businesses, and it's functionally altered the way Americans will live," Fitch said. "We have to rebuild. ... We see the damages, the issues that they [China] have caused Mississippians. So I'm bringing the suit on behalf of Mississippians."

China is rejecting calls by some U.S. officials to allow inspectors into laboratories in Wuhan and elsewhere where scientists study pathogens similar to the coronavirus. (AP)

On Saturday morning, there were 905,000 confirmed coronavirus cases in the United States and nearly 52,000 deaths. Mississippi has seen upwards of 5,400 cases, with more than 200 deaths.

While U.S. officials are investigating the origins of the virus, the Chinese are rejecting calls to give international inspectors access to Wuhan labs to make sure dangerous pathogens similar to the COVID-19 virus are not being released accidentally.

On Thursday, Beijing's ambassador to the United Kingdom, Liu Xiaoming, accused the United States of “blaming” and “bullying” China, and asserted that the Chinese government has been “transparent, open” and “very quick” in its response to the outbreak. China has vehemently denied any responsibility in spreading the virus.

Fitch, a Republican, called her lawsuit "the right thing to do," adding, "We must hold them accountable."

"They've gone in and they have silenced doctors and journalists and whistleblowers. They have caused us not to be prepared and this has damaged us on so many levels: loss of life; economic damages," she told "Fox & Friends" host Pete Hegseth.

"And so, it's a tough one, but we're going to win because we're going to hold them accountable, and we must do that in order to make them not go down this path," she said. "They cannot continue to deceive and take advantage of America."